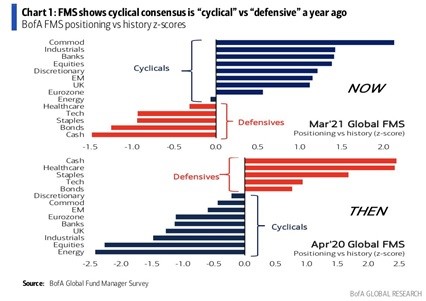 The chart below shows what investors consider to be the biggest tail risks according to the Bank of America March poll. The COVID-19 vaccine rollout is no longer the biggest risk factor as it fell from almost 30% to almost 15%. Some are saying this indicates the pandemic is over. That’s overzealous and also incorrect if you’re looking to the market to decide when it’s over. Of course, the pandemic is not over because people are still dying from it. The 7 day moving average of deaths per day in America is 1,173. That’s still quite high. It’s ironic that right after this poll was done, news that some European countries suspended the use of the AstraZeneca vaccine came out.

If you’re looking to the market to project when the pandemic is over, the beginning of the end of the pandemic was in early November when the positive vaccine news came out. This survey just shows how little good vaccine news will impact the markets. There’s a high probability that the pandemic will be over this summer in America. On the other hand, bad news would be devastating because expectations are so optimistic. The two biggest risks are almost the same thing. They are higher than expected inflation and a tantrum in the bond market. Long term treasury bonds will sell off if inflation is higher than expected.

Sometimes investors blame quick moves in the long bond for selloffs in risky stocks. We find this absurd because the long bond has actually reacted quite slowly to the news of more stimulus and strong vaccine distribution in America. The fact that the bond market is still selling off now without any major news in the past few weeks shows how delayed the reaction has been. We’d call the move swift if the 10 year yield had hit 2% in January. If you own a stock that crashes because the 10 year yield is at 2%, you have a terrible stock. A 2% 10 year yield is very low historically. That stock probably was destined to fall anyway.

The Bank of America fund manager positioning measurement in March 2021 versus history is a lot different than it was last April when the first wave of the pandemic was cresting. As you can see, investors were very overweight tech, healthcare, staples, and cash in April 2020. Bank of America labels these stocks as defensives, but that’s up to interpretation.

For example, if you wanted to defend your portfolio against the risk of inflation, you would buy energy and bank stocks. If you want to defend against the risk of a pandemic, buy tech stocks because they benefit from lower economic growth. The z-score of energy was -2.5 in April 2020. Now it’s slightly negative. In the past few weeks, energy has cooled off after a great start to the year. Since the close on March 1st, the OIH oil services ETF is down 5.7%.

There probably won’t be an extremely dramatic end to the ‘long cyclicals’ trade. In early November, we experienced the largest factor moves ever. We always knew that if a vaccine came out, the cyclical stocks would beat the secular growth stocks. It was just a matter of discovering a vaccine and distributing it effectively. It will be interesting to see what catalyzes the end of the cyclical outperformance. The next negative catalyst probably won’t be as bad as COVID-19. You don’t want to anchor yourself to 2020. The 10 year yield probably won’t fall below 0.5% for a long time. We might never see negative oil again. Value stocks probably won’t get that oversold relative to growth stocks for years.

As you can see from the chart below, the lowest percentage of investors said they were overweight tech since 2009. Don’t anchor yourself to 2020 or the last expansion. There is no law that says fund managers need to be very overweight tech. This positioning can easily stay this way for a few months if the 10 year yield keeps climbing.

The Fed didn’t hike rates in March shocking no one. It’s a huge mistake to think the Fed will hike rates this year or next year. Anyone making that mistake isn’t listening to the Fed call the coming bout of inflation temporary. It’s a little bit easier to call inflation temporary now with CPI so low. It will get harder this summer when CPI rises, but the Fed will stick to its plan.

There has been a lot of positive vaccine news, the breakeven inflation rate has spiked, and two stimulus plans passed since the last dot plot in December. The fact that all this big news only caused 2 more Fed members to see a hike in 2023 is extremely dovish. The Fed has a new framework. It is letting the economy run hot. Investors should get used to this.

As we mentioned, a lot changed since December. This caused the Fed to increase its 2021 GDP growth forecast from 4.2% to 6.5%. Even with that change, it doesn’t see hikes through 2023. We mentioned that there might be a moment where the Fed and the market clash this summer. That may have come early because much of the growth upgrade has been made, yet the Fed stayed dovish. It’s unlikely that the Fed substantially raises its 2021 GDP growth forecast.

This article shows the huge divergence among market participants and the Fed. Investors think higher than expected inflation is the biggest tail risk the market faces. The Fed is only predicting 2.4% PCE inflation and 2.2% core PCE inflation this year. If that projection is met, the Fed probably won’t hike rates in the next 3 years.