Stocks Begin To Price In 2020 Election 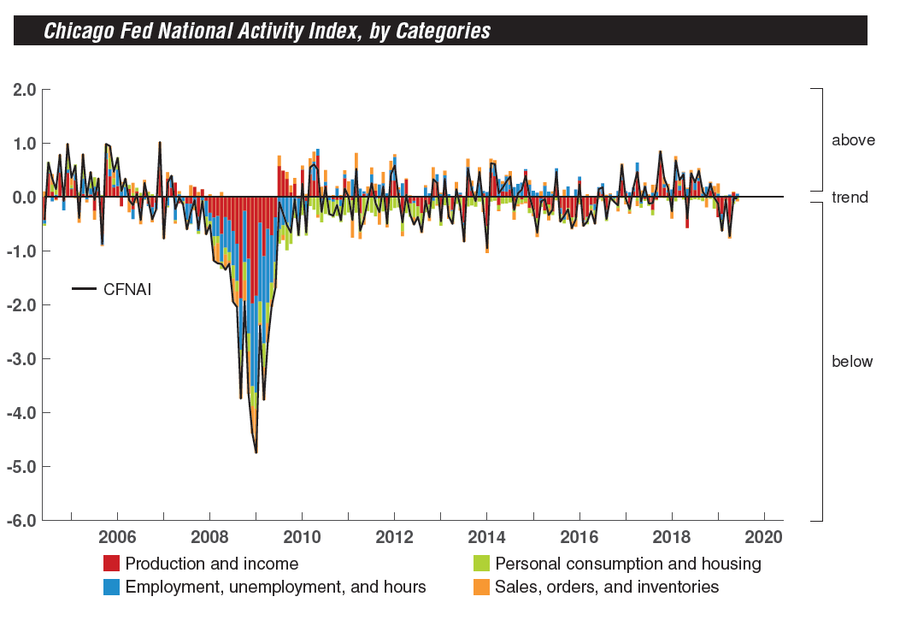 It’s very easy to negatively spin the Chicago Fed National Activity Index (CFNAI), but that not the way we do things. The big negative story is that the Chicago Fed index has been negative for 7 straight months. Every prior negative streak of 7 or more months has coincided with recessions since the 1960s. However, it’s important to reign back those recession calls because the June index was only negative 2 basis points as you can barely see in the chart below.

Only 51 of the 85 indicators in this index have been reported. This would be like claiming a football game is over when one team is up by 3 points heading into the 4th quarter. The May reading was just revised up by 2 basis points to -3 basis points, so it’s obvious the June index can be revised to show a positive reading.

Even more reason to delay making prognostications before the data is in and revised can be seen in April’s reading. April’s revision was terrible as it went from -0.48 to -0.73 which is the worst reading of the year. When the 3 month moving average is below -0.7, it signals the economy is in a recession. Luckily, the past couple months haven’t been terrible as the 3 month moving average is -0.26. The 3 month average will likely increase next month as April’s reading won’t be included. In June, the employment section was up 6 basis points; production was flat; the orders and inventories index was down 3 basis points; and personal consumption and housing was down 5 basis points. Any negative reading is below average growth in standard deviation units.

The slide below shows a great summary of the latest statements from central bankers and where Q2 GDP growth will likely end up.

The July decision is next Wednesday and the Q2 initial GDP report is this Friday. Finally, the Fed is done talking because the blackout period has begun. The colored arrows show the confusion the latest speeches created. There were 3 neutral statements, 2 hawkish statements, and 4 dovish statements.

There’s nothing wrong with disagreement at the Fed. There doesn’t need to be a united front on policy. However, members shouldn’t move the Fed funds futures market wildly right before the meeting. The dot plot labels help you contextualize each member’s statement, but Fed members don’t always stay dovish/hawkish. Bullard is considered a dove by most investors, but he walked back Clarida and Williams’ speeches last week.

After all that misdirection by various Fed members, we are left with the Fed very likely to cut rates once. There is a 100% chance of a rate cut and a 78.6% chance it is one cut. 2 cuts are not on the table. The table below reviews potential language for each potential policy decision.

We must key in on the middle 3 columns because the Fed will cut rates once. The Fed will have an uncertain outlook if it goes with a dovish cut. If it’s neutral, it will be upbeat about the current economy, but have an uncertain outlook. Finally, a hawkish cut, which could send stocks lower, would be upbeat and downplay outlook risks. Fed watchers have the language down to a science. Each phrase means something specific unlike normal conversation when someone might not assign a difference to ‘modest’ versus ‘moderate’ for example.

The 2020 Election Starts To Matter

Even though there are still 20 candidates set to square off in the second set of Democratic presidential primary debates, the election might soon impact the stock market besides just the healthcare sector. As you can see from the chart below, from the summer in the year before the election to the end of that year, on average the S&P 500 is choppy with no trend.

As the number of candidates drops in the coming months, it will be interesting to see which top candidate picks up the most support.

Looking to the general election, the current economic backdrop favors the incumbent which is Trump. However, even though consumers are very confident, Biden leads Trump by 8.5% in the average of recent polls. As you can see in the charts below, the ISM manufacturing PMI and payrolls growth help forecast elections.

Manufacturing might rebound next year as it seems to be already showing signs of improvement. Manufacturing is a small part of the economy, but it can be pivotal in swing states such as Pennsylvania and Michigan. Payrolls growth might be weak in 2020 because of how full the labor market is. However, a full labor market is great news for Trump even if payrolls growth is low.

The Chicago Fed national activity index has been very close to positive in the past 2 months, so saying it signals a recession is coming, misconstrues the data. The Fed is set to cut rates 25 basis points. The only question is if it is a dovish, hawkish, or neutral cut. Q2 GDP growth should be from 1.6% to 2.2%. The consumer will drive growth unlike in Q1. The 2020 election is affecting stocks now and will increasingly affect them as it gets closer. We should know who the Democratic nominee is by May.