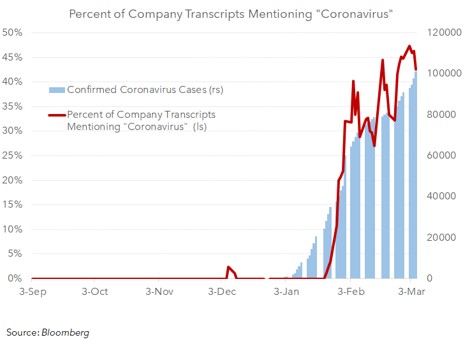 Markets are more liquid than ever, in terms of trading volume, and information flows freer and quicker than ever. This economic expansion has been modest, but consistent. That’s what makes the chart below so shocking.

Mandelbrot would be having a field day with these markets because his research showed markets are much more volatile than what is implied by the normal distribution curve. It’s worth mentioning that the old adage that young investors haven’t see volatility and panics just because they haven’t seen the S&P 500 decline more than 20% is untrue. This hasn’t been an easy market to trade because shocks have come out of nowhere. Secondly, there’s no evidence that if you traded a down market you suddenly become good at making money in bear markets. This isn’t to say that the current environment is anywhere near the 2008 financial crisis. Even if the stock market fell 50%, this wouldn’t be as bad as the financial crisis. That being said, if stocks did fall that much, there would probably be a major undiscovered issue. The point is there is currently no fear of bank failures and the consumer’s largest asset isn’t seeing a sharp decline in value.

The Atlanta Fed Nowcast shows Q1 GDP growth is on pace to be 3.1%. We recently got a great jobs report which showed 273,000 jobs were created in February. We have done enough explaining about how solidly the economy was doing before the coronavirus hurt it. Now we must face the music and see how bad the economic data in March ends up. We will be watching the jobless claims report as well as the Tuesday small business confidence report. Since we don’t have much actual March data, we turn to alternative data.

As you can see in the top chart below, domestic movie box office receipts had been mostly below average (2017-2019) this year, but the drawdown has enlarged in the past 2 weeks.

We know that in the last 2 days of the University of Michigan consumer sentiment report, 20% of consumers mentioned the coronavirus without being prompted. The media has been running story after story on how bad the situation is which probably makes people want to visit the movies less and eat out less.

The bottom chart above shows Broadway box office receipts. They haven’t fallen below average, but there are 4 days less data in this chart. There were hardly any cases of coronavirus reported in New York by March 1st. We think the coronavirus will hurt cities the hardest because they have heavy use of public transportation and there are more people in public meeting places.

The media is mentioning the coronavirus much more than SARS, the swine flu, or Zika. We showed the chart comparing the number of coronavirus stories to the highest of the 3 which is the swine flu. It still was mentioned less half the time as the coronavirus. The timing is different as in 2009 the economy was just exiting the financial crisis. The swine flu infected upwards of 61 million people in America and killed 12,469 Americans. It killed 575,400 people globally. We aren’t doctors. We aren’t saying the media shouldn’t cover the disease and we aren’t saying it will or won’t be worse than any of the ones we mentioned. We are saying that the economic impact will be greater than any of the others because of the number of media stories. South by Southwest was canceled. That event pumps $356 million into the Austin economy.

As you can see from the chart below, the percentage of firms mentioning the coronavirus on their conference calls has exploded just like the number of cases. Over 40% of firms mentioned it. That’s why the base case scenario is 0% earnings growth. However, by the time these firms report all the damage, their stocks probably will have bottomed.

The Chinese economic data is just starting to show the ramifications of its economy shutting down for weeks to deal with the virus. As we mentioned, when the data starts to show weakness, it’s usually already priced in. As you can see from the chart below, the Chinese stock market is up 19% year to date and increased from 8% of the global stock market to 10% since it bottomed in early February.

If you value stocks based on forward earnings, they weren’t cheap (as of Friday). As you can see from the chart below, the best PE ratio was 17.5 which is above the previous bottoms after corrections.

We aren’t going to see multiple expansion this year because stocks came into the year expensive. If earnings growth is zero, there’s not much room for stocks to have a positive year. On the positive side, this earnings weakness does little to intrinsic value. If the coronavirus slows down and doesn’t come back in the fall, stocks will probably anticipate a better 2021 starting in the 2nd half of this year.

Stock market shocks are becoming more common. The 6 day correction off the peak might be the new normal. Fewer people are going to the movies because of the coronavirus. Even if the virus isn’t as bad as some of the prior viruses, it will have a massive economic impact because the Chinese economy shut down for about a month and the U.S. media is running endless stories about it. 40% of firms mentioned it on their conference calls. The Chinese stock market is rallying because the worst is likely over there. The S&P 500 was still not cheap despite the 12% correction.