Small Traders Are Euphoric Beyond Anything Before 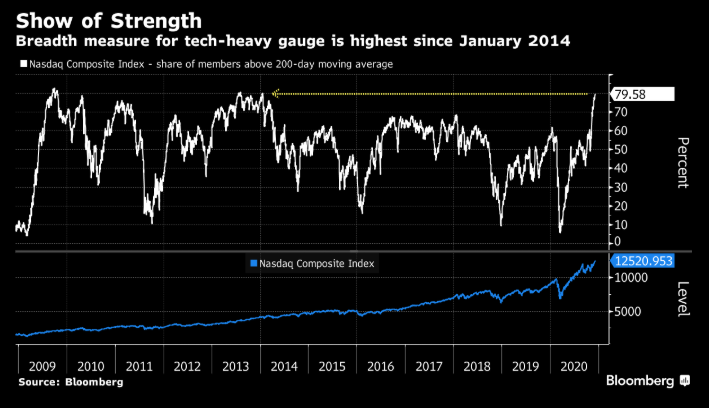 The amazing thing about this new crop of retail traders who are largely millennials is they never go away. They always come back for more. It doesn’t matter how much a stock falls or how much they lose on options, they come back like gambling addicts to a casino. As you can see from the chart below, small trader call buying is 22% of all opening volume which is a new record high. Speculation is higher than in the late 1990s because access to options trading has increased. Furthermore, we have social media and smartphones which make it easier to find ideas and execute trades. Just because it’s easy to make a move doesn’t mean you should do it. Overtrading can be a big problem. Have some mental stops that prevent you from going all in without proper due diligence.

The stock market is based on corporate profits, but speculation can turn any asset into a gamble temporarily. If a company trades at a triple digit PE ratio, it’s not really a bet on the business anymore. It’s a bet on a game changing innovation which scales. In that sense, you can invest like a venture capitalist in a large cap company if there is enough optimism baked into the share price.

Speculation mean reverts hard. As optimistic as investors are now, they will be pessimistic when the speculation cycle ends. It’s tough to figure out when the cycle will turn because it’s irrational to begin with. Potential catalysts are weakness in tech stocks due to the economic reopening in 2021, an increase in the supply of stocks, and rising rates. Supply comes to markets that demand it. Every tech company that ever considered going public is doing so now that the market is favorable to them. The market keeps dropping its standards and supply keeps coming via SPACs as well as dilution through secondaries and stock-based compensation.

The stock market is overbought as the CNN fear and greed index is at 88 out of 100 which is extreme greed. As you can see from the chart below, 79.58% of Nasdaq stocks are above their 200 day moving averages. That’s the highest percentage since January 2014. The Nasdaq 100 is on an 11 day winning streak. It never had one in the 1990s tech bubble. The record is 14 days. It’s possible the increased prevalence of passive investing is playing a role in these streaks. Individual active managers probably get more skittish when they see long winning streaks.

A Systemic Issue With Passive Investing?

Tesla’s rally could be poking a hole in the passive strategy. Passive investors in the S&P 500 index are about to put money in the stock while active traders are getting in ahead of the game by buying in anticipation of the move on December 21st. Tesla is up 57.3% since November 16th. In theory, it would be quite rare for a stock to rise to inclusion without much of a business. However, if active managers all know a stock will be purchased without analysis, game theory shows active managers can rig the system against passive players. If you know your opponent is never going to change their action, the rules change. Passive investing becomes unsustainable. Tesla will be less than 2% of the index, but who is to say this will be the last such stock to be added in this manner? Active speculators can force index buyers to purchase whatever active investors want. This is a dangerous game that can threaten the passive strategy.

Value has actually beaten growth for four straight weeks which is the longest streak since November 2018. When we talk about value losing to growth and quality, this isn’t something that can get resolved in a few weeks even if value had its best month ever in November. This is a trend change that could last years.

As you can see from the chart below, the Russell 3000 growth versus the Russell 3000 value hit a 1.78 standard deviation which is significantly higher than the peak in 2000. It took a couple years and massive losses in tech to reverse course. If value actually becomes overbought versus growth in this cycle, value will be beat growth for many years.

Most of the shift could be catalyzed by a decline in speculative tech stocks rather than a rally in value. We just had the best month for value ever. That’s not sustainable. Energy is the most beaten down of the value stocks. As you can see from the chart below, energy has had its worst decline in 90 years because fracking firms have been cash burning machines.

Shale oil and gas burned cash every year since 2010, burning $342 billion in the process. Shale creates more oil and gas supply which ruins the market for all drillers. This year was made worse by the pandemic as demand went away, creating a big glut. The good news for oil is small firms have gone bust, big firms have cut projects, and banks won’t give out energy loans. Demand for fossil fuels will increase as the economy reopens. Energy could rebound in 2021.

Small traders are speculating because it’s easy and because markets are doing well. They haven’t learned their lesson yet. Few investors remember the crash in 2000. The Nasdaq’s breadth signals the market is overbought. Active traders are taking advantage of passive investors. Value is going to beat growth for years, not a few weeks. Shale oil has burned cash every year for a decade. That’s why it is so hated. Every market narrative starts with a kernel of truth. The problem is if you used this cash burn data as support for avoiding energy, you would have missed massive gains in the fall. The OIH energy services index is up 74% since October 28th.