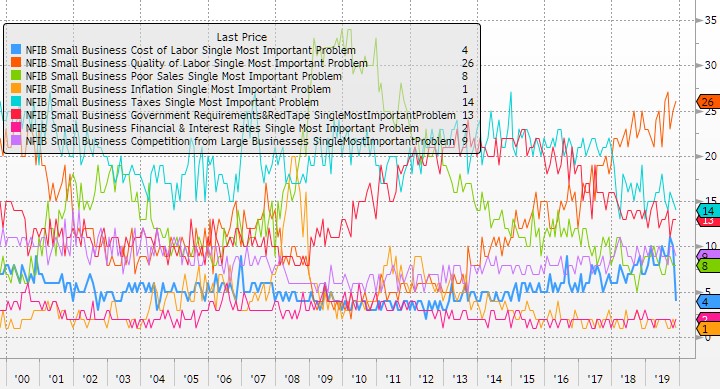 Weak CEO/CFO confidence is fodder for bearish investors, but it always seemed suspect. You can see it bottomed near the end of the last recession. You would have to ignore the data to believe the economy is already in a recession.

This small business confidence report differs dramatically from the weakness shown in the ADP report. It’s fair to discount the November ADP report because it was way off from the BLS report. So much for declining margins making the labor market weaker. This brings us to the segment with the biggest improvement in the NFIB survey. The earnings trends segment increased a remarkable 10 points to 2%. The net percentage with improved earnings in the past 3 months versus the prior 3 months was 2%. That sounds terrible, but it’s actually the 2nd best reading ever (since 1986). The best was 3% in May 2018.

The labor market is tight as many small firms are looking for jobs and can’t fill them. Compensation plans hit a cycle high. Specifically, the net percentage of small firms with job openings that they’re not able to fill increased 4 points to 38%. That’s 1 point below the record high which was hit this March. The bottom chart below shows the job openings index and the average change in employment per firm.

The chart below shows the historical changes in the single most important problem listed by small businesses.

The ECRI leading index, which predicted the current economic slowdown, is now forecasting modest improvement in mid-2020. It’s obviously debatable if this is even a slowdown based on the recent strength in consumer and small business confidence. The yearly growth rate in the October ECRI coincident index was 1.7% which is near the 0.9% growth trough in May 2016. There’s certainly weakness in industrial production growth and the Cass Freight index, but Q3 and Q4 GDP growth might not end up being that bad.

We will discuss the Q4 GDP Nowcasts next. Firstly, as you can see in the chart below, the ECRI leading index’s growth rate increased from 1.7% to 2.4% in the week of November 29th. Its comp is very easy as the index troughed in December 2018. This was still a good reading though as the index increased 1 point to 147.8. The record high was 152.7 in February 2018.

Despite the market getting ahead of itself by looking at the potential growth acceleration in 2020, we’re still in Q4 2019 which means we must look at Q4 GDP growth. Keep in mind, the final Q3 reading isn’t even out yet. The latest update of the Atlanta Fed GDP Nowcast has Q4 growth coming in at 2% (up from 1.5%). On December 6th, the estimates for real PCE growth and real gross private domestic investment growth rose from 2% and -2.8% to 2.3% and -0.8%. The consumer will drive GDP growth, while businesses will pull back on investments.

The usually bullish St. Louis Fed Nowcast sees 1.91% growth. Keep in mind, the median estimate is for 1.8% growth. The usually bearish NY Fed Nowcast was the most negative as it sees just 0.58% growth. In its December 6th update, it fell 19 basis points primarily because of the ISM manufacturing report. The great labor market report only helped it by 9 basis points. The first estimate for Q1 GDP growth was 0.98%. That was lowered to 0.66% mainly because of the ISM manufacturing report. The stock market, which has priced in accelerated expansion in 2020, would be shocked by such weak Q1 GDP growth.

Small businesses were wildly optimistic in November as the net percentage experiencing improvements in earnings rose 10 points from October. There is a tight labor market which is causing compensation plans to increase. There are a lot of job openings that aren’t being filled.  The ECRI leading index’s yearly growth rate has been improving. The median estimate for Q4 GDP growth is 1.8%. The NY Fed sees below 1% growth in Q4 and Q1 2020.