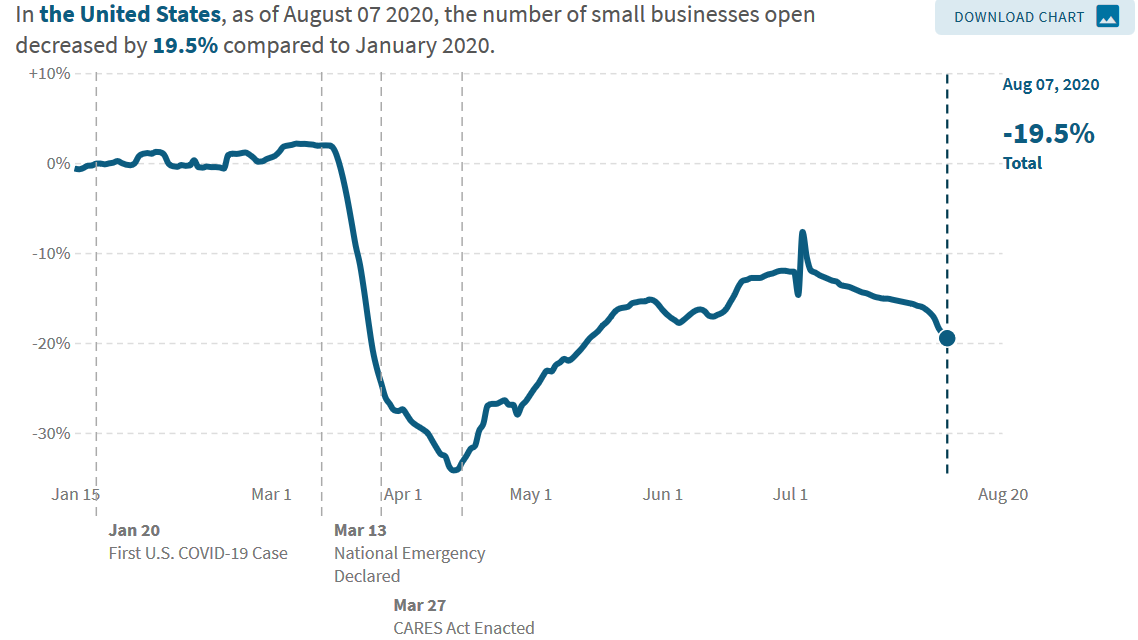 Initial jobless claims in the week of August 15th rose from 971,000 to 1.016 million on a seasonally adjusted basis. The main question is if this is a new trend or a one time blip. In a normal economy, we would never even consider the idea that the economy was shifting based on one week’s report unless there was a reason to. In this case, we have a good reason to.

The economy might be slowing because less people are getting federal unemployment aid and those who are getting aid are getting half or 2/3rds of what they were getting last month. Texas just announced that its residents will be getting $300 from the federal government per week, making it the first major state to do so. This jobless claims report is consistent with the lack of any improvement in job postings. We are seeing a plateauing in Europe’s economy as well. More stimulus is likely needed or else this can turn ugly.

On the positive side, initial claims fell extremely sharply last week, so maybe this is give back. As the chart above shows, the trend line is intact. Initial claims would have gotten back to normal in a few weeks if that decline would have continued at the same rate. We saw a 2 week increase in initial claims in the July slowdown due to the spike in COVID-19 cases. New cases are now falling rapidly and new deaths are falling slowly.

Anyone who thought people were going to get a job when the federal money was taken away were wrong as initial claims were up unfortunately. This report had broad based weakness which suggests it wasn’t a one-off blip. 36 states had increases which was the most since March 26th. The peak was 35 in July. It’s no surprise the weakness is broader now because in July the spike was related to COVID-19 cases spiking in specific hot spots. Now we have general weakness.

This weakness had nothing to do with seasonality. Non-seasonally adjusted claims rose from 839,000 to 892,000. Here’s a shocking stat. This was the first increase in unadjusted claims in the 33rd week of the year since claims started being measured in 1967. This supports the overarching point we’ve been making which is seasonal factors are very mild compared to the shifts in the economy which are massive as this was by far the biggest spike in jobless claims ever. Pandemic unemployment assistance claims were up 53,000 to 543,000. If you combine PUAs, which can’t be adjusted because this is a new program, and unadjusted initial claims, they rose 8% weekly after falling 22% and 18%. That makes it look like a blip up after 2 big declines.

Continuing claims in the week of August 8th fell from 15.48 million to 14.844 million which makes sense because last week had a large drop in initial claims. It’s unfortunate that the increase in initial claims came in the BLS survey week. Next week’s continuing claims reading will be in the survey week. As you can see from the chart above, there has been an increasing amount of pandemic emergency unemployment claims. There are about 1.3 million of them which is up from about 800,000 in mid-June.

The 3 week average decline in continuing claims is 702,000. If that decline continues, it will take almost 12 weeks to just get back to the 6.6 million peak in the last recession. You can think of the entire recovery since the recession ended this spring as the pre-game. We haven’t even gotten to the starting line which is why a slowdown would be catastrophic. It would be terrible be for unemployed people to wait another 12 weeks to get a job.

To have a sustained recovery, we need small businesses to get help, a decline in COVID-19 cases, and extra money given to consumers. What we don’t need is a bubble in technology stocks. Some people are saying all this household wealth can help the economy. That won’t be the case if the Nasdaq has a large correction. It’s a very bad sign if people need to gamble in expensive stocks to stretch their stimulus check. Unfortunately, a bubble burst would add a negative catalyst to an economy that doesn’t need one.

As we mentioned, job posting growth has been stuck. As you can see from the chart above, job postings have been stagnant in August. The chart adds the data from 5 midwestern states which show similar weakness. This weakness is likely stemming from small businesses which can’t handle the decline in sales and uncertainty that COVID-19 brings. There still is a different more restrictive way of doing business even though cases are declining. The 7 day average of new cases fell from 64,189 on August 1st to 46,589 on August 20th. As you can see from the chart below, in the week of August 15th, 10.9% of small businesses said they decreased the number of paid employees they had. Only 6.7% increased their paid employees.

As you can see from the chart below, small firms are lucky if they’re just cutting paid employees. As of August 7th, 19.5% fewer small businesses were open compared to before the pandemic. There has been a decline in the percentage that are open since July. The decline accelerated in August even though new cases started dropping rapidly.

Jobless claims increased and job postings have stopped increasing. This spells trouble for the economy. The labor report will be weaker in August than July. The only good news about a weak report is it might spur Congress to act. In that case, a shockingly weak report would be a good thing especially if it ends up being adjusted higher in later months. There should be no need to shock Congress into acting because small businesses are cutting employees and closing. If we enter a new economy where there are much fewer small businesses and large technology companies control the world, there will be political upheaval. It will be much worse than any of the income inequality protests of the past few years.