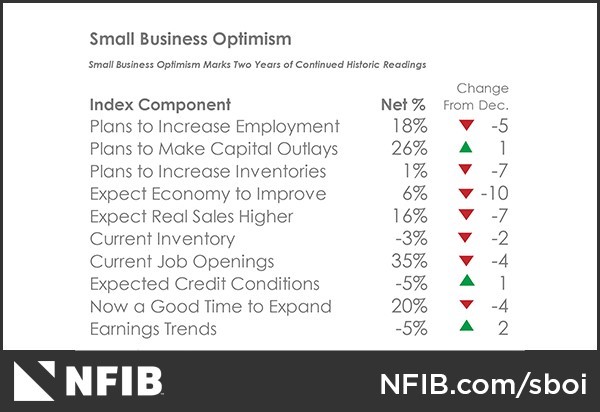 According to The Earnings Scout, as of February 14th, Q1 and Q2 earnings estimates call for 0.85% and 2.54% growth. That’s down sharply from the start of the year where estimates when for 5.54% and 5% growth. As you can see from the chart below, earnings estimates have cratered while stocks have soared.

89.8% of S&P 500 stocks are above their 50 day moving average which is 4.4% away from the highest level of this expansion (2016) and the highest level since at least 2003. This scenario is similar to that peak in 2016 because stocks were rebounding after a recession scare. A dovish global central bank shift in 2016 helped allay recession fears. This time we had the Fed shift dovish in late December.

Looking at this pessimistically, this scenario is also similar to the period leading up to 2000 and 2008 because the slope of earnings estimates has been negative for 2 years while stocks are near their record highs.

These earnings recessions not in economic recessions occurred during slowdowns. There have been more mid-cycle slowdowns lately because expansions have gotten longer. We aren’t sure if the propensity for longer cycles is a trend or a coincidence because there’s not much data to work with. The two longest expansions, which are the 1990s one and the current one, skew the post-WWII average higher.

It’s possible globalization has played a role in the decoupling of earnings growth and the economy. From 1948 to 1984 there was only one earnings recession without an economic recession.

Tech stocks have pushed up the S&P 500’s reliance on the global economy as now 37% of the index’s revenues come from international markets. Since international earnings are catalyzing the 2019 weakness, this is a candidate for another earnings recession without an economic recession.

It’s notable that tough comparisons are driving this potential earnings recession as estimates for Q4 2019 call for 11.29% growth because Q4 has much easier comps. If revenues end up growing in the mid-single digits during this earnings recession like they are expected to, we can call this a phony recession. Contrary to what some believe, the economic weakness in Europe, which is hurting S&P 500 earnings, doesn’t mean US growth will be bad. As you can see from the chart below, US GDP grew during the 2012 European recession and its trend growth has been double Europe’s growth since the great financial crisis.

The headlines on the January small business confidence index are horrid as the index fell for the 5th straight month for the first time since 1998. It was down from 104.4 to 101.2 which missed the consensus of 103 and the low end of the estimate range which was 102. The 3.2 point drop was the largest decline since July 2015; it is the weakest reading since December 2016. This is still a good reading, but it’s terrible in rate of change terms as sentiment was great last year.

The headline results take this index literally, without recognizing why it fell. The decline was caused by weakening economic expectations, just like the consumer sentiment report. Consumers and small businesses were worried about the 20% stock market decline, the trade war, the 35 day record long government shutdown, and the global economic weakness. The volatility and government shutdown were temporary issues.

Consumers’ and small business’ economic projections don’t mean much because they often express optimism right before recessions. We’d rather know how their individual finances and businesses are doing. As you can see from the table below, the expectations for the economy to improve were down 10 points while plans to make capital outlays were up 1 point.

We already know about all the worries about the economy because they are in every headline. Even with these worries, small businesses are still going to make investments. This is positive and signals the economy isn’t headed for a recession.

Fund managers are very bearish as they weren’t buying into this rally as of the February Merrill Lynch fund manager survey. As you can see from the chart below, the net percentage of fund managers that said they were overweight cash was the highest since January 2009.

That was the end of the 2007-2009 bear market, so that’s not a bad situation to be compared with. We are at a 10 year high in profit and macroeconomic pessimism, a 2.5 year high in bond allocation, and a 16 year high in dollar overvaluation.

The percentage of fund managers who want firms to return cash to shareholders hit a record low and the percentage who want firms to improve their balance sheets hit a 10 year high. 55% of fund managers are bearish on growth and inflation which is a 13 point increase from last month. Long emerging markets was called the most crowded trade, but only 18% said this. 17% said long the U.S. dollar was the most crowded trade.

As you can see from the chart below, fund managers have the smallest overweight global equity allocation since September 2016.

That was right before the November election which catalyzed a spike in stocks. American economic growth had already been improving prior to that.

It’s remarkable to see fund managers extremely bearish while stocks rally. Even though stocks are overbought, they can still rally higher if economic growth improves enough to change fund managers’ minds. To be clear, the S&P 500’s earnings recession might be overblown because revenues are expected to grow in the mid-single digits in Q1 2019 and earnings are dealing with extremely tough comparisons. Even though the economic weakness in Europe and China supports the negative narrative, bearish investors should be worried that a high percentage of fund managers are on their side. That doesn’t provide much upside for the short trade as bear markets are built on euphoria, not skepticism.