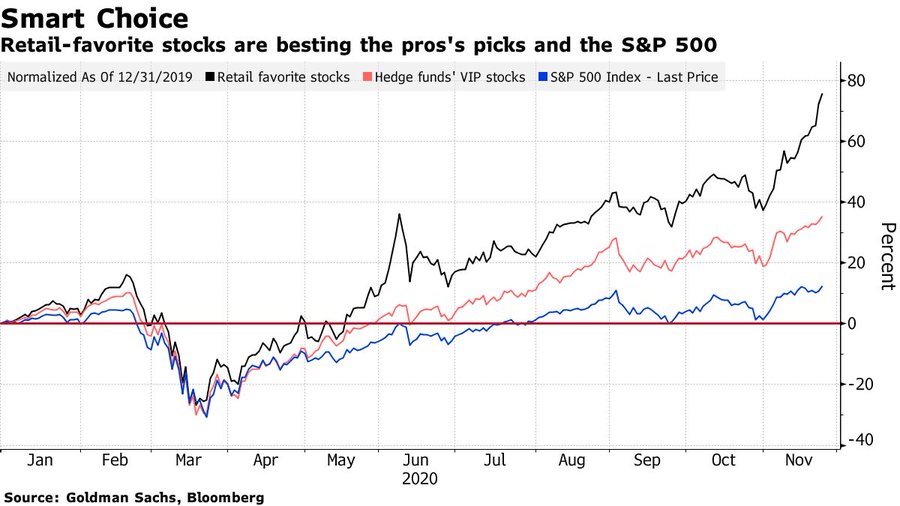 There are a lot of storylines this year in markets. One of the most interesting is how well retail traders with no experience have done. As you can see from the chart below, retail favorites are crushing the market and even hedge fund VIP stocks which have outperformed the market themselves. Crazy risky stock ideas which normally do horribly have made new traders a ton of money. It’s like the used car commercials that try to show anyone can buy one. They say, you can buy one with bad credit or no credit because everyone gets approved. In this market, profits (made by firms) are optional if not discouraged. Even bankrupt stocks have had their day.

Low interest rates are not a justification for wild speculation. They provide the ground for extreme movements, but they don’t last. One of the more recent examples was marijuana stocks. This isn’t a new normal where speculation stays this way. There has always been wild speculation, but it never lasts. The main difference between now and the past is how easy it is to risk your life savings. You can tap your phone screen while in bed. As you can see from the chart below, bicycle stocks exploded in the late 1890s. Speculative crazes occur with each new generation. We are just in the latest one.

Because of the Thanksgiving holiday, jobless claims came out a day early. They ruined the holiday joy because they were bad. This is the 2nd week of rising claims which could signal the labor market is getting worse because of COVID-19. This probably won’t be a double dip recession, but the slowdown thesis is real.

Last week’s seasonally adjusted initial claims were revised up 6,000 to 748,000. Initial claims in the week of November 21st rose to 778,000 which was above the consensus of 730,000 and only 2,000 below the highest estimate. Judging by the spike in COVID-19 cases and economic restrictions, it seems like this is just the beginning of the increase in claims. Traders are looking past this weakness because the hope is vaccines will reopen the economy this spring.

As you can see from the chart above, non-seasonally adjusted initial claims and PUAs were up 7%. That’s the 2nd week in a row they rose. There was a 4 week streak late in the summer. This run of weakness should be worse because the COVID-19 crisis is worse and government support is about to be non-existent. Late in the summer there at least was $300 in additional weekly pandemic unemployment benefits. Now there is a chance all the pandemic benefits will expire on December 26th.

Non-seasonally adjusted initial jobless claims rose from 749,000 to 828,000 which was the highest since October 10th. PUAs fell 8,000 to 312,000. At one point in September, there were more PUAs than regular claims. PUAs are full of fraud which is why we’d much rather see regular claims fall in the short term. PUAs are less sensitive to cyclical changes and more sensitive to fraud being caught and errors being adjusted for.

Seasonally adjusted continued claims fell from 6.37 million to 6.071 million in the week of November 14th. That 299,000 decline was the lowest decline since September 12th, but it’s still a solid decline. If continued claims were to fall at this rate for another 10 weeks, they would be back to normal excluding pandemic assistance. However, they won’t fall at this rate because there will be progressively less room to fall, the labor market is worsening as evidenced by the rise in initial claims, and fewer people are lapping out of benefits.

The 6 months of benefits expiring is the driving force of the declines this fall. 6 months from December was June which didn’t have nearly as many initial claims as May. Therefore, continued claims will fall less next month. The good news is they should normalize in Q2 of next year if the vaccines are effective.

As of November 7th, 13.7 million people were on benefits that will expire on December 26th if the government doesn’t extend them. It’s hard to imagine politicians allowing their constituents to take that much of a hit. Unfortunately, there is a lot of dysfunction in Congress. The two Georgia Senates races will determine the balance of power in the Senate. The GOP needs to win one to control the Senate. Some members of Congress believe the economy is recovering well, so more help isn’t needed. However, it’s recovering this well because of the government’s support. Without that help, it would be a lot worse. Furthermore, COVID-19 is slowing/reversing the recovery. It makes so much sense to help people for the next 2-3 months before the vaccines fully go out.

In the week of November 7th, there were 4.5 million PEUCs and 9.1 million PUAs. There were also 600,000 people on extended benefits. The total number of people on all benefits programs actually rose from 20.32 million to 20.45 million. That’s an unusual increase that goes along with the thesis that the labor market is worsening.

The good news is COVID-19 case growth is slowing and the positive rate is falling. Economic restrictions aren’t going to immediately go away after cases peak though. We might even see them stay until the year ends. If COVID-19 abates, the slowdown period (before the vaccines) from the 2nd half of November through the end of February won’t be as bad which means it will be easier to recover from.

Retail ruled the market in 2020. The most recent unemployment claims report was bad, but investors are ignoring bad economic data because they see the vaccines reopening the economy and spurring growth. COVID-19 case growth is slowing which could limit the size and scope of this slowdown.