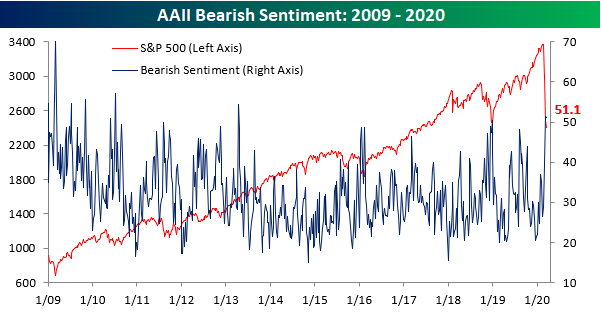 Don’t let the stabilization in stocks on Thursday fool you into thinking the worst is over in the economy. The worst is just beginning. There is about to be a tsunami of layoffs. Bank of America predicts there will be 3.5 million layoffs this year. There will be 500,000 in March and 1 million per month in Q2. The unemployment rate is expected to spike to 6.3%. They also see -12% GDP growth in Q2. The number of job losses contextualizes the hardship that corresponds with the huge contraction in the economy coming in the spring and summer.

COVID-19 is already causing disastrous outcomes and the shutdowns are still not complete. California just gave a ruling to its nearly 40 million citizens to shelter in place. Furthermore, in Pennsylvania non-life sustaining businesses must close by 8PM. Many beaches in Florida are being closed which eliminates the economic boom that is spring break.

Survey USA did a poll on COVID-19’s impact on the labor market. In a survey of 1,000 adults on March 18th and 19th, 56% said they don’t continue to go to their place of employment (of the 593 who usually work outside home). 9% of workers who work outside of home have been laid off because of the virus and 2% have completely lost their job. This is only the beginning of the negative repercussions of the draconian measures taken to slow the spread of the virus. We will see how well they are working in the next few weeks.

Everyone was anticipating the Thursday jobless claims report from the week of March 14th, but it was largely a dud because the weakness only started at the tail end of that week. The real weakness will be seen in the next report. Specifically, initial claims rose from 211,000 to 281,000. That’s not a recessionary figure (although the 70,000 increase was the highest weekly change since November 2012). However, the next report will be recessionary. It will be an utter disaster. It will be the worst jobless claims report ever. That sounds like a prediction, but it’s almost complete certainty now. It’s certainty because there will be the most jobless claims in a week by far. This is like when a candidate wins a race in a landslide allowing the media to call the race as soon as polls close based solely on exit polls.

We will do the exact math on the number of claims as a percentage of the labor market after the report comes out, but in nominal terms, claims will be at a record high. Claims rose from 58,208 to 190,000 in California. They rose from 7,051 to 78,000 in Ohio. According to Goldman Sachs, claims will rise to 2.25 million which was unthinkable just a month ago. Claims will be slightly under 1 million based on the partial results from 15 states. They will be slightly below 900,000 based on Google trends data. They will be above 1.3 million based on the Ohio filings reported by the media.

Jobless claims and the stock market have such a tight (inverse) correlation that many prognosticators say that you should just follow claims and ignore the rest of the data. Unfortunately, we didn’t know about this coming spike in claims on February 19th when stocks topped. You needed to predict the spike in claims as there was no evidence it was coming based on the recent data. The fact that claims are set to have a record setting increase is perfectly in line with the record setting decline in stocks in March.

Many states are in a terrible position to deal with the coming onset of claims even though we just exited an 11 year expansion. As you can see from the chart below, California only has 0.21 years of state unemployment benefits in reserves.

The biggest states, California, Texas, New York, Ohio, and Illinois have very little money to deal with the spike in unemployment. The only big state in relatively okay shape is Florida. Obviously, the cost of dealing with COVID-19 makes matters much worse.

The good news is investors are bearish. The NAAIM exposure index fell from 87.91 on February 19th to 10.65 on March 18th. The 3rd quartile of investors went from having a 100% positive exposure to a 25% positive exposure in that period. In the week of March 18th, the number of bears fell and the number of bulls rose. The good news is the percentage of bears was 51.1% which makes this the 1st back to back weeks of above 50% bears since March 2009. As the chart below shows, the bears fell 0.2% to 51.1% which is above the average of 30.5%.

We know a few funds blew up on Thursday because there was extreme selling pressure in places you wouldn’t expect. The VTEB Vanguard National Muni ETF is down 18% since March 9th and has a discount to its net asset value. The premium munis yielded over treasuries was higher than the peak during the financial crisis. Cities such as New York and Los Angeles are in a financial hole. The TLT, which is the long bond, and the Vanguard short term investment grade corporate bond ETF traded at a 4% and 5% discounts to their net asset value. The NEAR short maturity bond ETF fell 6.25%. That ETF hardly moves most of the time. As you can see from the chart below, the LQD investment grade corporate bond fund has had a bigger decline than it did during the financial crisis.

Stocks were relatively stable on Thursday, but make no mistake about it, the labor market is like the Titanic headed for an iceberg. Technically, it has already hit the iceberg, but it’s not reflected in the data yet because this week’s jobless claims report comes out on Thursday the 26th and the BLS monthly report comes out in a couple of weeks. The good news is there are plenty of bears, which means there are plenty of investors who can turn bullish. Thursday was a very unusual day in the bond market as there was a lot of forced selling.