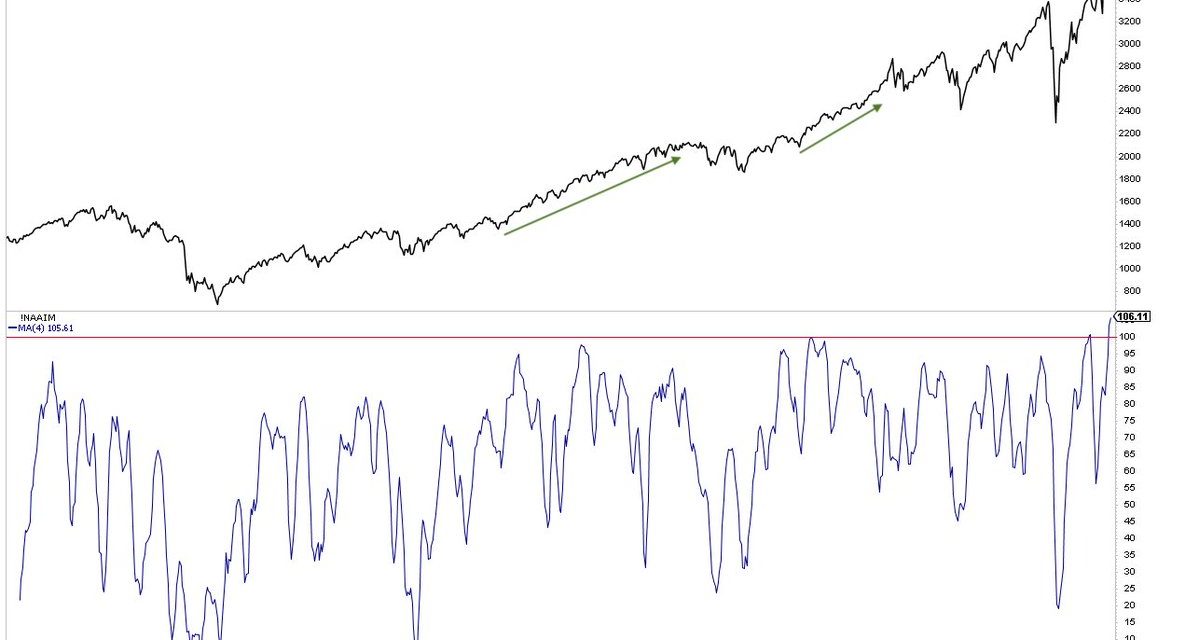 The stock market is at its most overhyped phase since the late 1990s tech bubble. Think back to how wrong the people were who claimed we were in an ‘everything bubble’ for the entirety of the record breaking expansion in the 2010s. Now that you see the SPACs and IPO pops this year, you realize we weren’t in a bubble from 2010 to 2019. Those years set the scene for this craze, but they weren’t crazy in themselves. Here are some stats to back that up.

Both retail traders and fund managers are all in on this market. The only difference is retail traders are doing better. As you can see from the chart above, the NAAIM fund manager exposure index is at 106 again. It has been above that level in 3 of the past 4 weeks. It has been above 100 for 4 weeks which is why the 4 week average is at a new record high. This data only goes back to 2007, but it’s still impressive. It means the average manager is the most leveraged long it has ever been. It would have been fun to see this data in the 1990s.

Retail traders have mostly had a great year. As you can see from the chart above, retail favorites are up 81.5% year to date. Remember, we need more retail traders to join in this bubble and we need fund managers to get more leveraged long the riskiest stocks to keep the rally going. That’s because there will be an onslaught of supply via secondaries, IPOs, and SPACs in the coming months. Investment banks and money losing growth firms are taking advantage of the speculation to make money. Supply will meet demand.

The tech darlings crashed in the early 2000s. We like to mention the companies by name because it becomes easier to understand that history does repeat/rhyme, for those who didn’t live through that cycle. It helps you compare the current stocks to the hot ones of the past. Furthermore, it’s entertaining and informative to hear what speculators were saying at the time. The problem people have with hearing uber bullish quotes is that they have been hearing them for years. Just because people are excited about stocks doesn’t mean it’s a bubble. Reddit was popular for sharing ideas in 2019, yet there wasn’t a bubble. The fact that people are complacent about speculation supports the idea that we are in a bubble, but quotes alone don’t mean anything.

The early 2000s was a disastrous time for the hottest tech stocks. As you can see from the chart above, leading up to the bubble peak, the top 10 darlings had an average PE ratio of 90. That was over triple the bloated S&P 500 PE ratio of 27. That was on peak earnings. High PE ratios are fine after recessions, but not at the end of expansions. The S&P 500 returned -32% from the end of February 2000 to the end of 2002. The average stock in this list returned -71% with Nortel going bankrupt. HP crashed 65% even though it had a 15.6 PE ratio. It was still a hot stock before the bust as it rose 200% in the 2 years leading up to the peak. The current darlings are the tech firms that benefited from the one time event that was the shutdown and the electric vehicle stocks.

The decline in initial jobless claims last week was because of Thanksgiving as we mentioned at the time. It was an easy call because economic restrictions are increasing and people are becoming more hesitant to leave the house. In the week of December 5th, seasonally adjusted initial jobless claims rose from 712,000 to 853,000 which was above estimates for 724,000 and the highest estimate which was 800,000. That’s the biggest increase since March 28th which was the biggest increase of the recession.

Non-seasonally adjusted initial claims rose from 719,000 to 948,000 which is the highest level since August 1st. Claims probably won’t increase that much next week. This is backed up data from the previous week. However, even if claims fall slightly next week, they will be higher than 2 weeks ago.

PUA claims rose 139,000 to 428,000. This caused the total of PUAs plus unadjusted claims to rise 37%. As you can see from the chart below, that’s the biggest increase in months. The PUA data isn’t reliable though. In Nevada, PUAs rose 53,000 which was a 6x increase. Even without that increase, this was the largest number of PUAs since September. Cleary, the labor market is getting worse even if the PUA data isn’t perfect. There are 13 million PUAs plus PUECs that will expire on December 26th if a deal isn’t made in Congress.

Even though continued claims data is from the week of Thanksgiving, claims rose from 5.527 million to 5.757 million. They will probably rise next week since there was a big spike in initial claims. This was the first increase since August 29th. In the week of November 21st, the total people on all benefits fell from 20.2 million to 19 million. This sounds good, but that’s before weakness picked up.

We are seeing a lot of bubble activity in speculative stocks and IPOs. Keep in mind, it took the Nasdaq 15 years to recover from the dot com bust after falling 78% from peak to trough. Even if this bubble isn’t as big, the consequences of the coming crash will still be large. Initial jobless claims rose after the temporary Thanksgiving related decline. The labor market is weakening because of the pandemic. The country needed another stimulus package.