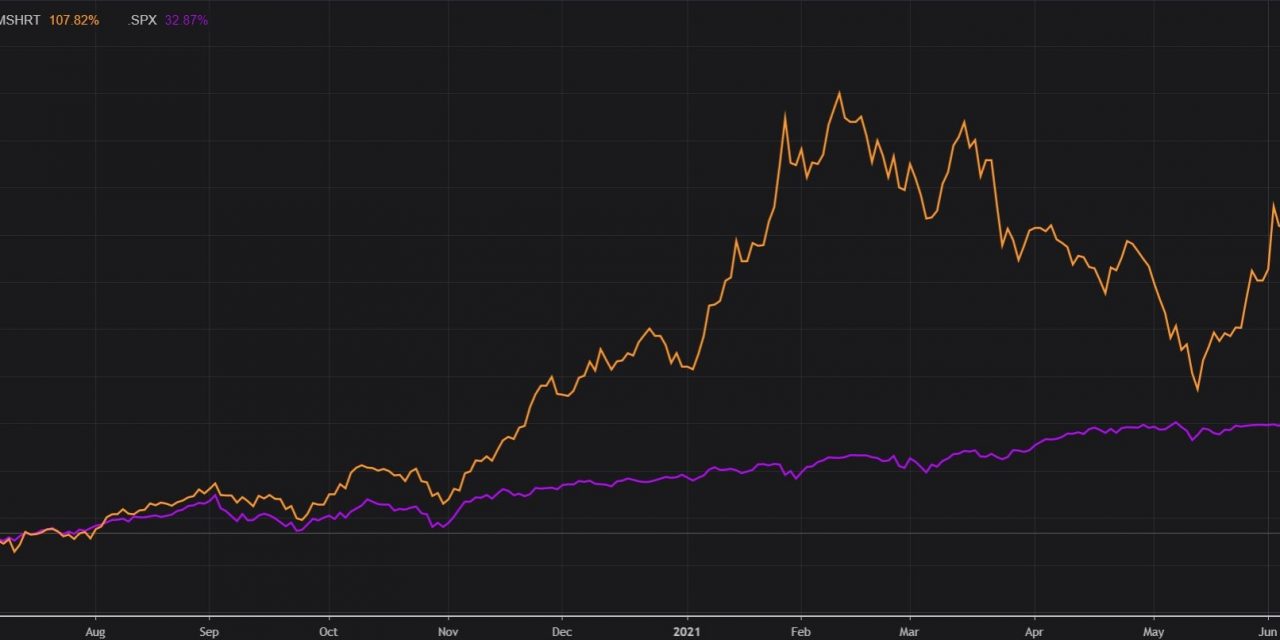 The JOLTS report continued the recent uptrend in job openings. They spiked to a record high of 9.286 million from 8.288 million which destroyed estimates for 8.045 million and the highest estimate which was 8.2 million. The April jobs report was disappointing, but it’s still surprising economists expected a decline in openings. Many industries are having a really tough time filling skilled openings. There are now 1.1 unemployed persons per job opening. Employers are also spamming openings with no serious intent to fill them. Openings have a signaling effect to competitors and investors.

This report was okay because hires also increased, albeit not by nearly as much. Hires rose from 6.006 million 6.075 million which was the best reading since last August. This small increase isn’t a surprise because job creation was disappointing in April. Hires should increase by more in May. This small increase means the difference between openings and hires rose again to a new record high. The ratio of hires to openings varies across industries.

As you can see from the chart below, manufacturing hires are about 30% of openings which is very low.

Companies either can’t find talent because they aren’t willing to do the work/pay enough to get new workers. Maybe margins are too slim to afford paying workers well. On the other hand, hires in the accommodation & food services industry are 93% of job openings. That’s also near a record low, but it signals employers in this industry are more serious about finding help. This industry is much more labor intensive than manufacturing.

The best part of this report was the spike in the quits rate because it means workers feel comfortable that the labor market will provide them with a new job. Specifically, the quits rate rose from 2.5% to 2.7% which is a record high going back to late 2000. The prior record high was last month’s reading.

There is a standoff between workers and employers on a number of fronts. One of them is going back to work in the office versus working from home. That battle will occur this summer. Workers want to stay home and employers want them to come in. The most likely compromise is a flexible schedule where employees work from home once or twice per week.

Now let’s look at the data by industry. As you can see from the chart below, the arts, entertainment, & recreation job openings rate increased from 10.3% to 11.6%. Nominally, that’s an increase from 206,000 to 248,000. Accommodation and food services openings spiked from 989,000 to 1.338 million. Hiring didn’t increase by as much especially in the former industry.

Arts, entertainment, and recreation hires only rose 20,000 to 177,000. Hiring should spike in the next few months as travel and recreation spending increase. Maybe the openings weren’t filled because it takes time to hire people. After all, there was massive dislocation in the labor market. Accommodation and food services hires were up from 1.015 million to 1.247 million. With dining out fully recovering, these jobs should all come back this summer.

The 10 year yield is much lower than it would normally be in this type of inflationary environment because it is transparently temporary. Not only are the supply chain and pent up demand situations temporary, but also everyone knows it. You have to know what everyone else knows to figure out what is priced into the market. In this case, the market is looking at inflation peaking over the next few months. The inflation surprise index has been declining. That is correlated with the rate of change of inflation.

As you can see from the chart above, the current core PCE inflation rate is normally equal to about a 6% 10 year yield. Almost no one thinks the 10 year yield should be at 6%. However, many are surprised it’s not above 2%. We’ve been getting strong CPI readings, yet the 10 year yield is now at 1.49% which is the lowest reading since early March. The other aspect of the bond yield is obviously the Fed’s QE program. The Fed is still buying $80 billion of treasuries per month. It will keep buying that amount for at least the next 6 months. Sometime next year, it will wind down that program. By the end of next year, the buying will likely be over.

Housing Is Cooling Off

Housing is about to normalized without a large burst because this wasn’t a bubble in the first place. It’s interesting that even as rates are falling demand is waning. Prices are too high and supply is too constrained to entice buyers. Plus, the pandemic is no longer pushing people to buy a house in the suburbs.

As you can see from the chart below, the national housing survey showed 42% of respondents said it was a good time to sell. The net percentage saying it’s a good time to buy fell to -21%. This will normalize supply over the next few months. Nothing crazy will happen. Those rooting for a bubble crash will be sorely disappointing. The market is about to get healthier with more supply and less demand.

All Bets Are Off

The stock market has shocked many observers in the past few weeks because there has been an echo bubble in the most shorted stocks. The orange line below shows these stocks. The spike that peaked in February was unprecedented. No one expected a repeat after the large crash that occurred this winter/spring. No one has any idea where this will go in the next few weeks. In the end, these stocks will fall. The most shorted stocks usually underperform the market, not outperform massively.

Job openings are at a record high, but these jobs aren’t being filled (especially in manufacturing). The job openings reading is becoming irrelevant. Let’s only study hires from now on. The 10 year yield is much lower than core PCE inflation indicates. That’s because inflation is about to peak this summer. Demand for housing will fall this summer which will solve the supply/demand problem. The most shorted stocks are rising again. Books will be written about this phenomenon in the future.