Rate Hikes Back On The Table? 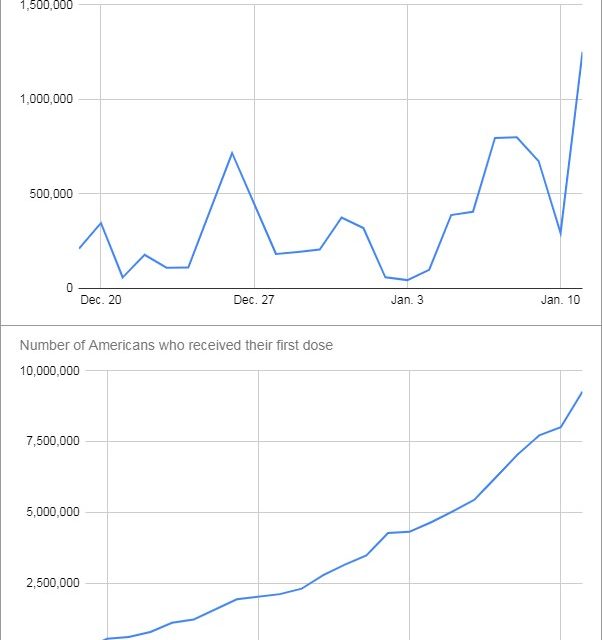 We have been desperately awaiting good news on COVID-19 for months ever since this latest wave of cases started. It has caused record deaths in December and is looking like it will break that record in January. The good news is the future looks bright on two fronts. Firstly, hospitalizations were only up 1% last week which was the slowest rate of increase since late September.

We are nearing a peak in hospitalizations. The data has fully normalized since the holiday. The spread appears to be slowing. That means the 7 day average of deaths per day could peak in a couple weeks. February should have fewer deaths than January and not because the month has 3 fewer days.

The second piece of good news is the number of vaccines per day reached a record high on Monday. As you can see from the top chart above, 1.2 million vaccines were given out. If we can get o a run rate of 36 million per month steadily, there will be a rapid decline in deaths in March. Life will get back to normal this spring. 9.27 million doses have gone out. South Dakota is in 1st with 5.45% of its people vaccinated. The start of the vaccination process was clunky, but it looks to be gearing up now. State governors are in charge of the distribution in their states. Hopefully, the lagging states learn from West Virginia and the Dakotas.

The prices paid index in the ISM manufacturing report rose 12.2 points to 77.6 which, according to the recent correlation, implies over 4% CPI is coming. We’ve seen an impressive rise in commodities prices and long bond yields. Copper is at the highest price since 2013. The 10 year yield is at 1.145%; it increased 5 days in a row. Traders have been saying the treasury market is oversold for a while now, but we are coming off the lowest yields in history.

Shouldn’t yields be high with commodity prices increasing and another stimulus coming? The $900 billion stimulus hasn’t even worked its way through the system and there are already talks of another one. Furthermore, the global economy is set to be fully reopened by the summer, with America reopening this spring. Once deaths decline in March because those over 75 will have gotten the vaccine, business will be back to normal.

The Fed has said rate hikes are so far in the distance it doesn’t even see them. My have things changed in the past couple months. Now some are betting on rate hikes by the end of 2022 as you can see from the chart above. We have been saying for months rate hikes could start in 2023, with there being an outside shot of them starting in 2022.

It doesn’t matter what the Fed has said in the past. The market can push the Fed in the hawkish direction. Quite frankly, it’s impossible for the Fed to ignore the rise in commodities prices. The Fed will begin to get more optimistic on the economy once the vaccines allow for a reopening. If the Fed starts talking about future rate hikes in 2021 and the 10 year yield is above 2%, it will be rough sledding for the unprofitable story stocks that had amazing runs in 2020.

As we mentioned, the story stocks did well last year. It was a party similar to 1999. It has become common knowledge on FinTwit that certain industries such as EVs are in a bubble. If these stocks fall more than 50% in the next few months, everyone will acknowledge it was a bubble.

As you can see from the chart below, the momentum long index has exploded.

The index’s rise above its 200 day moving average is the highest since the end of the tech bubble. With the recent drawdown at the end of the line, some wonder if the party is almost over. Tesla stock fell 7.8% on Monday (recovered 4.9% on Tuesday) and bitcoin had a 25% correction in 2 days before recovering half its losses. There is no logical way you can get mad at 2% inflation, but not care about a 25% decline in 2 days. That volatility is normal for bitcoin. Proponents claimed bitcoin was becoming less volatile as it got older, but it’s still just a speculative trading vehicle based on the easiest financial conditions in over a decade.

A business has a moat when competitors have a very difficult time gain share no matter what they do. Some competitors even give up because they can’t compete. One example of an industry with a strong moat is the credit card providers (Mastercard & Visa). It’s difficult to gain the scale they have because most businesses only accept a few cards. It would take years of losses to start a new credit card company.

The message above shows the term moat is overused because it is being applied to everything as an excuse to ignore reviewing competitive pressures. Investors feel once they found a business with a moat, they can ignore its risks. However, you probably shouldn’t do that because the moat might not be as strong as you think. This isn’t a get out of homework pass. You still have to do the work.

COVID-19 hospitalizations are peaking and the vaccination rate is rising. Hype about the reopened economy and fiscal stimuli are causing long rates to rise and commodity prices to rally. WTI is at $53 which is an 11 month high. Just 10 months ago, it went negative for a few hours. Some investors are betting on a rate hike in 2022 or 2023. Higher rates are going to cause momentum stocks to underperform and some to crash. You can’t have a 2% 10 year yield and a rise in money losing tech stocks like in 2020. Moats aren’t a way to avoid doing research on competitive threats. Investing isn’t that easy.