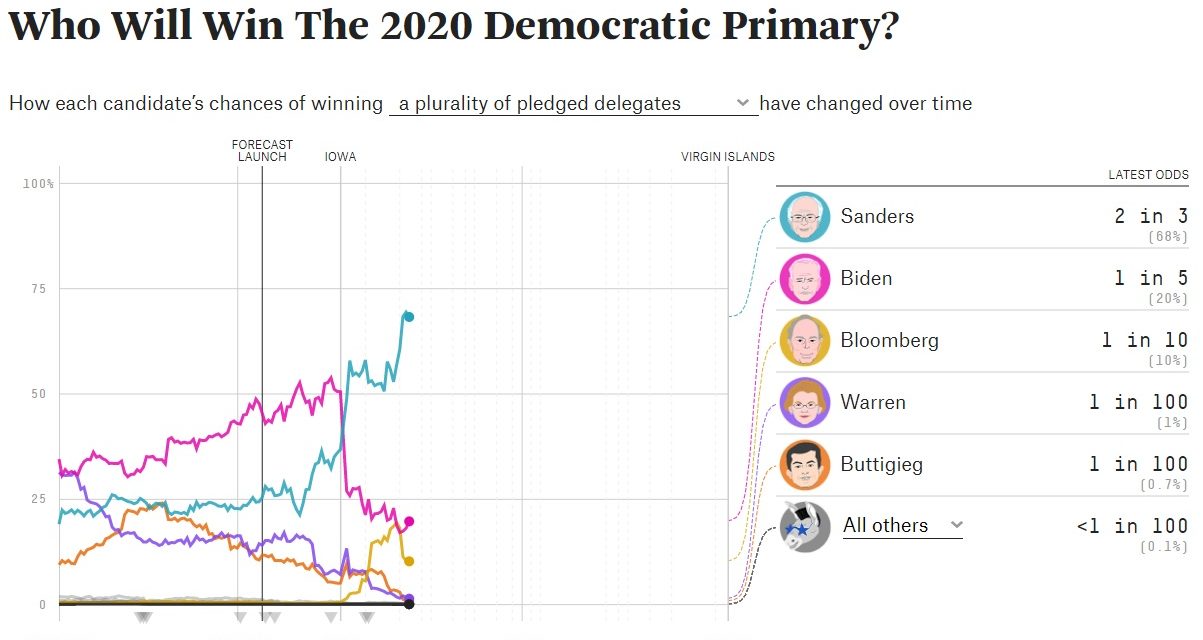 With the spread of the coronavirus in places outside of China, we have seen a first hand example of the stock market pricing in a new risk. The market was especially volatile because it saw the havoc that the virus imparted on the Chinese economy. Visualizations of that type of impact caused investors to panic. It also didn’t help that the S&P 500 touched a forward PE of 19, just as estimates are starting to come down more because of the impact of the virus. For a couple weeks it looked like the market was trying to repeat 2019 where it had sharp multiple expansion. The higher the multiple gets, the less likely it is to expand even if we do have record low yields. You can see in the table below, non-GAAP EPS growth estimates for Q1 have gone negative. Q1 EPS growth will be below that of Q4.

Sometimes the market reacts violently to new information after seeming to have ignored it beforehand. There’s a lot of money to be made in determining which risk factors will actually impact markets. Also, it gives credence to the fact that you can see a potential risk factor playing out ahead of time before it impacts markets. Like we implied, not all potential risk factors hurt stocks. That’s why some people say the market climbs a wall of worry. There are hundreds of potential low probability extremely negative events and hundreds of potential high probability negative events that won’t be large enough to hurt the economy. This concept of something that seems obvious in hindsight suddenly impacting markets could also play out in the presidential election.

Every trader on planet earth knows there will be an election this year. The PredictIt betting market shows Sanders has a 61% chance of winning the Democrat nomination, yet this is mostly still not priced in. There’s a blind spot in market participants because they likely feel a far-left candidate can’t win or that the incumbent should win when the labor market is nearly full. These aren’t necessarily incorrect concepts, but they should be already known by voters. Voters who know Bernie is a Democratic Socialist and know their job situation still chose Bernie in polls as he beats Trump by 4.4% on average. Presidential races are highly uncertain and things can change. That argument actually supports our point which is that anything can happen. The market can price this ‘new’ risk in quickly like it did the coronavirus if Bernie does well in the primaries in March.

The market was perfectly okay with China’s economy taking a hit in Q1 and rebounding later in the year. The risks were either than China would take longer to recover or that the virus would spread to other countries. The latter occurred. You can see in the chart below, the growth in cases outside of China has increased just as China is starting to recover from its economic shutdown.

You can tell investors didn’t see this potential spike coming because in a DataTrek survey 47.8% of investors stated they didn’t see the number of cases reaching above 1,000 in U.S. and Western Europe. To be clear, the virus hasn’t become prevalent in these places. The point is the stock market’s decline on Monday & Tuesday wasn’t just about the cases in Iran, Italy, and South Korea. The fear was it can spread further.

We’re not experts on diseases. We just follow markets and the facts on the virus and focus on assessing all possibilities. The situation in China is getting better as the number of new cases and deaths are falling. On February 24th, there were 508 new cases and 74 new deaths. That brought the total to 77,658 cases and 2,663 deaths. China’s economy is inching closer to normalcy as there were 2.7 million people on China’s metro system on Monday. That’s up 58% from last Friday. That’s still below the average of 11 million, but it shows progress. South Korea is headed in the opposite direction as there were 60 new cases which brought the total to 893. There have been 8 deaths. Because of the coronavirus, South Korean consumer confidence fell by the most in 5 years. The other possibility that must be considered is the virus not causing economies to shut down if governments believe that will cause more harm than good.

The thesis on the U.S. presidential election is to expect the expected to occur. That sounds weird, but when the market doesn’t price in something that’s actually expected, it’s the only way to put it. According to 538, Sanders has a 68% chance to win the plurality of delegates in the Democratic Primary. In a two party system, betting that one of the candidates can’t win isn’t a good idea (especially when the candidate expected to lose is winning in early polls). You saw how that worked out in 2016. The difference here is that markets feared Trump’s personality, while they should fear Sanders’ policies. Ultimately, investors quickly found out that if taxes are cut and corporate profits rise, unorthodox rhetoric doesn’t matter. Most news events are noise to traders.

When you have a candidate set to go against big corporations, the wealthy, the banks, the health insurers, the drug companies, fossil fuel companies, and Wall Street in general, earnings will take a hit. There aren’t many stocks that will do well in this environment. Bernie Sanders is planning to enact a Wall Street speculation tax where he will place a 0.5% tax on stock trades, a 0.1% fee on bond trades, and a 0.005% fee on derivatives trades. This is planned to raise $2.4 trillion which is going to go to pay off all student loan debt ($2.2 trillion according to the plan).

According to three regional Fed surveys, the manufacturing economy is doing well. Even the Dallas Fed index rose in spite of the decline in oil prices. Firms mentioned the coronavirus as a risk, but most are showing production growth. This situation will change if the coronavirus goes global as it seems to be happening now. The 2020 election might be like the coronavirus in that it went from a potential risk that was well-known, but not priced in, to a risk that caused stocks to fall the most in 2 years. Bernie Sanders is expected to win the nomination. Stocks not pricing that in at all seems foolhardy. You don’t need to think he will win to proceed cautiously.