One Third Of US GDP At Standstill 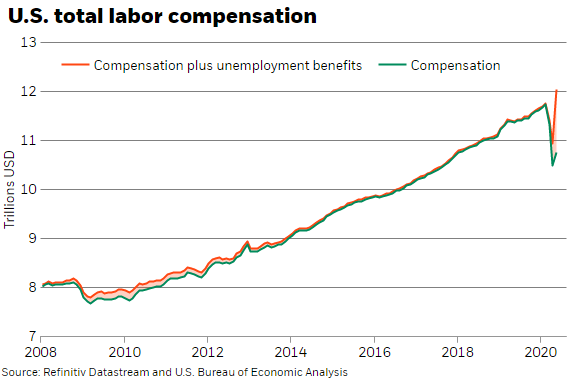 Jobless claims in the week of June 27th showed another poor result. At this rate, it will take months even to fall to the previous record high. In the past 3 weeks, seasonally adjusted initial claims fell 1.7%, 3.8% and 3.7%. If claims fall 3.7% each week, it will take 10 weeks just to get to below 1 million. The labor market is hardly getting better. The record high in March 2009 was 665,000. It would be a disaster for claims to stay above 1 million for 10 more weeks. The recent weakness could be related to the spike in COVID-19 cases. The number of deaths per day doesn’t need to increase for the economy to be disrupted. Hospitalizations have been increasing. That’s enough to get states to slow their reopening plans and for people to stay indoors. In this week’s report, California had the biggest increase in claims, while Kentucky and Oklahoma had the biggest decreases.

Continued claims were also elevated. In the week of June 20th, continued claims were up from 19.231 million to 19.29 million which was the first increase since May 23rd (4 weeks ago). On a monthly basis, continued claims fell 11% which is much better than the 29% increase in May. The weakening trend is still in its beginning stages. The weakness might be the combination of the initial boost after the reopenings ending and the increase in new COVID-19 cases in the south and west shutting those economies down. Interestingly, the states with spikes in COVID-19 cases (California, Florida, Texas, Georgia, and Arizona) combined are 34% of America’s GDP. About a third of the economy is headed towards a stand still.

Two Reasons The Recovery Is Slowing

According to a national uniform company, the economic rebound has slowed in the past week. On their conference call on Wednesday, the company stated, “It’s unclear whether this last week, it’s only been one week of a little bit lower re-openings, whether that’s from some of these states pausing their reopening efforts or whether we are hitting sort of critical mass with the businesses that remain closed and whether those – some of those maybe longer term fallout. I think it’s a mix of both.”

Which catalyst an optimist would want it to be depends on which factor is more temporary. If you think COVID-19 will go away quickly, you’d want the spike in cases to be the reason for the slowdown. If you think COVID-19 is a serious problem, you might rather the slowdown be related to the initial spike after the re-openings ending. Obviously, you can also believe neither are temporary. The easy fruit has already been picked after the reopenings. Now we must wait for the people who permanently lost their jobs to find one. We must wait for the stores/restaurants that closed to be reopened by new business owners. That’s a process that could take several quarters if not years.

You can see there have been a few hiccups in the uptrend. This one looks like a bigger blip than the others. When you include the obvious negatives that are the renewed shutdowns and the initial spike in economic activity after the reopenings ending, it’s clear there are headwinds against growth improving. Consumers could be spending less in preparation for life without the $600 weekly federal unemployment benefit.

Compensation Hardly Decreased In This Recession

Fiscal stimulus came fast and furious in this recession. It’s possible that in the deepest recession in over 100 years, consumers lost the least income. The chart below shows total U.S. labor compensation (the green line) is still down massively from before the recession because people still haven’t gotten their jobs back. However, when you include unemployment benefits, compensation is already at a new high. Remember, 68% of workers made more money not working than they did working.

As we mentioned, some consumers might fear these benefits ending. The current federal benefits end on July 25th. A few states like California have extended their state benefits, but losing $600 per week is a big deal. The GOP-led Senate does not want to extend the benefits because they don’t want to incentivize people not to work.

Critics of that idea say people would want to go back to work if COVID-19 wasn’t a problem. People want to be safe when they work. If no benefits are extended, we will test out the theory that people are only staying home because of added benefits. Obviously, that puts people in a tough spot. They are forced to choose between safety and pay. Even if claims fall dramatically after these federal benefits end, it won’t be a victory if people get sick. On the positive side, the PPP lending program was extended to August 8th. Businesses can get loans that turn to grants when they hire people. The GOP is very much in favor of private businesses paying workers even if they aren’t working (and the money comes from the government).

The monthly consumer sentiment surveys aren’t that useful in determining weakness quickly. The more often the survey data comes out, the better if you are looking for a trend change. As you can see from the chart below, in late June consumer sentiment started rolling over, with particular weakness seen in those making over $50,000 per year.

Jobless claims data has been weak for a few weeks. It’s increasingly problematic because the economy can’t afford the recovery to stall out this quickly. This trend implies the recovery will take much longer than the initial spike off the bottom implied. Weakness is occurring because the initial spike from states reopening waned. The easy fruit has been picked. Weakness is also being catalyzed by the increase in COVID-19 cases in a few states in the south and west which represent about a third of America’s GDP. If the $600 in weekly federal unemployment benefits aren’t renewed, it could be a disaster for the recovery which is already dealing with lower consumer sentiment.