Not A Typical Manufacturing Recovery 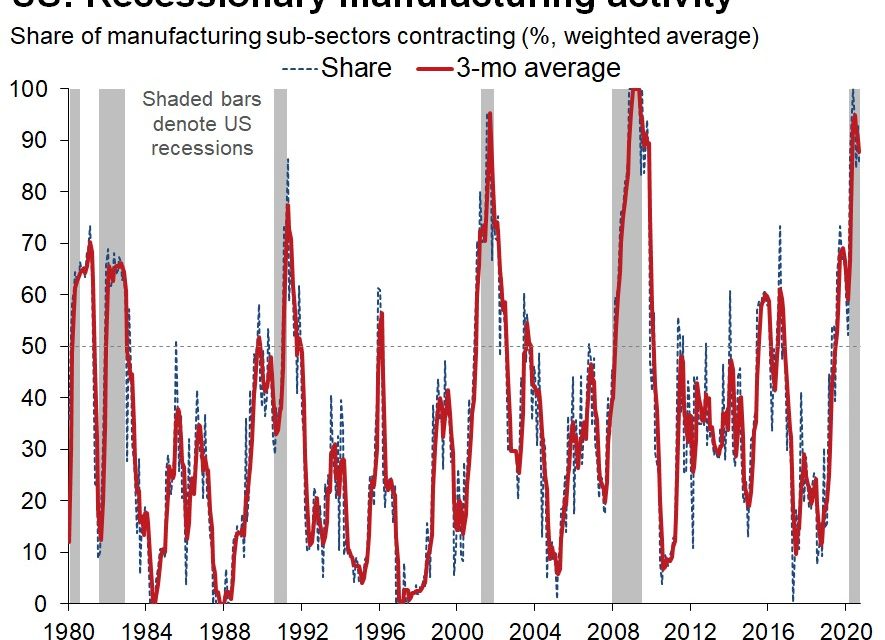 The September retail sales report completely destroyed estimates. Yearly growth excluding food services was 8.2% which was the highest growth since June 2011. The consumer benefited from the $300 in federal unemployment benefits. The benefits started in August, but it took states a few weeks to pay them. There were situations where people would get a few weeks’ worth of benefits at once. That’s basically the same as the $1,200 stimulus check.

The problem is in a lot of states the federal money ran out, so there should be a decline in October. Plus, it appears the labor market weakened this month. Furthermore, the COVID-19 cases spike has been bad in the Midwest this month (although the trend started in September). September benefited from the delayed start to the school year which increased clothing sales. Restaurant sales were strong in September, but as the weather gets colder, outdoor dining will fall off. That’s bad for the fall and winter months.

Details Of The Great Report

This report was mainly boosted by the motor vehicles and parts category which is the largest expenditure group. Growth was 3.6% monthly and 10.88% yearly. Used car sales have exploded as people don’t want to use public transportation. Because used sales were so strong, it partially explains the difference between sales in this report and the weak auto manufacturing numbers in the industrial production report which we will get to later.

As you can see in the chart above, sales growth was led by clothing which was up 10.96% monthly. It was helped by the late back to school season. The data is seasonally adjusted, but it doesn’t account for unusual timing (schools never start this late). Even with that large spike, yearly growth was still -12.46%. Sporting goods growth was 5.75% monthly and 14.37% yearly as people are spending more time outdoors because of COVID-19. Since this data is seasonally adjusted the impact is purely demand related; it accounts for the change in seasons.

Food services and drinking had 2.07% monthly growth which only got it to -14.45% yearly growth. This category has a 12.89% weighting which means a drop caused by colder weather could take down the overall reading. As you can see from the chart below, personal goods have more than recovered their losses, but services are still behind. The new COVID-19 economy doesn’t reward in-person experiences like concerts and sporting events with fans in attendance.

Online sales growth was just 46 basis points monthly, but it was still 23.81% yearly. The gains made are sticking because will still live in a COVID-19 economy; monthly growth is tough because online spending is already high. It’s up 21.6% from February, while sales at restaurants and bars are down 14.9%.

The September industrial production report was terrible as monthly growth was -0.6% which fell from 0.4% and missed estimates for 0.6%. This was way different from the regional Fed surveys which were very strong. Industrial production is 7.1% off its high as yearly growth actually fell from -7% to -7.3%. That was the 2nd straight decline in yearly growth. You can see the reversal in the red line in the chart below. The capacity to utilization rate was down from 72% to 71.5% which missed estimates for 71.9%.

Monthly manufacturing growth was -0.3% which missed estimates for 0.8% and fell from 1.2%. It is down 6.3% from its peak. Yearly growth rose slightly from -6% to -5.7%. As you can see from the chart below, a lower percentage of manufacturing sub-sectors are contracting. Manufacturing was hurt by autos (& electronics) as we mentioned earlier. The strength in used car sales doesn’t help manufacturing new cars, although, it could help parts production. Mining growth was 1.7% as it was helped by oil and gas. The weakest area of the economy found a bottom. Utilities production was down 5.6% because of weak air condition demand. Obviously, that’s not a worry as weather changes often.

The September retail sales report was great because of the extra jobless benefits. It might not be as strong in October because of the COVID-19 spike in the Midwest, lower unemployment benefits, and a weaker labor market, but we did get a boost in consumer expectations this month. On the other hand, that reading was influenced by the election. The industrial production report was bad. This isn’t a typical manufacturing recovery even though the regional Fed reports were strong in September. The ISM manufacturing report was closer than the regional fed reports as the PMI fell slightly and new orders fell sharply.