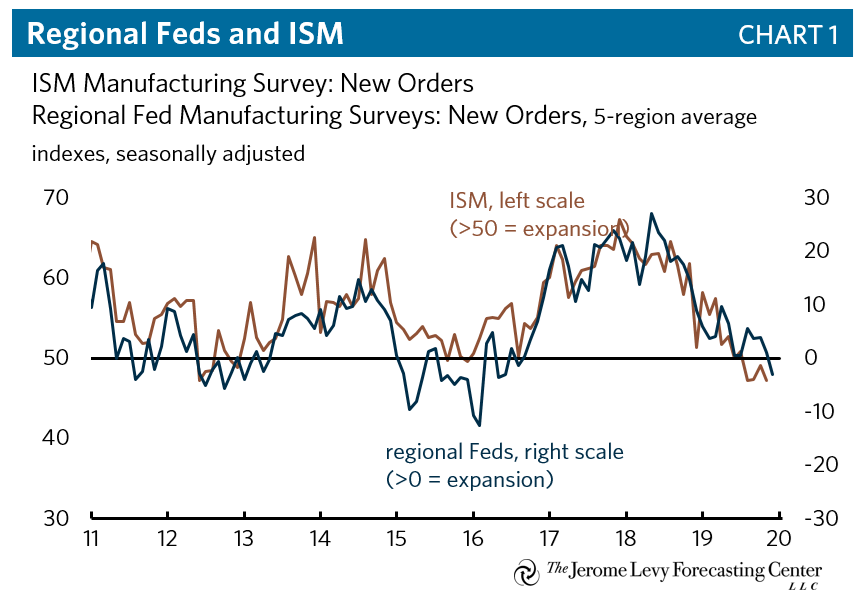 The November International Trade in Goods report showed a lower deficit than expected which raised GDP growth forecasts. Specifically, the deficit was $63.2 billion which was much below the consensus of $69.5 billion and even below the lowest estimate which was $65 billion. It fell from $66.8 billion in October. Exports were up 0.7% and imports fell 1.3%. This report caused Goldman Sachs to raise its GDP growth forecast by 0.2% to 2%; Merrill Lynch’s tracking estimate increased 0.4% to 2% (even though inventories data hurt the estimate). Two percent growth isn’t great, but it’s much better than the dire forecasts of below 1% that some had a few weeks ago. By some measures, 2H 2019 could be the trough of this slowdown. 2% growth in a trough doesn’t sound bad.

Some have been calling for Q4 to be the trough of the manufacturing slowdown/recession. The initial reports from December don’t show any sign that the sector has bottomed. The Markit manufacturing PMI fell 0.2 to 52.4 and all 5 of the regional Fed reports fell. The average of the 5 indexes was below 0 for the 2nd time of this manufacturing slowdown. The last time was June. This average is slightly above that. As you can see from the chart below, the average of the 5 regional Fed new orders indexes is the lowest since 2016. It’s forecasting another weak ISM PMI. The forecast staying above November’s PMI shows how relatively weak the ISM PMI has been in the past few months.

The Dallas Fed report was the last regional Fed report to come out. The production index actually increased from -2.4 to 3.6, but the general activity index fell from -1.3 to -3.2 which missed estimates for 1 and the low end of the estimate range which was -3. It’s somewhat surprising that analysts would call for an increase after the first 4 indexes all fell. All things considered, this wasn’t a terrible report despite the headline decline as the new orders index was up 4.3 points to 1.6 and the shipments index was up 7.5 points to 3. The expected general activity index fell 0.9 to 6.4, but within the expectations category the production, new orders, and shipments indexes all rose. They were up 5.6, 3.9, and 3.9 points to 36.9, 32.6, and 30.1. The Markit Manufacturing report came out on Thursday (we will review it in a future article) and the ISM PMI comes out this Friday.

The November Pending Home Sales report showed improvement from the previous month as it went from 106.7 to 108.5 which was 1.2% growth. That beat estimates for 1.1% growth. As you can see from the chart below, this was one of the better readings of the cycle.

Yearly growth was amazing because the housing market was weak in Q4 2018. It was 7.4%. The strongest region was the South which was up 7.7% to 125. The West had the strongest growth as its index increased 14% to 98.4. All of the regions showed growth.

Interestingly, at the NAR Real Estate Forecast Summit, the consensus called for home prices to increase only 3.6% after they increased 5% in 2019. That’s pretty low growth when you consider the consensus was for 3.8% rates which is below 2019’s average by a tenth. Considering how solid the pending home sales index was and the relative amount of inventory there is, that price growth projection might be a bit too low.

Consumers are bullish on their retirement prospects as you can see from the chart below. This question asks people the probability of social security and pensions providing adequate retirement income.

It’s no surprise, those who are older and have higher incomes are more confident. Fewer young people have access to pensions and some might not think social security will be there for them when they retire. You can see that the trend has been positive since 2014 and that the current average percentage is the highest since at least 2000. This chart’s y-axis is a bit misleading though as the current level is only a few points above the long term average.

It’s important not to assume that the returns markets have experienced over the past few years (this cycle) will continue indefinitely. They are not the norm. You likely won’t retire with enough money if you’re counting on such returns as they only occur 25% of the time and there will be negative years and cycles within that. Making unrealistic assumptions can result in you saving less than you need for retirement. As a result, that could alter your entire investment philosophy and force you up the risk curve whereby you become too aggressive and take on more risk with investments. Higher risk doesn’t simply mean the potential for higher returns, but also the potential for higher losses.

America’s population growth has been falling like many other developed economies. The hope is America can attract immigrants to improve the reduced growth since the US is a nation of immigrants; it’s a multicultural society. Unfortunately, in the past few years the US has seen a drop in immigration growth along with the drop in the natural rate of growth. As you can see in the chart below, the rate of international migration has fallen 44% from 2016 to 2019. If this trend continues, it will put a dent in America’s long term potential growth rate.

Q4 GDP growth is expected to be near 2%. That’s not bad for what was supposed to be a slowdown. The manufacturing sector may have taken a tumble in December if the regional Fed manufacturing reports are correct. The Pending Home Sales report was strong. The rise in asset prices is helping consumers’ confidence in the adequacy of their retirement. Don’t rely on great returns to have enough to retire. In the past few years, international migration growth has slowed which is bad for the long term potential growth of the U.S. economy.