No Recovery For The Bottom Half 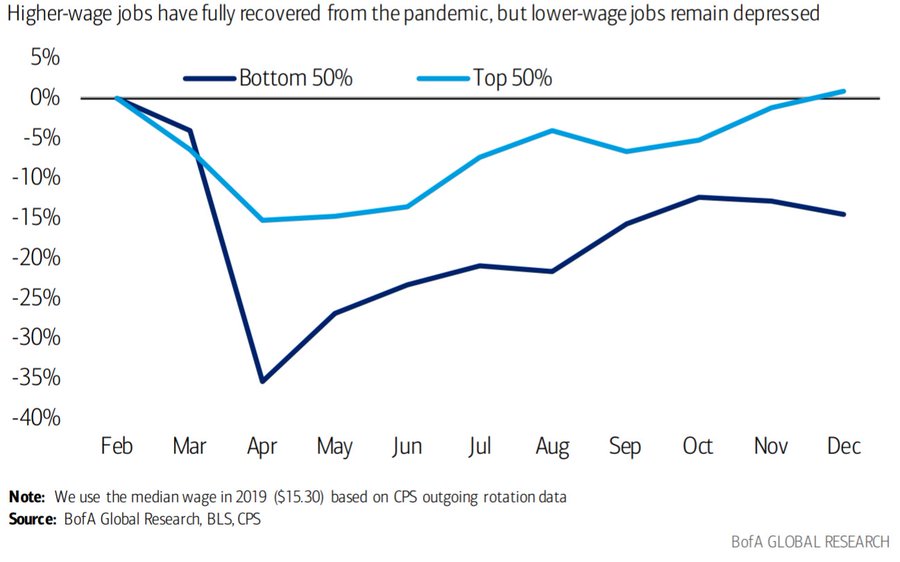 The new $1,400 stimulus has a lower income cap than the prior two rounds of checks. The first two rounds had limits of $75,000 per individual and $150,000 per couple. This one is expected to be $50,000 and $100,000. It will still cover 71% of Americans. We think it makes more sense to do it based on the median income in each area. Making above $50,000 in NYC isn’t close to the same thing as making that in rural Kansas. A $55,000 annual salary is working class in NYC. However, the government isn’t run that efficiently. There is no chance of that happening. It hasn’t even been suggested.

The good news is the Dems are proposing a $3,600 tax credit for parents of children up to 6 years old. From ages 6 to 17, the credit falls to $3,000. The thinking behind incentivizing population growth is that the US economy can only grow in the long run if it has either more immigration or a higher birth rate. Since other developed countries are seeing their populations decline already, it makes sense to get out ahead of the potential problem. Capitalism is built off growth. The saying is ‘if you’re not growing, you’re dying.’ People’s actions differ dramatically when they have kids. For example, sustainability becomes more of a focus if someone will leave behind another generation. As we mentioned in a previous article, having children has become a luxury.

This was a terrible recession for the bottom half of the country. As you can see from the chart above, the top 50% have already fully recovered their job losses. January likely got worse for the bottom 50% because the leisure and hospitality industry took another hit. Our thesis is 2021 will be the year for the bottom 50%. Small businesses and the working class will do better when the economy reopens and the stimulus is passed. There should be an increase in local restaurant spending like we’ve never seen before. People will spend as little time in their homes as possible.

According to a recent study, suicide rates didn’t go up in Massachusetts when the state was in a lockdown. The bad news is most people’s mental health has taken a turn for the worse. As you can see from the chart below, quite a few countries had more than half of their citizens say their mental health was hurt by COVID-19. It’s surprising to see anyone saying the pandemic helped their mental health.

Oil Is On A Rampage

The energy market is the exact opposite as it was 11 months ago. Crude oil hit a 52 week high for the 5th day in a row as it is up 15% over last year. Inflation is coming. The price of WTI oil can easily rise into the low $60s. Last year, oil prices went negative; now there are calls for a super cycle. Sentiment has changed because the vaccine has curtailed COVID-19. Plus, the crude surplus is very close to being fully diminished as the chart below shows.

The global inventory year over year surplus has fallen 253 million barrels which is a 57% decline in 18 weeks. When the economy reopens this spring, that surplus will crater further. Demand has plenty of room to increase in America. As we mentioned, people are not going to want to stay inside at all. It’s basic human nature to want to experience traveling and gathering after not being able to for over one year.

The table below shows JP Morgan’s super-cycle analysis. The current forecast calls for deficits in 2023, 2024, and 2025. They are predicting $61 oil in 2021 and $66 oil in 2022. If the market sees there will be a deficit for 3 years, in 2022 it will start to price that in. The current rally is about the industry coming back from the worst decline in the past 90 years. Actual optimism about future deficits isn’t priced in.

The rally this year isn’t much in the grand scheme of the cycle. That being said, if oil were to spike to $100 in 2023, demand would come down which would eliminate the deficit. A small deficit can cause large price increases because the price is based on the marginal barrel. That’s why oil is so volatile. Worrying about the demand destruction $100 oil causes is a dream scenario for oil companies and energy investors.

As you can see from the chart below, the 5 year breakeven inflation rate is the highest since March 2013. Commodities prices are soaring. For example, corn is at a 7+ year high as it is up over 50% in the past year. Lumber prices are at a record high as they are up 117% in the past year. The market is getting ready for a massive ramp in commodities demand.

We are headed for a new cycle where the long duration trade doesn’t work. In a rising rate environment, buying a stock that grows sales at 5% and has a 30 PE ratio doesn’t work. That company will continue to grow its sales at 5%, but the PE ratio will fall to 20. On the other hand, cyclical stocks like energy and banks will be rewarded as capital flees the growth names.

Fewer people will get the next round of checks, but it’s still more than the bottom half of the country which has gotten a raw deal in this recession. Mental health was hurt by the virus as there were shutdowns and obviously deaths. Oil prices have done well in 2021. That’s because the market sees inventories falling when the economy reopens in a couple months. JP Morgan sees future oil deficits which should spike the price of oil further. The deficits won’t last with oil above $100, but that’s a problem oil companies would love to face. Above $100 oil would make plenty of green energy projects viable ironically. Inflation expectations are high because commodities prices are soaring. We have zero percent rates, QE, a giant fiscal stimulus, and an economic reopening. This is the perfect scenario for inflation to rise.