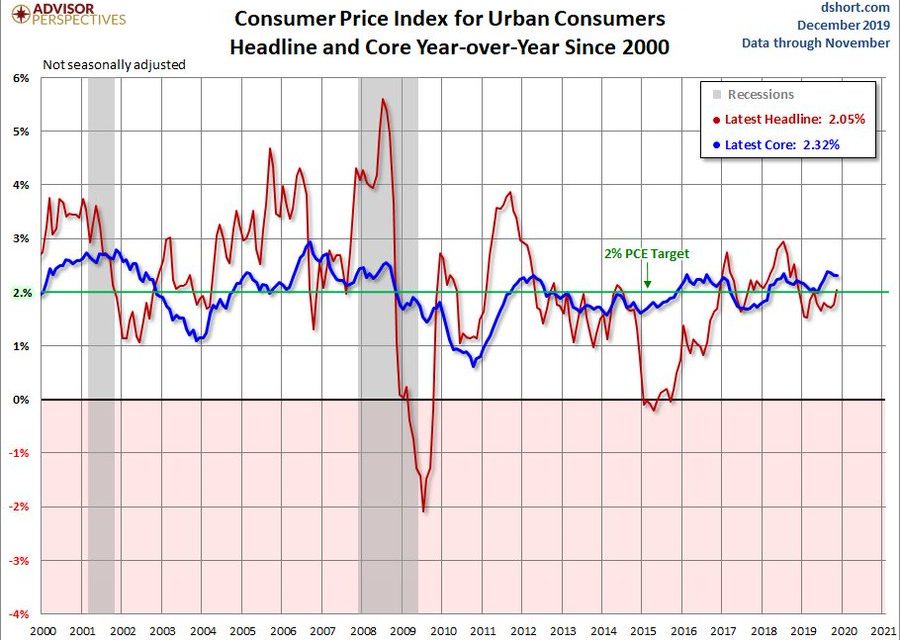 The December Fed meeting was one of the least discussed in about 1.5 years. The statement really was boring as there were hardly any significant changes. That’s not necessarily a bad thing for the Fed. Interestingly, after a run of bad returns on Fed days since Powell became chair, the stock market has been up 3 straight times, not that Powell is trying for a small temporary increase in stocks. This meeting wasn’t hyped because the Fed wasn’t expected to move rates (it didn’t) and isn’t expect to move them in the near future. There wasn’t uncertainty about this meeting and there isn’t much for the next few.

While this meeting wasn’t exciting, it was important because it’s one of the few which includes an update to guidance. The table below lists all the changes to expectations.

The most notable change can’t be seen. At the September meeting, 9 FOMC members stated they wanted to hike rates in 2020 and one even called for 3 hikes. 8 stated they wanted rates to stay the same. This time, just 4 of 17 called for a hike. It’s worth noting that voting Fed members will be rotated next year. This makes the March meeting important as it’s the next with economic projections. If the Fed is in agreement with policy, this rotation might not matter. The most active Fed member on Twitter, Neel Kashkari, will become a voting member.

The table shows rates staying the same in 2020 and then increasing once in 2021. It’s interesting to see the stock market increasing slightly on Wednesday because the Fed funds futures market hasn’t been pricing in any chance of a hike for months. The Fed not calling for any hikes in 2020 is it catching up to the market. In the past few weeks we’ve been watching the odds for a cut not a hike. On the other hand, this is a dovish move for the Fed, so stocks rallied slightly even though no hikes have been priced in for a while.

The other important point in this table of economic projections is that the Fed sees core PCE and headline PCE inflation being 1.9% in 2020. That’s important because, as we will get to next, the Fed won’t hike rates unless inflation spikes. If the Fed is expecting 1.9% inflation, it would need to, at the very least, get above that before the Fed acts. Throughout this cycle, core PCE inflation has only briefly gotten above 2% when it has had easy comps, making Fed rate hikes to combat inflation in 2020 unlikely.

In Powell’s press conference, he suggested rate hikes would only come in 2020 if inflation spikes. That’s not a new perspective. This increases certainty that the Fed won’t hike soon. He specifically stated, “In order to move rates up, I would want to see inflation that’s persistent and that’s significant. A significant move up in inflation that’s also persistent before raising rates to address inflation concerns: That’s my view.” The Fed keeps talking about potential hikes, but the market sees a cut as way more likely. There is a 62.8% chance of a cut next year and a 0% chance of a hike. It makes sense for the Fed to avoid moving rates because it’s waiting to see how its 3 rate cuts in 2019 impact the economy in 2020.

The November CPI inflation report came out the same day as the Fed mentioned it wouldn’t hike rates unless inflation significantly moved higher. It’s no surprise inflation didn’t spike as both headline and core inflation stayed near the Fed’s 2% target (which is for PCE inflation).

As you can see from the chart below, headline CPI was 2.05% which was up from 1.77% in the prior month and slightly beat estimates for 2%. This was the highest rate since last November and eats into real wage growth.

Production and nonsupervisory real wage growth is still very strong though. The increase in headline inflation, moving it closer to core inflation, was all about energy. Energy inflation increased from -4.2% to -0.6% which was the highest rate since May 2019. The tough comps are over for now. We wouldn’t be surprised to see positive energy inflation in the next 2 months based on the easier comps.

Core CPI was 2.3% which met estimates and was the same as last month rounding to the hundredths place. Since it technically fell, this was the lowest reading since July. Food inflation was 2%. It’s no surprise food away from home inflation was high at 3.2% (food at home 1%) because leisure and hospitability wage growth has been strong. Growth was 3.45% in November which is above the overall average of 3.1%. It’s also no surprise, services less energy services inflation drove almost all of core inflation. It was 3%, while core commodities inflation was 0.1%.

The Fed isn’t going to hike rates in 2020. The December meeting wasn’t that interesting as the Fed said what was expected and what it had previously said. It’s good news for risk assets that monetary policy is modestly accommodative and not uncertain. There wasn’t much change in the November CPI report. Medical care services continued to drive core inflation higher. Because of the way PCE inflation is calculated, it again won’t see the level of impact core CPI saw (not that 2.1% core PCE inflation would be enough to cause the Fed to hike rates anyway).