No Peak In Sight? 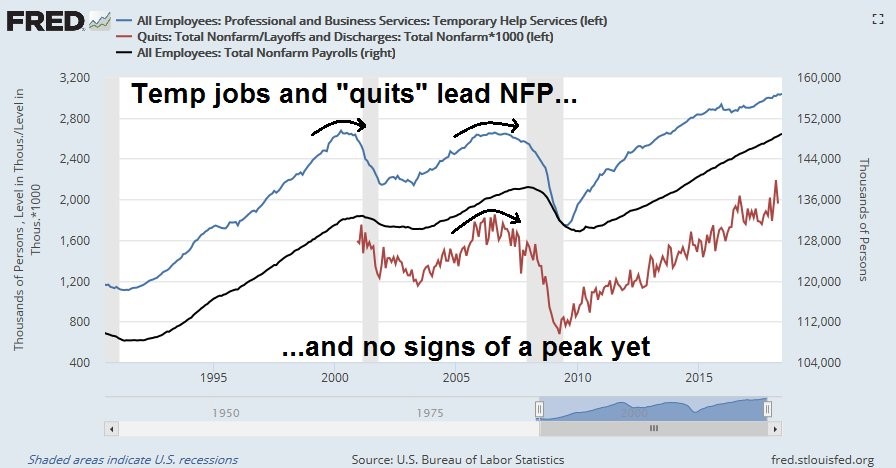 Consumer confidence and small business confidence are very high, which signals the economy is doing well. They aren’t leading indicators of future expansion, but they also aren’t indicators of the coming demise of the cycle. Because the confidence levels are high before recessions, people mistakenly think they lead to recessions. However, there’s nothing bad about high confidence. Confidence can stay high for a while as we’ve seen. Just because an indicator is at highs does not by default make it a contrarian signal to invest in the opposite direction. If you went bearish because of the boost in small business confidence in December 2016, you have been wrong for 19 months. To be clear, it depends how you express your bearishness. That caveat shows that you could have lost out on opportunities to make money or actually lost money shorting the market. Either way, selling stocks in December 2016 was a very bad idea in hindsight.

Specifically, the June NFIB small business index was 107.2 which was the 6th best reading since the indicator was started 45 years ago; this puts that report in about the 99th percentile. 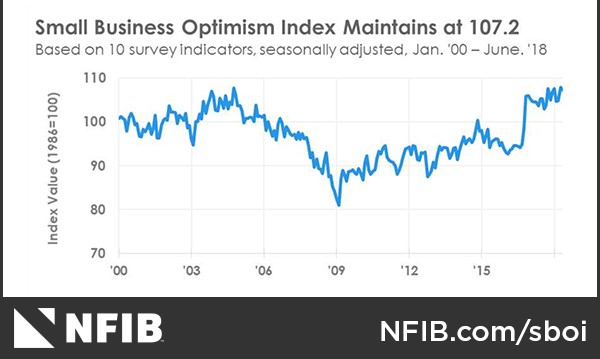 The May report of 107.8 was the 2nd best ever. There was modest weakening in the June report, but nothing to worry about because the May report was so amazing. Even if future reports don’t match May, it doesn’t mean a recession is coming. The headline index has hovered around these levels since December 2016. This isn’t a permanently high plateau, but it is stubbornly high if you’re a bearish investor.

Just like the JOLTS report showed, job openings were strong. In the NFIB report, 31% of firms had openings for skilled workers and 13% had openings for unskilled workers. 36% of firms stated that finding qualified workers was the biggest challenge they faced. This was up 3% from last month and matches the record high set in November 2000. It’s surprising to see that the inflation and compensation readings in the NFIB survey were down with this backdrop of the increasing inflation readings from the PPI, CPI and PCE indexes. The net small businesses raising prices was down 5% to 14%. 24% are planning price hikes which was down 2%. Those saying worker compensation was up was down 4% from the record high in May. 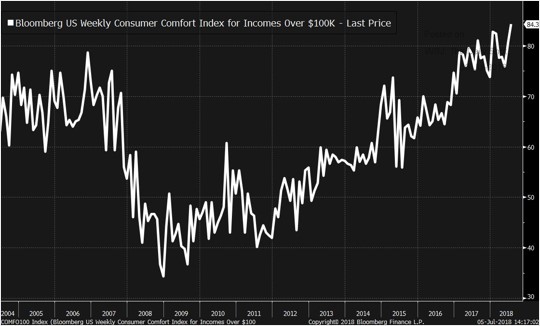 Since the labor market is in the longest streak of monthly job growth ever, by far, investors are wondering when this expansion will end. To be clear, the jobs report was one of the indicators which didn’t imply the economy was in a recession from mid-2015 to early 2016. The FRED chart below shows the temporary help services in the professional and business segment and the quits rate are leading indicators for the job market.

Temporary employment is an early signal because it’s easier to terminate temporary workers than to fire full-time workers because businesses can simply not extend their contract. If this is occurring in the overall temporary market, it means business sales are stalling or declining.

Secondly, if a worker sees sales are drying up at their firm, the worker won’t take the chance of quitting their job to find a new one because they knows other firms in the industry won’t be eager to offer better pay and to hire new employees. Switching jobs is a big deal in a person’s career. These workers are highly sensitive to changes in the economy and have inside knowledge of how well the companies in the industry are. This information all means that the labor market isn’t close to the end of the cycle because the temporary hiring is up and the quits rate is high.

Productivity gains and a tight labor market are great for wage growth. The Atlanta Fed tracker has been negative on wage growth. The latest 3 month average wage growth is 3.2%. It has been stagnant while the weekly earnings growth reported by the BLS and the employment cost index have been increasing steadily. The chart below compares the quit rate and the prime age labor participation rate to the Atlanta Fed wage tracker. Clearly, the tracker isn’t on the same page as the other data. Since it is a viable stat, it will probably show improvement by the end of 2018. 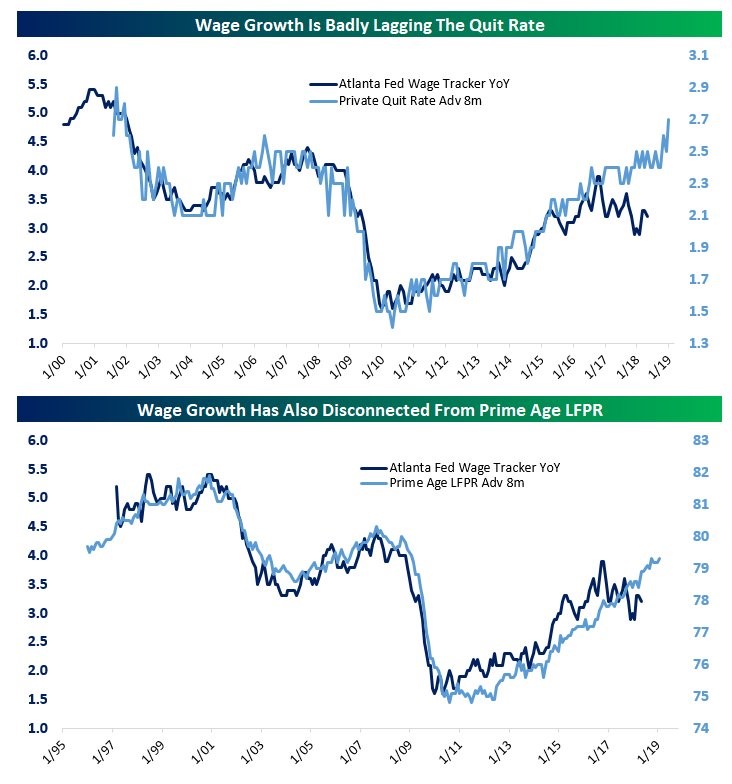 As you can see from the Goldman Sachs charts below, the American prime age labor force participation ratio for men and women are below the advanced economies average.

To be clear, the overall percentage has dropped because of an aging population and young people working less. The prime age ratio ignores those factors. It suggests not enough Americans are working. Either the cycle has many years of improvement further or many Americans aren’t skilled enough to get jobs.

One third of the issue, according to Goldman Sachs, is the extremely high incarceration rate in America and the opioid epidemic. 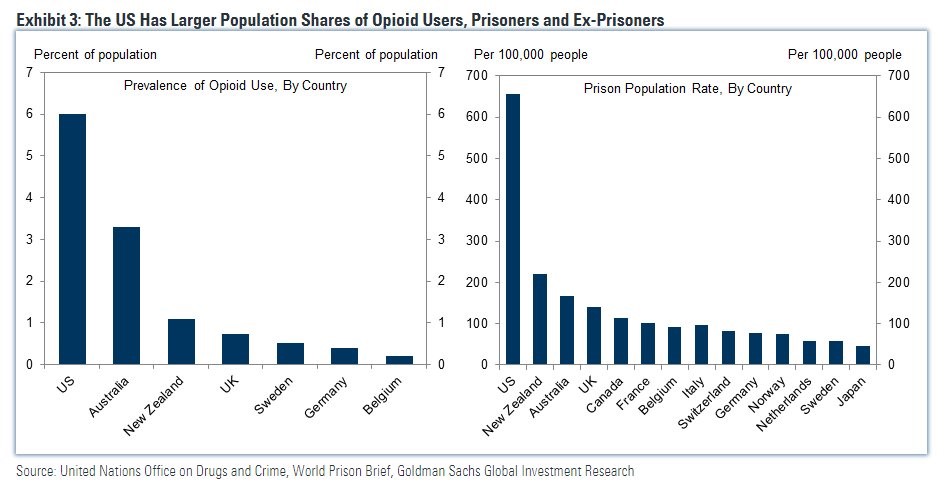 Because of the war on drugs, these two issues are related. It’s difficult to get a job if you are an ex-felon; even a short sentence because of drugs ruins a person’s career opportunities.

There’s is no end to the business cycle in sight as consumers are confident, small businesses are confident, temporary workers are being hired, and workers are quitting their jobs at a high rate. On the negative side, America has a low prime age participation rate partially because of high incarceration and opioid rates. Even if wage growth accelerates, it won’t help these people without a job. On the positive side, a strong job market can bring some of these people back into the labor force as we saw in the June employment report.