No More Recessions Ever Again? 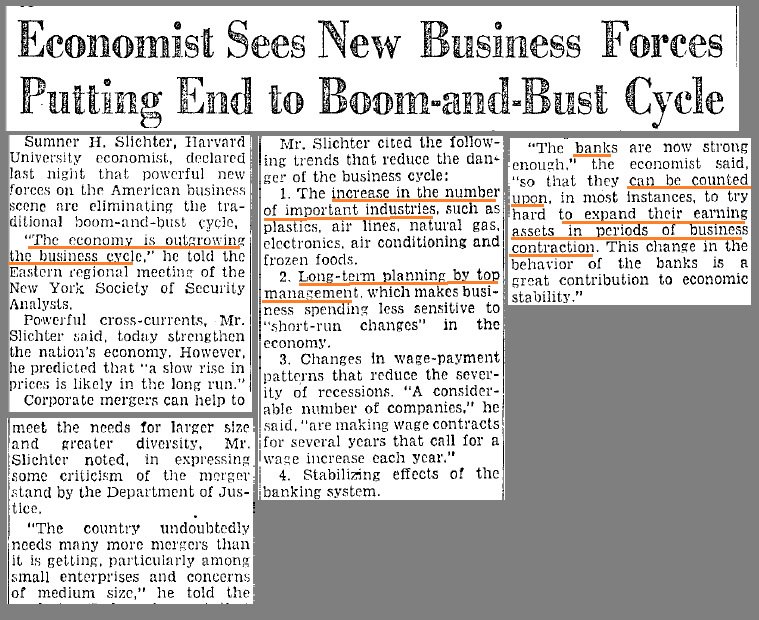 Now that the recession scare is over, the chatter on Wall Street is about how there might not be a business cycle any longer. Specifically, Twitter user Teddy Vallee quoted JP Morgan stating, “The reality is that maybe the word ‘cycle’ is no longer even relevant, given that we have so much unconventional central-bank involvement.” It’s amazing how quickly the narrative shifted from expecting a recession in the near future to not expecting one ever again.

There is a tendency to extrapolate previous events onto the future and exaggerate claims to make the news and sound intellectual. However, we can’t keep up with the noise of such vacillating opinions. It’s predictable that some would say the business cycle is over because this is about to be the longest one since the 1800s. However, that doesn’t make it true.

A long expansion shouldn’t change your viewpoint of expansions because there is no defined length of time recessions and expansions must last. This isn’t the longest expansion in world history. It’s simply about to be the longest one for America in modern times. We know the business cycle and recessions still exist because there have been economic slowdowns in this expansion. During these slowdowns, there hasn’t been a negative catalyst to knock the economy into a recession.

We could see how someone would say there will never be a recession again if the expansion was uniformly strong. However, the U.S. economy is in its 3rd slowdown of this cycle. As you can see from the newspaper image below, the concept of the boom bust cycle potentially ending isn’t new.

In 1956, a Harvard economist stated, “The economy is outgrowing the business cycle.” The next recession started in the summer of 1957. This economist didn’t need to wait long to be wrong. That doesn’t mean there will be a recession next year. It just means the business cycle still exists.

If you don’t manage money, you might not be familiar with the pressures fund managers face. Fund managers almost always need to invest in something and can’t underperform for long. They face career risk if they take a big stance against the market and are proven wrong. Being a fund manager can hurt performance because investments don’t play out on a consistent predictable time table.

It’s good in the sense that managers need to question their thesis, which means they must respect the market. Some individual investors underperform because they don’t question themselves because they can’t get fired from managing their own money. Sometimes when investors are wrong, they seek out evidence to support their failed thesis, putting them in a bigger intellectual hole and causing them to underperform because they don’t correct their initial mistake.

Fund managers were caught being skeptical of this rally in March according the Bank of America survey. As the chart below shows, fund mangers stepped up their equity exposure and lowered their cash stake because they needed to chase the market. This is bad news for investors that are bullish because there are less bearish investors that can invest into the market (convert to bullish) to provide fuel for a rally.

Everyone is following the trade negotiations between America and China, but recently there was a breakthrough in the discussions between China and Europe. China agreed to engage with Europe to amend the policy where Western companies are forced to share technology with China as a cost of doing business in the nation. China has leveraged its large market to get Western technology which is then used by Chinese companies to undercut Western competitors. If China wants to enter the next stage of its development, it needs to play fair and have freer markets. The steps with the EU were only the first ones. China and the EU aim to conclude their investment agreement in 2020 where China will have open markets and it will end discrimination against foreign investors.

Therefore, China is working through long term issues on trade and the freeness of its markets along with the short term issues of the cyclical economy. Looking at the recent numbers, China’s Q1 GDP growth was 6.4% which beat estimates for 6.3%. The table below shows the recent reports. The orange column on the left shows the expected results and the yellow column shows what was reported. The orange column on the right shows the previously reported results. Industrial production increased 8.5% yearly which beat estimates for 5.9% and was the quickest growth since July 2014.

As you can see from the chart below, retail sales growth was 8.7% which beat estimates for 8.4%.

Growth has spiked a few times since 2013, but each increase was only part of a long term trend of declines. The negative effect of this growth improvement is that China might pull back on monetary easing because GDP growth is already on the high end of the government’s expected range for 2019 which was 6% to 6.5%.

As the chart below shows, real estate investment growth was 11.8% which beat estimates by 0.2%. The urban surveyed employment rate fell from 5.3% to 5.2% which was 0.1% lower than estimates.

The fact that China can easily pull back from its stimulus makes some skeptics believe this improvement is temporary. China probably will pull back when the trade deals are done. Therefore, the long term good news on trade is far more important than a bunch of economic reports beating estimates because of the stimulus.

The business cycle still exists. It’s not good for the bulls that investors are so optimistic that they don’t see a recession happening ever again. It’s also not good to see fund managers buying equity and lowering their cash position. The Chinese economy is improving sequentially, but that might cause the government to pull back on stimulus. The productive trade negations with Europe are a far bigger deal than a GDP print beating estimates by 0.1%.