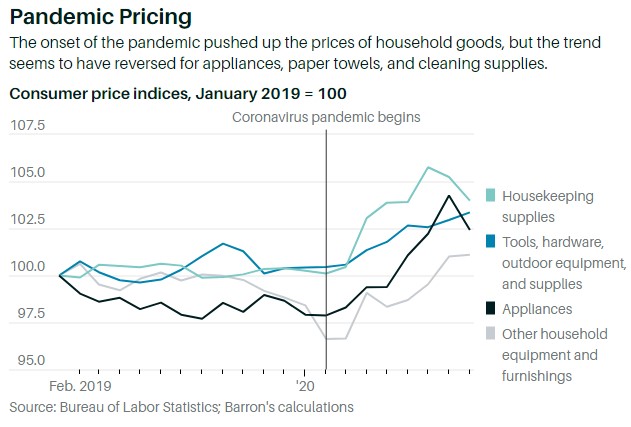 Somehow despite the data points that show a large percentage of small businesses can’t afford rent, the NFIB small business confidence index was strong in September. We’re not talking about this on a rate of change basis. It is strong compared to where it was last cycle. The index rose from 100.2 to 104 which beat the highest estimate of 102. The chart on top shows confidence is higher than most of the last expansion. We don’t think things are as good for small businesses as they were in the last few years of the last expansion, but given the choice, we’d rather see optimism in this index than not.

Every category within the NFIB report went up except the net percentage expecting better credit conditions which fell 1 point to -5%. The biggest improvement was in the net expecting better earnings trends which rose 13 points to -12% (it’s almost always negative). The net expecting the economy to improve rose 8 points to 32%. As the bottom chart shows, small business hiring plans are above where they were before the recession which sounds weird because many small businesses are hurting dearly.

Almost No Change To CPI

CPI barely changed in September. Headline yearly CPI was 1.4% which was up from 1.3% and core CPI stayed at 1.7%. Not that the Fed would have raised rates if core CPI was above 2%, but it certainly won’t with core CPI below that threshold. Core PCE inflation is usually below core CPI. We are very far from the Fed doing anything other than expanding the size of its balance sheet and keeping rates at zero.

The most important aspect of the CPI report was the weakness in shelter inflation. As you can see from the chart above, shelter inflation fell from 2.3% to 2% which is the lowest reading since February 2012. That’s interesting because the housing market is the strongest since the 2000s. If you want to buy a house, 2% price growth is a pipe dream for most areas. The decline in shelter inflation was driven by hotel costs as people are traveling less and weakness in rent price growth. It’s tough to raise rents when there are restrictions on evictions. Since shelter is the biggest part of CPI, it’s no surprise it barely changed increase.

The other important decline was in medical care services inflation. That was down from 5.3% to 4.9%. It’s well off the June high of 6% which was the highest reading since 2000. This time the decline wasn’t because of tougher comps as the comp was just 0.1% higher. A big notable in this report was the spike in core commodities inflation (no energy or food). It rose from 0.4% to 1% which is the highest rate since July 2012. For the past 7 years, the rate has been negative most of the time. This spike was caused by the increase in used car and truck prices as that inflation was 10.3%. Look for that to cool off as the initial demand for used cars wanes and some people go back to public transportation. There could even be a flood of used vehicles on the market when COVID-19 is fully under control.

Speaking of COVID-19, the chart above shows many of the products that were in high demand saw a decline in inflation or a moderate increase. Housekeeping supplies and appliances saw their CPIs fall. We always knew this supply/demand imbalance couldn’t continue. There was inflation in the stuff everyone wanted following the pandemic. Either supply will match demand in the new economy or demand will go back to normal. Demand might even fall as people don’t need to buy new appliances once they have them.

The stock market is wildly favoring the stocks that do well in the COVID-19 economy. That’s either correct or incorrect. There is little in between. It’s fair to say that demand for work from home products and services will be higher than it was in 2019 even after the economy fully reopens. However, when/if demand falls, the work from home stocks will fall. The chart below shows fund manager positioning as of October.

Energy has a z-score of -2.1. U.S. production has fallen from about 13 million barrels per day to less than 11 million. It won’t be easy to ramp up production as demand increases. The CEO of an energy company stated, “What we’ve done for the last five years is we’ve drilled the heart out of the watermelon.” The easy pickings have been gotten, there isn’t financing available for energy, and many of the smaller players have gone bankrupt. This is a recipe for higher oil prices.

There is one part of energy that has done very well. It’s clean energy. The chart below shows the massive divergence between the two. This comes down to investors being focused on the future. Energy stocks are like a very short duration bond. However, it’s very possible dirty energy lasts a lot longer than the few years some think it will.

SaaS investors love to discuss the high retention rates these companies have, but they don’t like to talk about how easy it is to create a SaaS company. The competition is getting fiercer which means getting new customers is harder which means there is a lot of pricing pressure. The graphic below shows all the competitors in project management. The longer these SaaS stocks rally, the worse the industry dynamics will be for incumbents. High competition will also last longer. It’s better to invest in industries with low competition or competition that’s becoming weaker.

The NFIB index shows small businesses are confident which is odd given their struggles. Overall and core inflation were nearly unchanged, but shelter inflation and medical services inflation fell sharply. Plus, some COVID-19 products saw a decline in inflation. Investors are long healthcare and very underweight energy. Only clean energy stocks have done well this year (not dirty). SaaS is a very competitive industry as it’s very easy to create a new application. That’s why there are so many of them.