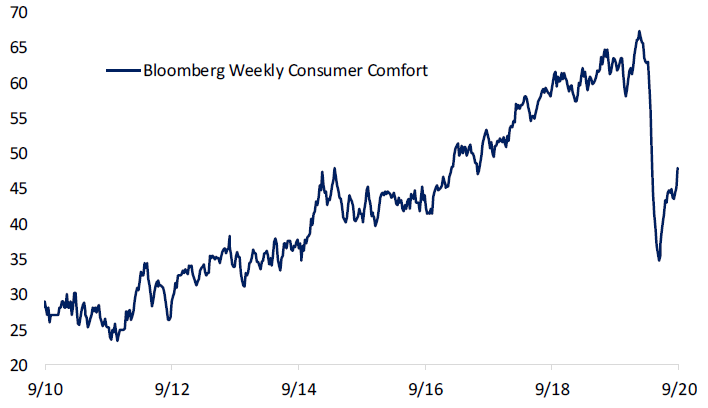 The jobless claims report from the week of September 5th was a mixed bag. There are a few twists with this data update which must be noted or you’ll be misled by the headlines. Seasonally adjusted claims stayed the same at 884,000. This is the 2nd week with the new adjustment. The only thing we can see so far is the seasonal adjustment put claims closer to non-seasonally adjusted claims. It’s unfortunate that the seasonality component changed right in the middle of the biggest cyclical shift in this report’s history. We’ve been looking at the NSA number anyway though.

As the chart below shows, NSA initial claims rose from 837,000 to 857,000 which means they have increased 2 straight weeks. However, we can’t stop there. NSA claims largely increased because of Hurricane Laura and the wildfires in California. There were 7,199 more initial claims in Louisiana than last week which was a 44% increase. The map above shows the spike in claims was in the southwest of the state which is where the hurricane hit. There were 9,657 more claims in Texas which was a 17% increase. Hurricane Laura didn’t impact Texas nearly as badly which is reflected in the smaller increase. Most of Laura’s impacts on the labor market will dissipate over the next few weeks. On the other hand, the wild fires might not get better soon. They are partially why there was a 17,953 increase in claims in California which was an 8% increase. California is so large, moderate impacts to it have outsized impacts on national data.

PUA initial claims rose from 748,000 to 839,000 which almost puts them higher than normal initial claims. Most of the increase in the past few weeks has been because of Arizona and California as the table below shows. In 2 weeks in August, more than 100% of the increase in PUAs was caused by these 2 states. California’s data is off. There was a big spike in California’s PUA continued claims potentially related to fraud. Furthermore, the California EDD says 1.8 million people are getting PUA payments, but the federal DOL shows 7 million Californians getting them. The cumulative initial PUAs is 3.3 million, meaning the 7 million number is wrong. We’re always skeptical of bounces when it’s due to one state. With potential fraud involved, there’s no reason to use NSA PUAs to generate a bearish thesis on the labor market.

It’s worth noting that PEUC continued claims should be followed closely in about 6 weeks when the 26 weeks of continued claims get exhausted. In the week of August 29th, continue claims increased slightly from 13.292 million to 13.385 million. Continued claims were so high this cycle because everyone went on them at once. Last cycle, benefits were extended to 99 weeks because the recovery in the labor market was slow. This time, benefits were increased for a short time because this looks like it was a very deep, but quick recession.

The increase in unemployment benefits was one of the most effective fiscal policies ever enacted to alter a cyclical slowdown. It’s common to see the government slow to react. We might see a stimulus next year if the Democrats win the election. That would be an example of a late stimulus. It could actually create inflation of the economy is in good shape by then. On Thursday, the Senate didn’t vote in favor of the GOP’s pared down stimulus. You would think the GOP would want to pass as much stimulus as possible to win the election because it is the incumbent party. You would think the Democrats would rather pass some stimulus than nothing, but they didn’t support the plan.

Major Changes To The Economy

For much of the past few months, the latest COVID-19 data hasn’t mattered to markets. That’s because the market settled on the notion that this wouldn’t be a catastrophe and that the economy would be reshaped. As long as daily new deaths didn’t reach a new high, the idea of a catastrophe was taken off the table. Secondly, as long as there was some fear of COVID-19, the momentum internet stocks rallied.

There still aren’t indoor gatherings and most people still aren’t going back to the office even though daily new deaths have fallen. This is what the market was betting on when tech stocks rallied this summer. The holy grail is a vaccine, but that’s not the only way to get the economy back to normal. If daily new deaths keep falling, we could see a return to normalcy without a vaccine. That would shock some tech bulls. The 7 day average of new cases was 36,281 on Thursday (lowest since June 26th) and the 7 day average of new deaths was 750.

The chart above shows the huge changes to the economy by showing the industries with the best and worst job creation in the past 6 months. Areas such as performing arts & spectator sports and arts & recreation were hit hard. There will be some long term impacts of the virus, but these industries will come back. Some people act like a 6 month change suddenly means the world won’t right size. Generally, those people are in technology which has benefited from this trend change.

The Bloomberg Consumer Comfort index went against the consumer sentiment and confidence surveys from August. In the last week, consumer comfort rose the most in 11 years as the chart below shows. It increased 2.7 points to 47.8 which was the biggest jump since April 2009. Men and upper income people had the biggest gains. The buying climate index rose to a 5 month high of 42. Sentiment on the economy and personal finances increased to the highest since early April and late March. Those making under $50,000 have seen no change since mid-July, but those making over $100,000 have seen a 10.3 gain in 2 weeks.

Jobless claims are tough to gauge because the data from California doesn’t make sense. There was a national increase due to natural disasters which aren’t related to measuring the recovery. There has been a huge change in the labor market in certain industries. This isn’t going to last indefinitely. We don’t need a vaccine for sports to have people in the stands. Activity has gradually normalized in the past few months, while new cases and deaths have still fallen. There was a large increase in consumer comfort possibly because of the rally in the stock market.