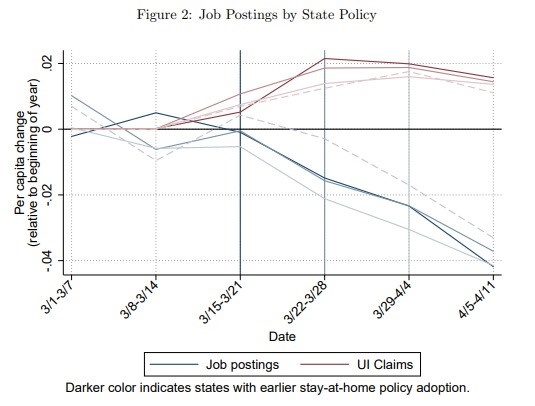 Narratives tend to trail the market, meaning people come up with explanations of why the market moved after it happened. Effectively you can justify why any move happened. That’s problematic because some moves end up being head fakes and narratives ignore valuations. Firstly, if a great narrative convinces you to buy after stocks have already rallied, you will be flummoxed when the narrative instantly changes on a down day.

Stocks have supposedly risen on trade hopes and fallen on trade fears numerous times in the past few years. These are mostly meaningless characterizations. If you believed the fear in March too much, you would have avoided great buying opportunities. Valuations are critical. Prices got cheap enough in late March that even a recession wouldn’t cause much more downside. You needed to believe a depression was coming to bet against the market when it was down 34%. Stick with the facts and don’t let near term price action impact your thinking.

The bull narrative from late May into early June was that economic lockdowns weren’t going to be reinstated even if a 2nd wave hits in the fall. Plus, the bulls say we will be able to treat the virus better during the potential 2nd wave. The bulls point to the decline in deaths in America which is real. The bullish thesis evolved from early April to early June. It had to become more aggressive to justify the higher valuations. The big problem with the bullish thesis is new cases aren’t falling. The country has seen a flatline in new cases as states like New York and New Jersey have improved dramatically, while states like Arizona, Florida, Texas, and California are in worse shape than ever. Even if the death rate falls and states don’t issue shutdowns again, their economic activity will be suppressed.

The new bearish thesis is that COVID-19 caused the economic weakness, not the lockdowns. That means the government can’t choose between having a weak economy or people getting sick. The economy will be weak no matter what the government decides. The chart below shows job postings and unemployment claims based on state policy.

The darkest lines are the states that issued stay at home orders by March 22nd. The next darkest line includes states with orders from March 23rd to March 30th. The lightest line includes states with orders from March 31st and later. The dotted line includes states that never issued stay at home orders. Those states include Nebraska, Arkansas, Iowa, North Dakota, and South Dakota. As you can see, all states had a similar decline in job postings and a similar increase in unemployment claims. This indicates shutdown decisions aren’t as impactful on the economy.

There’s likely a correlation between early shutdowns and the severity of the outbreak, meaning the worse the outbreak was in a state, the earlier the shutdown. New York was hit the worst and had an early shutdown. That makes the bearish thesis more powerful because even though the states that weren’t shutdown as quickly or at all didn’t get hit hard by the virus, their labor markets still weakened almost as much as the states that were hit the hardest and had early shutdowns.

Consumer sentiment improved again in the preliminary June reading. As you can see from the chart below, the sentiment index is actually high for a recession. This level is consistent with an economy either just entering or exiting a recession. With the economic data improving, it’s clearly not entering one. The worry in this situation is a double dip decline in activity if the virus gets worse.

Specifically, the University of Michigan index rose from 72.3 to 78.9 which is still down 19.7% yearly. The stock market could have helped sentiment, but it was likely up mostly because of the economic reopening. Most people care more about their job and ability to live normally than the stock market. The current conditions index rose from 82.3 to 87.8 which was a 21.5% yearly decline. Expectations rose from 65.9 to 73.1 which was an 18.1% decline yearly. The gains occurred because of improved outlooks for personal finances and the economy. Amazingly, more consumers expected a decline in the jobless rate than at any point in the history of this survey. The bad news is 2/3rds of consumers still expect bad times ahead because of persistently high unemployment. Almost half of consumers expected a renewed downturn because of COVID-19 coming back.

Even though the Redbook same store sales growth reading was a disaster in the first week of June, the Chase consumer card spending growth index improved. This is the 7 day average of growth in total nonrecurring spending categories. As you can see in the chart below, growth improved from -17.9% to -16.6%. It’s good that growth stopped stalling out because that’s not a good place to end the uptrend. That would be like a car stalling out halfway up a hill.

The jobless claims report in the week of June 6th was very good on a rate of change basis. We’re still way above the previous record high before this recession, but the improvement was fantastic. As you can see, initial claims fell from 1.9 million to 1.5 million which equates to an 18.7% decline. That’s the biggest weekly decline since the week of April 11th, when initial claims were more than triple where they are now which means they had more room to fall. Continuing claims fell from 21.3 million to 20.9 million. We will be laser focused on this reading not this coming week, but the next one because that’s the BLS monthly survey week. The next initial claims reading this Thursday is the survey week.

The bearish thesis is if another wave of COVID-19 hits, it won’t matter if states don’t shutdown. The labor market will still weaken. We are seeing a renewed decline in stocks because of this perspective and because the GOP is threatening to not extend the $600 weekly unemployment benefits. Their argument is getting paid not to work encourages people to stay unemployed. It does, but if there aren’t jobs available, incentives don’t matter. Instead the extra income helps people cope with the recession. Consumer confidence improved again as did spending growth on Chase cards. The recent jobless claims report was very good because initial claims fell sharply.