Monthly Labor Report Should Be Strong 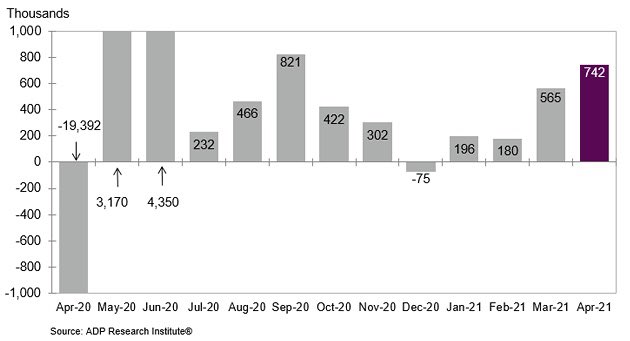 Job creation was similar in each size category. Small firms added 235,000 jobs; mid-sized firms added 230,000 jobs; and large firms added 277,000 jobs. There were 106,000 goods producing jobs added, with 55,000 coming from manufacturing. That’s strong in spite of the decline in the ISM employment index. Construction added 41,000 jobs. This is an extremely hot housing market. That area of the labor market is headed towards a shortage.

People formerly in the leisure and hospitality industry won’t want to switch careers now that the industry is finally picking up. The industry added 237,000 jobs according to the ADP reading. The 2nd best was trade, transportation, and utilities which added 155,000 jobs. Warehouse job creation is still strong. Online retail penetration has maintained its 2020 gains.

Another Solid ISM PMI With A Small Decline

The April ISM services PMI was similar to the manufacturing PMI in that the PMI fell from March, but was still very strong. The PMI fell from 63.7 to 62.7 which is the equivalent of 4.7% GDP growth. The activity index fell sharper. It was down 6.7 points to 62.7. The new orders index fell 4 points to 63.2. On the bright side, the employment index was up 1.6 points to 58.8 which supports the impending strong BLS report on Friday. Just like the manufacturing reading and basically every economic indicator, the prices index was up 2.8 points to 76.8.

As you can see from the chart below, just like the manufacturing reading, this was the hottest prices index since July 2008. Inflation is ramping sharply despite what the 10 year yield shows. We have seen a sector rotation in equities into cyclical stocks away from secular growth stocks based on these readings.

Just like in the manufacturing reading, almost all commodities were up in price and all were in short supply. A construction firm stated, “Consistent with the past year, labor continues to be the biggest issue we are facing. Finding and retaining labor — skilled and unskilled — is highly challenging and frustrating. As the challenges continue, we are not accepting all the work that we could if we had the labor.” As we mentioned, this industry is already headed for a labor shortage even though the recovery is just 1 year old.

The Markit services PMI spiked to a new record high exactly like the manufacturing PMI. As you can see from the chart below, it rose from 60.4 to 64.7 which was the best reading since the survey started in late 2009. This was up from the flash reading of 63.1; this shows the economy gained steam throughout the month. Once again, inflation ran rampant. Input cost pressures were the strongest on record (since October 2009). Companies specifically mentioned the rise in the cost of plastic, packaging, PPE, and fuel. If they are worried about fuel now, they will panic in a few months because fuel prices are heading higher. WTI is currently at $65.

The Fed still has no intention of raising rates. The market is certainly pressuring them to do so. As you can see from the chart below, the Bloomberg Commodities index was the highest since 2011. The momentum reading is very hot. However, keep in mind these aren’t stocks. When stocks get overheated, they fall on profit taking. This is different. Momentum is being caused by end market demand. Prices can increase even further. Of course, in the intermediate term, supply will overwhelm demand. We just aren’t there yet.

The US housing market is extremely overheated, but prices have shown no signs of cooling off. The chart below shows the states with the strongest improvement in their home prices in March on a year over year basis. Americans are moving west. The strongest states were Idaho, Montana, Arizona, and Utah. Technically, they are also moving east because many are fleeing California to the less populated western states.

The Financial Times reported that China had its first population decline since 1949 in 2020. However, it doesn’t matter much which year the decline starts. It is coming regardless. Some suggest it will start in 2022. China’s decision to end the one child policy has not ended the decline in births. The current projection is for 15 million births in China in 2020. There are about 10 million deaths per year.

As you can see from the chart above, India is about to overtake China as the largest county in the world. Nigeria is about to overtake America’s population in 20 years. The correlation can’t be clearer. As living standards improve, people have fewer children. Ironically, China’s strong economic growth, which lifted the country out of poverty, is a contributor for the population decline.

The ADP report was strong. We could easily see over 1 million jobs added in April. The labor market is actually tight in a few areas of the economy. In the areas it is loose, there will be a lot of jobs added this summer (travel). The ISM services PMI fell slightly and the Markit PMI rose. Both showed intense inflation pressure. The commodity price index hit a 10 year high. Home prices are exploding in the less populated western states. China may or may not have seen its population decline in 2020. Either way, a peak is likely in the next few years.