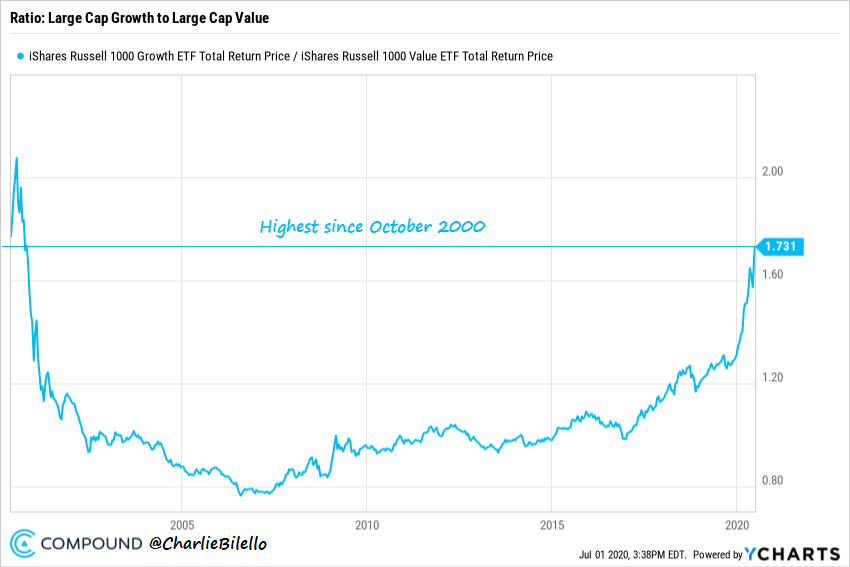 There is extreme investor herding into the stocks least hurt (or even helped) by COVID-19. The CLOU cloud industry ETF is up 74% from its bottom in March. Bubbles are created when there is a toxic mixture of herding, a strong story, and chasing performance. As you can see from the chart below, the Russell 1000 growth ETF has been trouncing the Russell 1000 value ETF. The ratio between the two is the highest since October 2000. This signals we are nearing 1990s tech bubble levels. The bulls like to point to the enormous rally in tech in the past 10 years as reason to think it will continue. The differences between 5 years ago and now are that valuations and expectations are much higher.

The thesis is COVID-19 is accelerating long term trends which won’t go back to normal once this pandemic is over. While it’s true these trends were accelerated, traders are now using that story to pay any price for these stocks. Generally, the explosive returns are in cloud stocks, but we’ve also seen them in Tesla stock. Electric car sales, particularly Tesla, have seen rapid adoption and market share gains during this pandemic. Speculators now think the gains are here to stay despite the fact that the shares gains were when sales were depressed.

The top chart below shows Tesla has a higher market cap than Toyota. The bottom chart shows Square, Spotify, Shopify, Tesla, and Zoom have the same market cap (combined) as Berkshire Hathaway even though Berkshire’s trailing net income is 297 times higher.

The stories the growth stocks have are very strong and backed by data. For example, spending on the cloud in which businesses are digitally transformed is a trend that’s strong now and will last for years. There needs to be a good story for valuations to get extreme. It needs to be simple, capture the imagination, and true. The tech bubble in the late 1990s was based on the notion that computers and the internet would change our lives. This story was accurate, but the bubble burst because of the spike in valuations and herding. Once performance stops being good and people want out, parabolic trends reverse course.

Competition Is Being Ignored

The tech rally is being supported by low rates and low inflation. Investors have portfolios exclusively in tech which is a signal in itself. Unfortunately, these speculators are too brazen to recognize their own euphoria. If you made triple digits this year, you got paid to ignore valuations. Everyone thinks they are smart enough to get out ahead of time. It’s nonsensical to have a portfolio with cloud companies that all compete with each other. If this business is so good, competition will explode which will crimp margins.

As an aside, there has been a curious increase in SPACswith the two most prominent ones being Tortoise and Nikola. They are both involved in electric trucking which is a hot area in the market. Any industry which is thought of as the future is seeing its stocks spike regardless of the fundamentals and the time it will take to achieve the lofty goals.

A SPAC is a special purpose acquisition company or a blank check company. Firms that have already gone public with cash and no business, buy private companies to make it easier for them to become public (lower costs and reporting needs). This isn’t a new concept. It’s becoming more common now because savvy investors are trying to take advantage of mostly retail investor greed. Traders are demanding story stocks and Wall Street is happily delivering them.

Valuations determine if your investments will be successful once the hype in the market is gone. As you can see from the chart below, the equity value weighted enterprise value to future year sales multiple for all public SaaS companies has spiked to 22.1 which is a new 5 year high. This industry has changed dramatically in the past 5 years which means data going back 10 years isn’t a direct comparison.

The average equity value weighted multiple in the past 5 years is 9.8. These stocks are twice as expensive as usual. Whenever a bull tells you these stocks were considered expensive a few years ago (which supposedly justifies their current value), show them this chart. These stocks were much more reasonably valued in 2016. That relatively low valuation was the initial fuel for this long term rally.

The Stocks Left Behind

In a DataTrek survey of 341 investors, 52% of readers said tech would be the best large cap sector for the rest of the year. Utilities, industrials, real estate, and materials received a combined 6% of the vote. The S&P 500 tech sector has increased 12% this year, while the utilities are down 4.2%. As you can see from the chart below, about 0% of utilities stocks are above their 200 day moving average. The percentage was previously nearly this low in January 2018 which was right before the short VIX trade exploded because of euphoria. That caused a correction in the overall market.

The momentum growth stocks have gotten modestly more expensive than the last time we discussed them. This isn’t surprising because euphoria usually lasts longer than anyone anticipates. The last explosive action is what makes a bubble. This spike in these story stocks correlates with the increase in retail trader participation. The more value stocks under perform the market, the higher likelihood the bubble is close to its fruition. Investors are herding into a few ideas because they are chasing performance. It seems very easy; these stocks are doing so well, you can make a year’s worth of gains in a week, so people think. Speculators think they will be able to get out when the tide turns, but many won’t be able to. A lot of money will be lost when this turns.