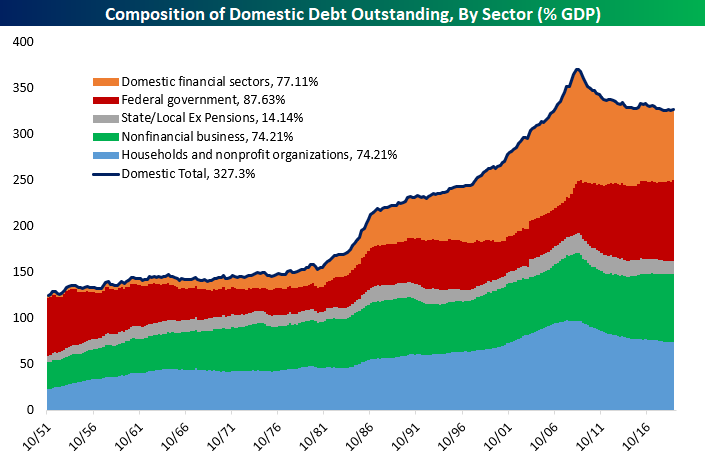 Most onlookers see this as an unusual cycle at face value because annualized GDP growth has been low and this expansion is over 10 years long. In this article, we will discuss the cycle in terms of profits, margins, and debt. It’s safe to say viewers are correct; this is an unusual cycle. As you can see from the chart below, corporate profit margins have been declining for 4.5 years. That’s the longest decline since WWII.

BlackRock labeled the current economy late cycle based on this decline in margins. According to Oxford Economics, since the 1960s NIPA margins peaked 4, 1, 1, 2, 3.5, and 1 year before recessions. To be fair, margins started at a relatively high level. They haven’t yet fallen to the average trough seen in the past 7 recessions.

It makes sense to see margins fall when wages are high. Firms are still hiring workers despite margin declines because demand is high. We’ve seen business investment fall in the past 2 quarters which should hurt worker productivity. That’s a problem since wages are elevated. If productivity growth is weak and wage growth is high, unit labor costs will increase. As you can see from the bottom chart below, the S&P 500 has outperformed overall U.S. profits.

According to Goldman current NIPA margins (corporate profits divided by gross output) are below 6% and have fallen from about 6.5%, while S&P 500 operating margins are 11% which is the highest ever, going back until the 1960s. Clearly, Goldman’s calculation is different from BlackRock’s, but the theme is the same. For most firms, margins have fallen, but for the S&P 500 they are near their peak. FactSet shows margins have fallen slightly in 2019 as Q3 2019 margins were 11.5% compared to 12.1% the previous year. That’s still high though.

Interestingly, Goldman doesn’t expect S&P 500 margins to follow NIPA margins lower. In 2020 it forecasts a slight increase in margins. That would be unlike previous pre-recessionary periods. Employment cost growth probably won’t fall considerably unless the economy weakens, but business might improve internationally with the global economy starting to turn around. It’s confounding that despite this decline in margins for all other firms, small business confidence is very high. To boot, just 9% of small firms stated competition from large businesses was their biggest issue. However, the struggle with finding qualified workers is in line with margin declines.

This expansion is unique because it was a complete turn in the long term debt cycle. Consumers deleveraged throughout the expansion. That’s what happens when the largest debt on their balance sheet (housing) blows up. Mortgage debt isn’t at a new record high yet. It’s not even close if you adjust for GDP. Bearish investors point to auto loans and student loans. However, consider that despite their already elevated delinquency rates, consumer sentiment is extremely high and spending growth is solid. There needs to be weakness in the labor market to knock down confidence, but even if that occurs, consumers won’t be in as much trouble as last cycle because they have deleveraged.

This deleveraging explains why growth has been so low this expansion and why it has lasted so long. Even if you include all the debt in the economy such as government and business debt, there has still been a deleveraging. The chart below shows the decline as a percentage of GDP. It shows no sign of increasing even after a 10 year expansion.

Business debt just surpassed consumer debt for the first time since 1991. It’s best not to use that ratio as a reason to believe in a corporate debt bubble because consumers have gotten financially healthier compared to the last cycle.

In a previous article, we mentioned that the rally in stocks this year makes multiple expansion unlikely in 2020. It’s wrong to act as if stocks haven’t rallied and then assume they will increase with the economy. Stocks and the economy aren’t always on the same page. You need to assess the situation dynamically. Look at what is priced in! To support the point that stocks aren’t always perfectly aligned with the economy, the chart below shows the timing of bear markets and recessions.

The chart on the left shows the Cornerstone Macro estimate for S&P 500 operating EPS growth.

The model is correlated with actual results. It predicts 5.6% growth by Q4 2020. In all of 2020, FactSet shows analysts see 5.5% growth, but that estimate will fall and then earnings will beat estimates. It’s far from fact. Cornerstone Macro predicts the dollar and the global economy will be catalysts for this improvement in EPS growth. US policy might not be a drag since phase 1 of the trade deal was just announced. That can also help global growth.

Finally, we have The Earnings Scout estimates for earnings growth in the next 4 quarters. There have been a couple firms to report Q4 earnings, but the majority will come out in a month. As you can see, even though the stock market has priced in an economic growth acceleration in 1H 2020, the consensus only sees 4.09% and 5.46% earnings growth in Q1 and Q2. Those estimates aren’t even done falling yet if they follow normal trends.

We’ve seen NIPA profit margins fall. Usually, this precedes recessions, but not in this case. Goldman sees S&P 500 earnings improving slightly after they fell in 2019 according to FactSet. The consumer has stayed strong this cycle because the labor market is full, inflation is low, the stock market has rallied, and they aren’t overly indebted like last cycle. Even though stocks have priced in an economic recovery next year, earnings estimates aren’t overly enthusiastic. It’s not great for stocks to price in good results before they occur because it means multiples don’t have room to expand. On the other hand, if investors are correct about the turnaround, EPS estimates might be too low.