Less People Have Received Their Unemployment Checks So Far 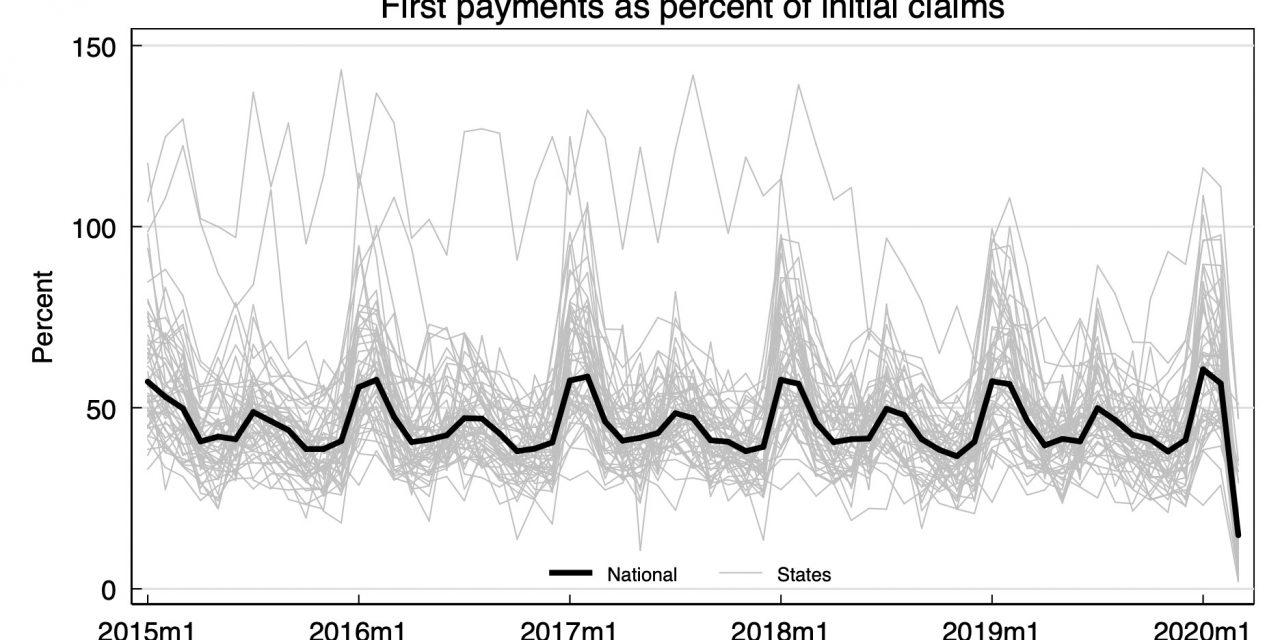 It’s almost impossible to overstate the impact COVID-19 is having on the labor market. Virtually every job has been impacted. Some people (think professional business) are actually working longer hours from home if they have a job that allows them to work from home. That might be because of the time saved from not commuting. However, that’s not the case for people who can’t work from home. The average weekly workweek in March fell from 34.4 to 34.2 hours. The length of the workweek falls during recessions, rises during the beginning of expansions, and stays steady throughout expansions. The length in March was the shortest since January 2011. We expect it to fall again in April. The trough in the last recession was 33.7 hours.

Workers are claiming unemployment benefits via reduced hours programs. As you can see from the chart below, the number of people in these programs recently doubled from below 12,500 to over 25,000. These workshares let workers collect prorated unemployment benefits to offset the reduced hours worked. This along with giving gig workers benefits have been huge lifesavers for workers.

The situation is far from perfect, however, as most people haven’t gotten their unemployment checks yet. That’s devastating for people living paycheck to paycheck. The chart below shows 14.8% of people who filed unemployment have gotten their first check in March. That’s compared to 46.4% last March.

Let’s wait to see the April data to determine if the system is backed up or if the huge swath of people at the end of the month that applied for benefits were right on schedule, but just didn’t get the money yet. We know Florida has been in trouble as its website had problems causing people to stand in line to hand in their paper forms. That’s the worst case scenario as people risked catching coronavirus to have enough money to live while unemployed.

As we mentioned, the new trend this spring is a suspension of buybacks, guidance, and companies borrowing from their revolving lines of credit for excess liquidity. As you can see from the chart below, 87.83% of the firms that reported earnings in the past 4 weeks did not give guidance.

In a way the lack of certainty has fortified the bulls’ stance that we should ignore this one time factor. The fact that this narrative of ignoring the bad results has become commonplace could be a sell signal. We won’t be ignoring the data. We will be following it closely.

As always firms are beating estimates. Firms will always beat estimates because they are lowered so they can be beaten. Maybe with the lack of guidance, firms will miss estimates in Q2. On the other hand, maybe estimates will fall so low, they can’t be missed. The current S&P 500 EPS estimates are for a 12.37% decline in Q1 and a 24.76% decline in Q2. We think it’s clear the estimate for losses in Q2 was a farce. The claim was based on a top down estimate without detailed research. Bottoms up estimates use actual data and company estimates, while top down estimates can be based on anything.

To be clear, Q2 estimates will fall very sharply in the next 2-3 weeks. However, they won’t show anywhere close to -100% EPS growth. You have to realize, consumer staples, utilities, communication services, technology, and healthcare will all make money. The other sectors would need to have massive losses to make up for that. Of the first 54 firms to report results, 69% beat EPS estimates on -12.3% growth and 72% beat sales estimates on 3% growth. Guidance is usually how investors react to earnings reports. Now we won’t have that. Actually, listening to the Q&A section of conference calls will be critical.

Not Getting A Small Business Loan

The fund for small business loans ran out of money on April 16th after just 13 days. The $349 billion Paycheck Protection Program was too small. The next round of funding needs to be large because it has a burn rate of $50 billion per day. Hopefully, it is close to $1 trillion, for the sake of all the small businesses. The time to help small firms is now because they won’t be able to reopen in a few months when the virus ends if they go bankrupt. If they survive this crisis, the economy can rebound more quickly.

One of the scary aspects of this situation is some small businesses aren’t applying for the government loans. The chart below shows 10% don’t think they will receive the money in time and almost 15% think COVID-19 will last too long to repay the loan. The loans transition into grants, but many small firms have doubts about that. Over 10% don’t trust the bank to forgive the loan and almost 20% don’t trust the government to forgive the loan.

The impact social distancing and shutdowns are having on the labor market can’t be overstated as we mentioned earlier. As you can see from the chart in the bottom left, 20% of payroll jobs will be impacted from social distancing such as restaurants and bars as well as entertainment and tourism.

The hope is there is some pent-up demand for this category as many people will want to go out to restaurants and entertainment venues after being stuck inside for weeks. Obviously, the situation needs to be done safely. The desire will likely be there; it’s more a matter of if consumers are in good enough financial shape to spend money because of the huge hit the labor market has taken.

Many people are getting prorated benefits because they are working less. Hopefully, the people who filed for claims are getting their money. We need to see the April report to confirm what’s going on. Very few companies are providing earnings guidance. The money for small business loans has run out, but it is being replenished. As much as $1 trillion may need to be added to the next package to have a sizable impact. Hopefully, small firms will gain trust in the process and utilize it. 20% of the labor market is impacted by social distancing. Demand for restaurants and entertainment among other categories will come back when the situation is safe and people’s finances are in order.