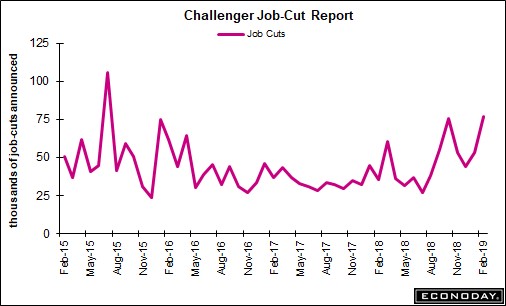 There is a lot of misinformation on buybacks because they have become a political football. They get the blame for low productivity growth and CEOs making a high amount of money in relation to their production and non-supervisory employees. We’ve even seen the outlandish claim that buybacks are corporations profiting off insider information even though firms announce buybacks before they execute them. Investors can buy stocks ahead of corporations.

Buybacks increased quickly in 2018 as they exceeded capex for the first time since 2007. If buybacks were so terrible for the everyday worker, how come real wage growth improved in the 2nd half of 2018? How come productivity improved in Q4? Stocks fell in 2018, so buybacks don’t guarantee stocks will move higher and form a bubble.

It’s not a surprise buybacks increased in 2018 because tax cuts provided firms an infusion of cash. Capex increased in 2018, but at a certain point businesses have no place to put the money so they dutifully return it to shareholders who invest it in other projects. It’s not a sign of bad management that a firm returns capital to shareholders. Investors usually would rather a mature firm give the money back instead of trying to make risky acquisitions, while taking on debt. If shareholders wanted to own a risky stock, they would buy one.

Even though buybacks increased in 2018 to above capex, buybacks aren’t out of control. As you can see from the table below, the buyback yield increased from 2.28% to 3.37% in 2018 which is only the highest yield since 2011.

Buybacks were higher as a percentage of income in 2007-2008 and 2015-2016. Those were years of earnings weakness. 2018 was an unusual year where income increased so much, firms needed to return the capital.

China really needs a trade deal with America because its economy is slumping. The government expects GDP growth between 6% and 6.5% in 2019 which would be below 2018’s growth of 6.6%. China’s population growth is a long term issue. Capital Economics believes the labor force population weakness will trim 0.5% off GDP growth by 2030. 15 million babies were born in 2018 which was a 12% decline from 2017. That signals citizens don’t think the economy is strong enough to have kids. Births are falling despite China lifting its 1 child policy in 2015, allowing couples to have 2 kids. Low population growth limits long term growth.

The latest news from China is trade was terrible in February. Exports fell 20.7% which missed estimates for a 4.8% decline. Exports were up 9.8% in January. China needs to raise worker productivity by opening itself to new technologies. Instead it’s seeing export weakness without becoming more open. One caveat to this report is the Chinese New Year was in February. However, economists knew that when they made their forecasts which were missed dramatically.

Imports were down 5.2% yearly which missed estimates for a 1.4% decline and January’s 1.5% decline. As you can see in the table below, car sales are plummeting in China. Total passenger vehicle sales from the same OEMs fell 11.1% year over year and 34.1% monthly.

However, the main catalyst for wage growth is cyclical improvement. The tight labor market is pushing up wages. If a minimum wage increase prevents some people from getting jobs, it’s not as big of a deal in a tight labor market because there are so many jobs available. Wages are increasing naturally regardless of minimum wage laws. This chart doesn’t prove the minimum wage is a positive policy because it doesn’t show the workers who couldn’t get jobs because they didn’t have enough skill to be worth the minimum wage. As we mentioned, the cyclical improvement minimizes the number of people in this category as employers are willing to have more job training and lower standards in a tight labor market.

Costco’s latest earnings report supports the notion that slack in the labor market is tight as the firm announced it will raise starting wages in America and Canada to $15 and $15.5 an hour from $14 and $14.5. These wage hikes and wage hikes for supervisors will add 3-4 basis points to SG&A expenses.

The quarter average increased from 57,534 to 64,912 (only first 2 months of Q1 included). This is a leading indicator for jobless claims. Therefore, while claims are very low now, they could increase in Q2.

There’s not much for American workers and firms to complain about as jobless claims are low, real wage growth has increased, and profits have increased which has boosted the amount of capital returned to shareholders. The one bad news item is job cuts increased. China isn’t in great shape as exports plummeted. China is an export driven economy that is trying to rely more on services like other developed countries. To grow GDP per capita, China needs to improve worker productivity instead of being the place for the cheapest labor.