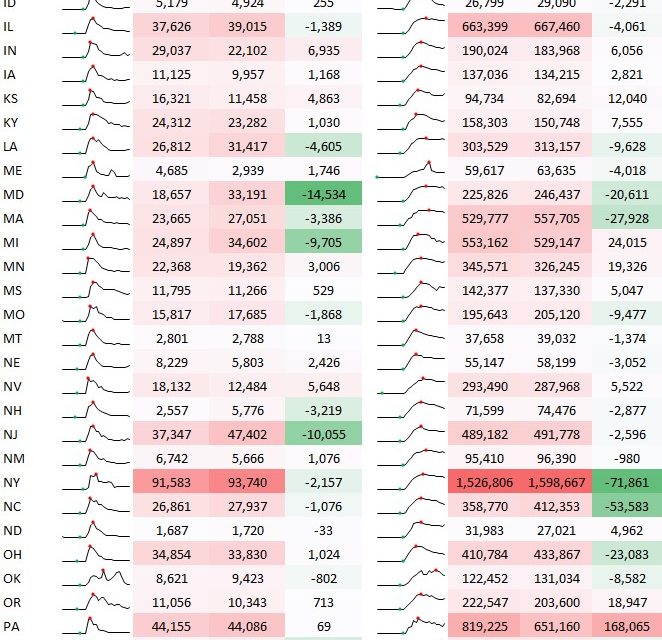 With the recent labor market slowdown in the past few weeks, the economy has come precariously close at times to ending the streak of declines in initial unemployment claims. Technically, if you look at unadjusted claims, they were up in the week of July 11th. Either way, the labor market improvement has stagnated due to COVID-19 coming back with a vengeance. On Thursday, the number of new cases hit a record high. The good news is the 7 day average of new cases in Arizona is falling. That state was the first to see a spike in cases in this 2nd wave which potentially means the other hotspots will see improvement as well.

Seasonally adjusted initial jobless claims only fell from 1.31 million to 1.3 million. This 0.8% decline was the lowest of this streak of declines. The labor market is probably getting worse. It’s only a matter of time before the seasonally adjusted reading increases. If that ends up being next week, that would be bad timing because that’s the July BLS reference week. It’s highly likely that this will be a very weak monthly labor report.

The GOP won’t like the headlines as it will hurt their election chances. They have proudly promoted the strong job creation in May and June. Hopefully, there is a stimulus before the first Friday of August, but if there isn’t, this report will motivate politicians to get something done quickly. There probably would have been a stimulus anyway, but there definitely needs to be one because of this spike in cases which has caused added restrictions in the west and the south. As you know, the $600 in weekly unemployment insurance money will go away on July 25th. Something needs to be done to help consumers because they face a massive decline in income as they won’t suddenly get their jobs back when this program ends.

The labor market isn’t uniform throughout the country as states are facing various threats from COVID-19 and restrictions. The table above shows the weekly change in initial claims in each state on an unadjusted basis. Unadjusted national claims were up 108,811 to 1.5 million. The best state was Maryland which saw a 14,534 decline in claims to 18,657. Even though Texas is facing the worst of COVID-19, it had an 11,509 decline in claims. The worst states were Florida, Georgia, and California which all are dealing with the worst of COVID-19. Florida had a 62,467 increase in initial claims to 129,408. This was the largest increase in 12 weeks. Kansas had its largest increase in 15 weeks.

The best part of this jobless claims report was the 118,000 decline in PUAs. That means on an unadjusted basis, initial claims were stagnant at 2.4 million. In the past 5 weekly reports, the best reading has been a 1% decline. In other words, there has been no improvement in 5 weeks. The situation will likely get worse before it gets better. Seasonally adjusted continued claims were down from 17.76 million to 17.338 million, but on a non-seasonally adjusted basis, they rose 838,307 to 17.355 million. Since continued claims peaked in March, this is only the 2nd increase; it’s also the largest increase. This is a very bad spot for the labor market to stop increasing as the unemployment rate is higher than the peak of the last recession.

Going Back To Work

In a survey from July 6th to the 12th, 40.3% of people who lost their jobs because of the pandemic said they are already back at work. 12.8% expect to get back to work soon. 15.9% and 28.5% expect to return eventually or don’t expect to return at all. This is a do or die moment which means in the next few weeks people will ether get their jobs back or permanently lose their job. We expect to see a large increase in permanent job losses in the July BLS report. If jobs are lost in July, the permanent job losses figure will be the most discussed part of the reading.

Consumer sentiment has been weakening, but the June retail sales report was still very strong and beat estimates. That’s because the weakness was towards the end of the month and into July. Monthly headline retail sales growth was 7.5% which beat estimates for 5.2%. That’s impressive given the 18.2% growth comp. Given the recent weakness and the tough comp coming up, it wouldn’t be a surprise to see negative monthly sales growth in July. Retail sales ex-gas stations were 0.7% above January’s level. The chart below shows the new high nearly got sales back to the long term trend. Headline yearly growth was 1.1%. Amazingly, yearly control group growth was 6.3%.

This old June retail sales data was all about the country reopening. Too bad the trends reversed since this data was measured. As the chart below shows, monthly sales growth in clothing and accessories was 105%. Since June 16th, TJX’s stock is down 3.7% as the market knows this trend didn’t continue. Online sales actually fell 2.4% monthly as people left the house more. Restaurant and bar sales were up 20%, but now places such as California are restricting indoor eating at restaurants. Motor vehicle and parts sales is the biggest category representing 21% of total retail sales. It had 8.3% monthly growth and 7.5% yearly growth. This expansion is due to people wanting their own cars to avoid public transportation as COVID-19 is transmitted easily on public transportation. That fear could even extend to ride hailing services.

The jobless claims report in the week of July 11th was terrible. It’s almost inevitable that the July BLS report will be bad. A fiscal stimulus needs to be passed to save the consumer from an income crash. People hope to get their jobs back, but many won’t if the number of new COVID-19 cases continues to rise. Arizona data suggests new cases will start falling again soon. Consumer sentiment has since weakened from the record setting June retail sales report. Official data continues to lag the trend changes heavily.