Job Losses Are Back 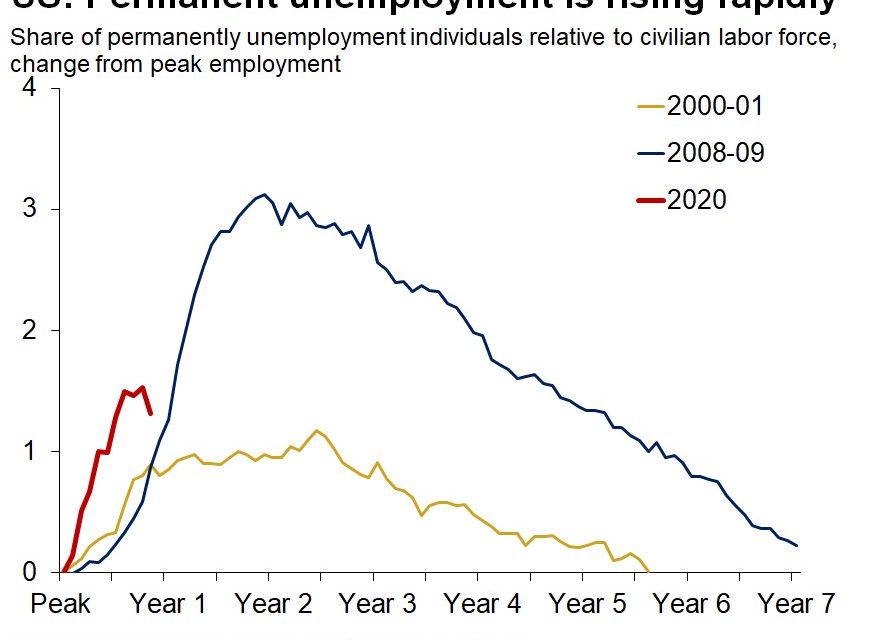 We saw this negative jobs print from a mile away. It became clear a few weeks ago that the economy would lose jobs in December because the pandemic was shutting down businesses again. The good news is these job losses were temporary losses directly related to the shutdown rather than general economic weakness. That’s why our expectation for losses was so straightforward. If a restaurant is forced to close, the jobs will be gone. There’s not much of a prediction there.

The good news is November’s report was revised higher from 245,000 jobs created to 336,000 jobs created. That weak report hinted we might see losses in December if the trend continued. As you can see from the chart above, way before the economy regained the jobs it lost, there were losses again. The economy lost 140,000 jobs in December which missed estimates for a 50,000 gain and the lowest estimate which was a 50,000 loss.

We usually say the economy losing less/gaining more private sector jobs than overall jobs is a win, but in this case the government has been a real laggard which is worrisome. Making matters worse, the $900 billion stimulus won’t help state and local budgets. We need to wait until the next stimulus for that to happen. Specifically, there were 95,000 private sector job losses which missed estimates for a 90,000 gain.

Economists expected the government to lose 40,000 jobs and it lost 45,000. Local government excluding education lost 32,000 jobs and state government education lost 20,000 jobs. As you can see from the chart above, state government has been losing jobs for 4 straight months. This is a serious problem that needs to be amended through stimulus. Since the Dems won the Senate, we expect the next stimulus to include help for state and local governments. We just don’t know when that will come and how much help it will bring.

The elephant in the room is obviously the leisure and hospitality industry which lost 498,000 jobs. Food services and drinking places lost 372,000 jobs; amusements, gambling, and recreation lost 92,000 jobs; and accommodation lost 24,000 jobs. Leisure and hospitality is down 3.9 million jobs since February. They will come back quickly this spring/summer. If it wasn’t for this industry, there would have been a gain of 358,000 jobs which would have been a solid reading.

We think the January labor report will also be weak and might also show job losses. However, there will definitely be a recovery this spring. So far, there have been 8.02 million vaccine doses given out in America. That’s 2.4 doses for every 100 people. We are few weeks from hospitalizations peaking. It will be interesting to see what changes when Biden is sworn in. The pace is good, but we can always go quicker.

It’s no surprise manufacturing had strong job creation, rising 3,000 to 38,000. The manufacturing sector is improving rapidly based on the ISM readings. We are very interested to see how that translates into the industrial production report. The strongest job creation came from professional and business services which added 161,000 jobs. These are well paid, so they are important. Within the industry, temporary help services added 68,000 jobs, consumer systems design added 20,000 jobs, and professional and technical services added 11,000 jobs. The industry is down 858,000 jobs since before the recession.

The unemployment rate stayed at 6.7% which was 0.1% below estimates. Even though this rate is less than 3 points from full employment, millions of people aren’t in the labor force. The recovery isn’t close to good enough. The leisure and hospitality industry is in a depression. The U6 underemployment rate fell from 12% to 11.7% which is 4.7% above where it was before the recession. The labor force participation rate stayed at 61.5%.

As you can see from the chart below, the prime age employment to population rate rose from 76% to 76.3% which is a great sign. It was 80.4% before the recession. If it were to increase 3 tenths per month, it would take 13.7 months to fully recover. That’s not bad.

Average hourly wage growth was way above estimates. Monthly growth was 0.8% which quadrupled estimates and rose from 0.3%. Yearly growth rose from 4.4% to 5.1% (4.1% was also the estimate). The workweek length fell from 34.8 to 34.7 which isn’t bad when you consider the massive pay increase. The pay raise was partially because of composition effects as professional and business jobs pay well, while leisure and hospitality jobs pay the least. Weekly earnings growth rose from 5.9% to 6.3%.

One of the most important aspects of the recovery has been measuring the number of permanent job losses because most of the job losses were temporary which implied a quick recovery. Millions of jobs have come back, but given the length of the fight with COVID-19 and the number of small businesses that have failed, the hole will been tougher to dig out of than initially hoped (last spring). That’s not to say there won’t be a liftoff event this spring when the economy reopens.

Even though this was a weak report, permanent losses actually fell. The losses were all temporary in the leisure and hospitality industry. Temporary losses were up for the first time since the recovery started as they increased from 2.762 million to 3.039 million. As you can see from the chart above, permanent losses fell sharply, making the title of the chart inaccurate. Specifically, they fell from 3.718 million to 3.37 million. It’s worth mentioning that regardless of where the jobs were lost, this report will motivate Congress to pass a stimulus. Congress might need this motivation because if a couple Democratic Senators disagree, the stimulus bill’s prospects can collapse.

Job losses are back, but this is only temporary. Job creation will come back in the spring. Plus, a stimulus is coming. The December report wasn’t as bad as the headlines looked because more than 100% of the losses were in leisure and hospitality. In fact, permanent job losses actually fell. That’s important because temporary losses coming back will help juice the recovery this spring. It’s possible the prime age employment to population ratio will fully recover by next year. The unemployment rate might end 2021 below 5%.