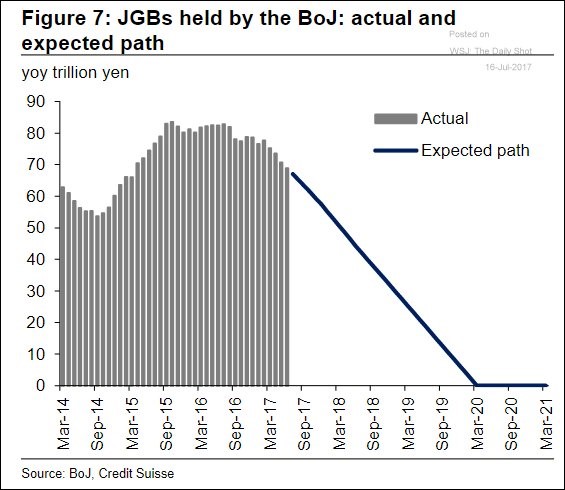 In the next 18 months, central banks will begin to peel back their expansionary policies to see what the underbelly of the economy looks like. It’s an interesting thought experiment to figure out what this trillions in asset buying did because in theory a reversal of the programs would do the opposite of what has occurred during the past 8 years.

The chart below gives us a glimpse of the expected policy by the BOJ (Bank of Japan). Credit Suisse has modeled that the BOJ will swiftly end its bond purchases in 2020 after years of buying them. That might be overzealous of them to project as central bankers have been addicted to quantitative easing, expanding their balance sheets to ‘save’ the economy. The Fed routinely puts out faulty guidance on what future policy will be.

Bonds Held By The Bank Of Japan

The asset purchases seem to have boosted stock prices as the Fed lays claim to bottoming the stock market in 2009. Richard Fisher, former president of the Dallas Fed said:

“What the Fed did, and I was part of it, was front-loaded an enormous market rally in order to create a wealth effect.”

That was an amazing admission because the Fed has been coy about saying it wants stocks to move higher. The reason it is coy is because if the Fed said its job was to push stocks higher, traders would expect action anytime there was a minor hiccup. The stock market currently is operating under the assumption that if anything really bad happens, the Fed will have its back. That’s a dangerous assumption as it is a moral hazard.

There’s a bit of a placebo effect to this entire situation because the Fed doesn’t even have to do anything now that the promise is implicit. The one problem with this entire notion is that there is no way of knowing what would have happened without quantitative easing. It’s dangerous that Fisher is giving the Fed credit for saving the stock market because that’s not the Fed’s role. Congressional oversight might take a very harsh look at the concept of the Federal Reserve trying to bailout rich investors on Wall Street while Main Street gets the bill. The Fed officials don’t have to run for office, but Congress does. This means the Congress will do anything it takes to sound like it’s acting in the best interests of the ‘little guy.’ That includes going after the Fed through an audit or ruling that it must use a rules based approach to monetary policy. President Trump has supported the audit the Fed bill, while Fed chairperson Janet Yellen has predictably opposed it.

Besides the fact that the Fed doesn’t have the authority to push stock prices higher unless there’s threats to financial stability, Fisher’s statement might also be wrong. He may be overplaying his hand. The stock market was cheap in 2009 as stocks fell over 50%. On the back of China’s stimulus, the economy looked to be emerging from crisis mode. The U.S. stock market bottomed in March 2009 and the recession ended in June. Therefore, it makes sense stocks rallied. The argument that QE helps economic growth doesn’t hold much water as GDP growth has been tepid this recovery despite expansive policy.

As you can see from the chart below, the Fed has also failed to achieve its target for 2% inflation for much of this recovery. 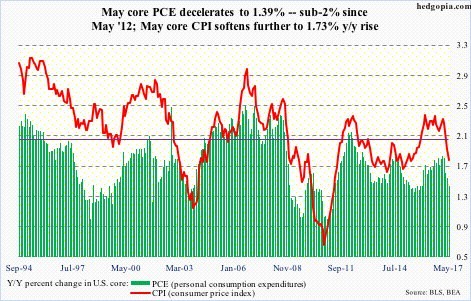 Inflation Measured In CPI and PCE

If the Fed can’t boost growth or inflation, then expecting it to act as a god by moving stock prices higher at every whim may be overconfidence. The Fed has cut rates during recessions, yet that doesn’t prevent them from occuring. Why is that? Maybe what the Federal Reserve does only leads to excess booms and busts, not just booms. Of course that is a rhetorical question, you can read more about the business cycle and how the Federal Reserve impacts it here. In fact, the Fed has a bad track record at predicting strife. These factors lead us to believe that buying stocks based on confidence in the Fed may be a mistake.

The chart below shows the survey results when Bank of America Merrill Lynch asked fund managers what they thought would happen when the Federal Reserve unwinds its balance sheet. 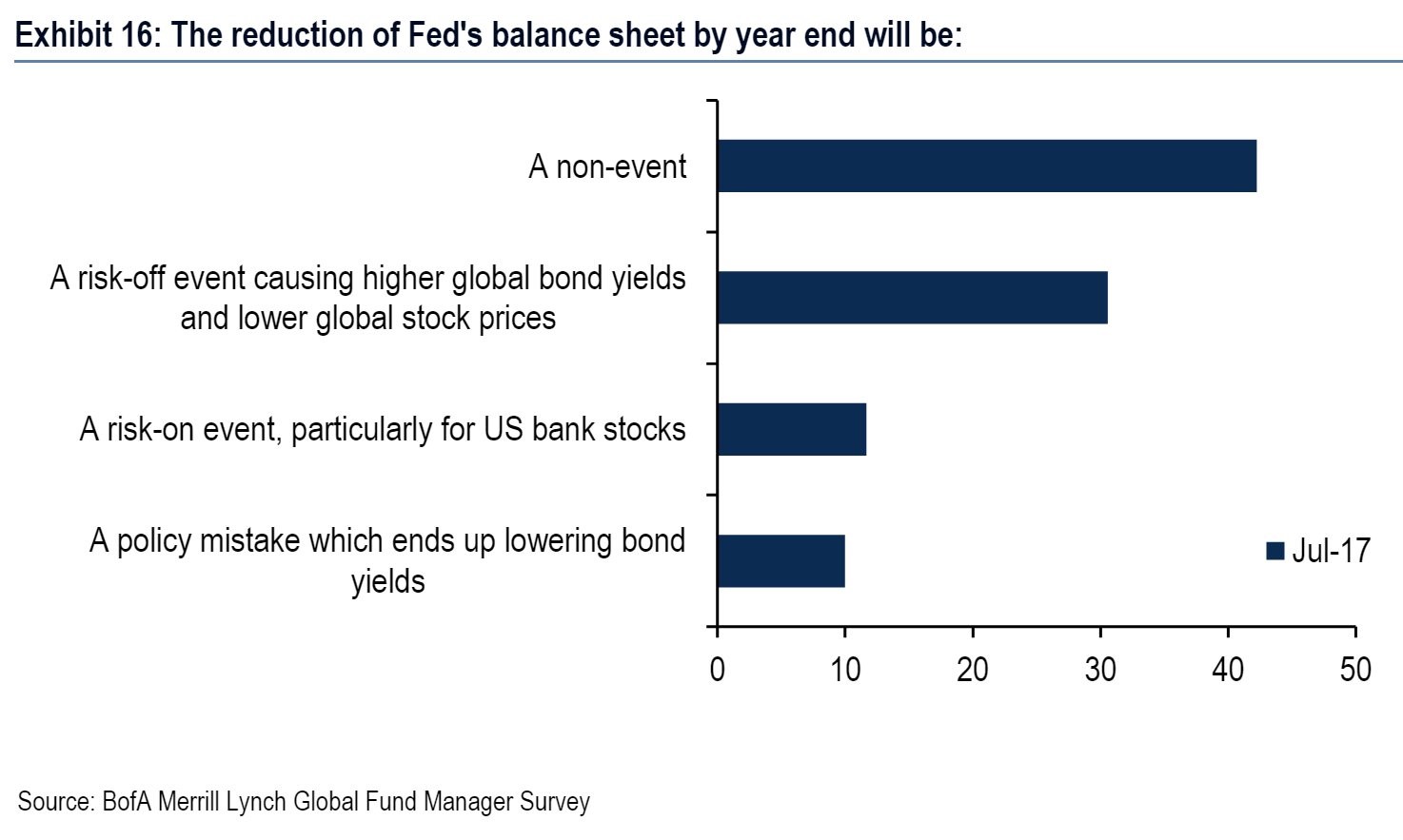 BAML Survey About What The Fed’s Unwind Will Do

As you can see, the majority believes the unwind will be a non-event. As with any survey, it’s important to study the wording. As you can tell, it’s only asking about the effects by the end of the year, not the whole unwind. Some managers don’t think the unwind will start this year. If you thought the unwind would cause a crisis, but figured it would start in 2018 or later, then you would say it’s going to be a non-event. It would literally be a non-event as it wouldn’t occur. Over 10% think this will be a risk-on event which boosts bank stocks. The split is about 55-45 if you add up the two negative responses and the two positive responses, with the positives winning out.

The next survey asks what is the biggest tail risk which basically means the biggest unforeseen risk that has the highest probability of occurring. The Fed and ECB making a policy mistake is the second most prominent answer on this chart meaning those who are worried about the unwind are very worried. 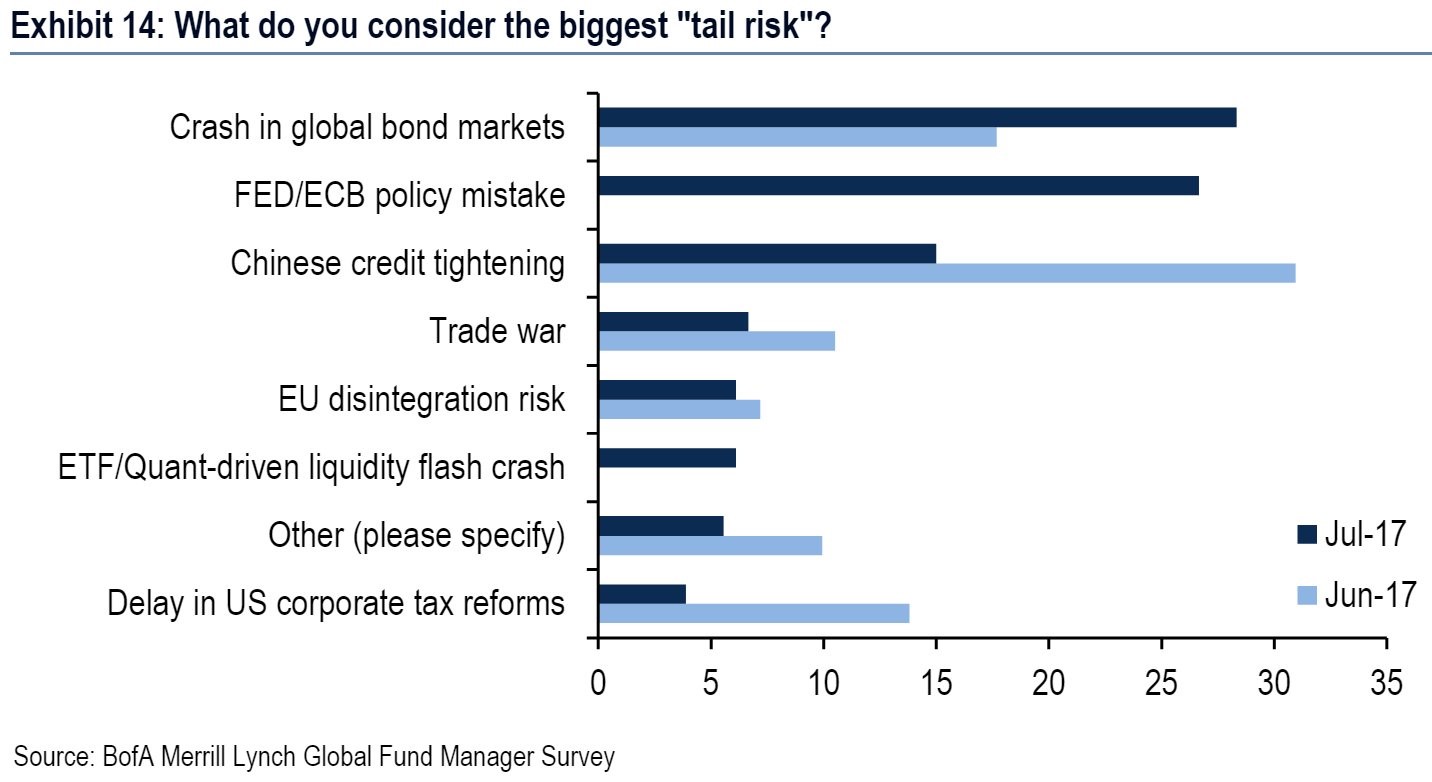 One issue to contemplate is the potential hypocritical points the bulls make. They have said to not fight the Fed throughout this rally. Now that the Fed is reversing its course, they say the Fed doesn’t matter and buy stocks anyway. They can’t have it both ways. Either the Fed pushed stocks higher and will now cause a crash by unwinding the balance sheet and raising rates or the Fed didn’t cause the rally and this unwind is a nothing burger. If that’s the case, the Fed can’t stop oncoming recessions or market corrections.

The balance sheet of the Fed is expected to decrease starting in Q4 2017; the JCB and the ECB will simultaneously slow their purchases. Many fund managers think this is a non-event which is worrisome because usually it’s the unexpected events which cause crises. If everyone anticipated events that caused crashes, there would be no crash. The point of this article, isn’t to claim that a crash is assuredly coming. Instead it’s to give you a clearer picture that the probability of the balance sheet unwind causing serious downside risk for bonds and stocks is growing as investors have gotten complacent after 8 years of stimulative policy.