Is The Entire Yield Curve Wrong? 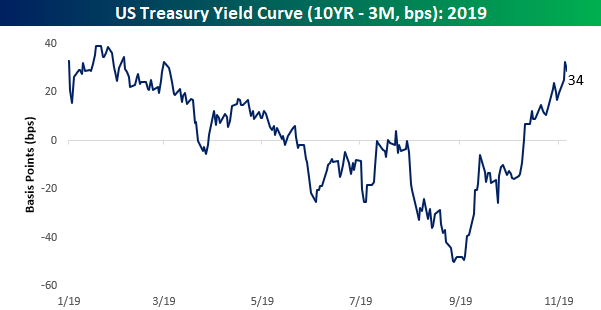 The yield curve is now normal again across all maturities. If it wasn’t for the way the curve inverted, this would be a recessionary warning. There was a major selloff in the long bond on Thursday as there was positive news on phase one of the trade deal. It could be signed in early December. We wouldn’t be discussing this action if it was just in one day though. The long bond has been selling off for a few weeks now as the 10 year yield bottomed at 1.46% in early September and recently hit 1.96%. The short end of the curve hasn’t increased as much because the Fed stated it would need to see a big spike in inflation to hike rates. That implies no rate hikes in 2020. The Fed has changed course before, but that’s what is limiting the short end of the curve now. As you can see from the chart below, the difference between the 10 year yield and the 3 month yield has increased from about -50 basis points to 34 basis points.

The big question is what the rise in the 10 year yield means. Traditionally, it predicts higher nominal GDP growth. There has been a rise in both the breakeven inflation rate and the TIPS rate, implying inflation and growth expectations have increased since September. This could be because investors see global growth improving or because of the potential trade deal. Global stock markets have been outperforming the US stock market recently, so there is definitely increased optimism on global growth. Keep in mind, the S&P 500 is at a record high, so outperforming that is significant.

On the one hand, the chart below shows the comps are easy and will stay easy for the next few weeks. On the other hand, it’s good to see growth in the face of rising rates.

With the big spike in long rates on Thursday, demand for housing could come under pressure. Rates are still much lower than they were last year and all housing stats will face easy comps this fall, but on a sequential basis we could see weakening demand. Higher rates are especially problematic at a time when consumers view housing as unaffordable.

Jobless Claims Are In A Historically Tight Range

The 10 year yield has been increasing which has been steepening the curve. The increase is due to higher real growth estimates and higher inflation estimates. In other words, nominal GDP growth is expected to rebound in 2020. There is very little evidence real growth will be strong in Q4 2019. The MBA purchase applications index improved, but demand might wane because of the rise in rates. Americans view housing as unaffordable which is why 20% more see it as a good time to sell than a good time to buy. Not only are jobless claims low, they haven’t been moving much at all. This is very far from recessionary as claims usually spike and are volatile in recessions.