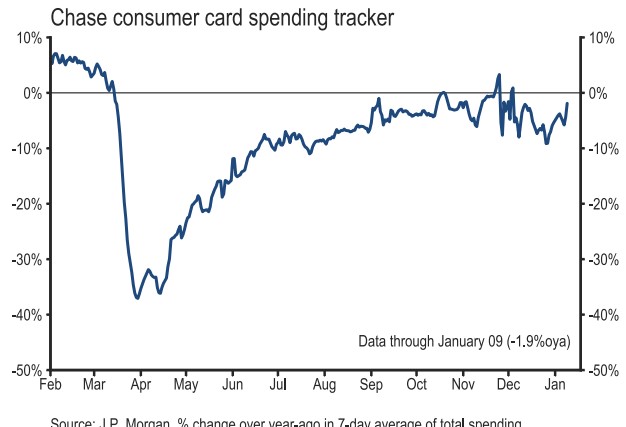 The government is ready for another stimulus even as the $900 billion stimulus that just passed hasn’t even fully gone out yet. That was more of a stop gap. The 11 weeks of unemployment benefits were never enough since the pandemic will probably be a factor through mid March. While hospitalizations have peaked, 128,947 people is nothing to ignore. 11.9 million vaccine doses have been given out in America which is 3.6% of the population.

We’ve been following Israel closely because it is the furthest along vaccine distribution. Even still, it has record high cases and deaths. Out of 200,000 Israelis over 60 who got the vaccine, the infection rate was the same as those who didn’t for 14 days. After the 2 week marker, there was a 33% decline in the infection rate due to the vaccine. We should see the vaccines impact the overall data in the country starting in February or March.

Biden proposed a $1.9 trillion stimulus which includes direct payments of $1,400 and increasing weekly unemployment insurance to $400 per week. The chart above shows the 10 day average of unemployment benefits. Through early January it hasn’t increased despite the recent stimulus passing $300 weekly benefits. These new $400 benefits will extend through September. Included in the stimulus is a $15 minimum wage which would be a massive increase for the 21 states that rely on the current federal one of $7.25. That minimum wage is so low it’s almost like not having one.

It’s generally not the best idea to raise the minimum wage when the labor market is weak because raising the wage hurts job growth. We’re guessing this hike will come in stages as they usually do. Politicians love to campaign on raising the minimum wage, but then do it in stages over 5 years or so. If raising the wage is so imperative, why doesn’t it get done right away? That’s because most politicians know there are consequences that they don’t mention. The stimulus also includes extending the eviction moratoriums until the end of September. That will limit rent inflation.

The $600 checks are already increasing spending growth in early January. Redbook same store sales growth was 5.5% in the week of January 2nd and 2.1% in the week of the 9th. According to Bank of America, total card spending growth for stimulus recipients rose from 5% in December to 20% in January. Apparel is up the most which is different from the spring when electronics were up the most. Everyone already bought work from home devices. Now people are buying clothes to prepare for gatherings this spring/summer. As you can see from the chart below, Chase card spending growth in the week of January 9th was -1.9% which was a nice increase from the prior couple weeks.

Now it looks like the data has been range bound since November, but really this data would have been in a downtrend if it wasn’t for the stimulus. Looking to the end of the winter, we could see another decline before finally we get a sustainable increase from the virus being under control. Spending will certainly depend on the timing of the next stimulus. The deadline for it to pass will be mid March when the $300 weekly unemployment benefits stop going out. There shouldn’t be delays with Congress fully controlled by 1 party, but we know better than to have faith in the government to make anything painless.

3 months ago, many surveys showed people were a bit hesitant about getting the vaccine. We knew there was nothing to worry about because people would gain confidence as the procedures were done. People said they would get the vaccine a few months after it came out, but that was kind of irrelevant because most couldn’t get it by then anyway. You can see that worked out because we are 1 month into the distribution and most people still can’t get it.

The one thing we don’t need to worry about is demand. As you can see from the chart above, in September 13% said they’d get the vaccine as soon as it was available. Now 43% want it now. We aren’t close to the point where it will be available to 43% of the country. The negative is 19% still say they won’t get it. As long as everyone who wants it over 75 get it, the death total should decline and people will be able to go back to gathering together. We’re still waiting for that decline though. 7.06% of West Virginians have gotten the vaccine. The state’s 7 day average of deaths is 26 which is near its record high of 29.

We haven’t seen anything like this in well over a decade like the past 10 months, perhaps since the housing bubble. Obviously, there was a quick crash and recovery, but that doesn’t tell half the story. Retail traders are buying speculative stocks with no earnings and sometimes no sales. We know we are near the end of this bubble because traders have moved away from the tried-and-true FAAMNG stocks and into speculative stocks. Tesla passed Apple as the most popular stock on Robinhood.

In December, over 1 trillion shares of penny stocks were traded. As you can see from the chart below, the ratio of money losing tech firms to the Nasdaq has gone vertical. That’s following about 6 years where money losers underperformed the Nasdaq.

Not only do speculators have no interest in profitable companies, they look for companies that lose money. This vertical line will break like they all do. This chart tells you almost everything you need to know about the recent trend. When it breaks, it will break hard. The fact that speculators have moved on from the profitable winners suggests we are in the late stages of this bull run.

Yet a third stimulus is coming. Along with it, we might get a $15 minimum wage. The $600 checks boosted spending growth in early January. People are ready to get the vaccine. Only about 1/5th say they won’t get it. The speculation in markets has gotten so bad that traders are very bored of the FAAMNG stocks. They have become like the old value names. Now retail traders want penny stocks and money losers. They want to bet on short squeezes.