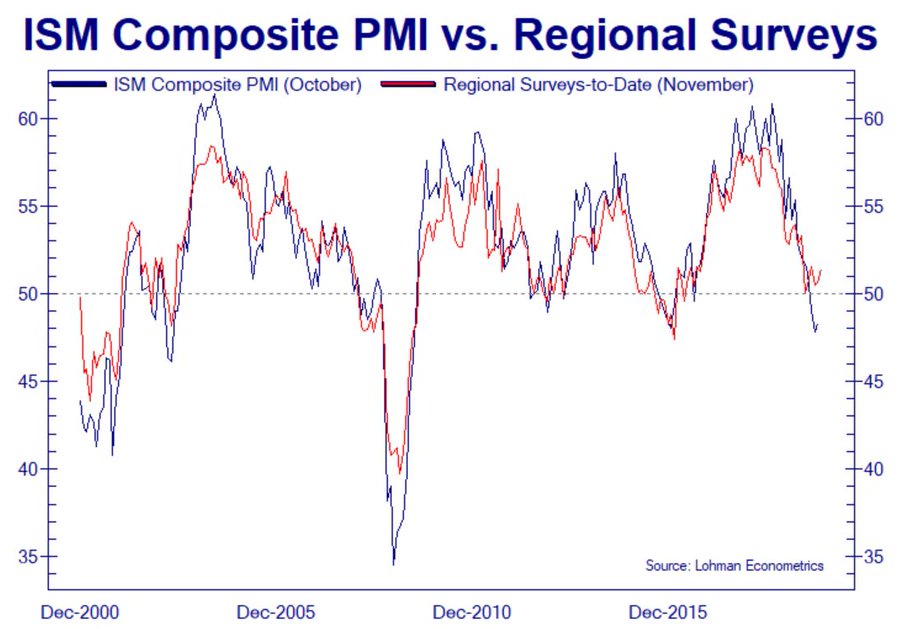 Recent economic data hasn’t been strong which is why many tracking estimates have Q4 GDP growth coming in below 1%. The November flash (first half of the month) Markit report is signaling a potential rebound. The composite flash PMI increased from 50.9 to 51.9. This report is consistent with 1.5% GDP growth and monthly job creation of 100,000. It’s ironic to see employment increase in the Markit report just as jobless claims have increased. The Markit report had recently been more bearish than the BLS report’s actual numbers, while jobless claims had been one of the more bullish indicators on the labor market.

An increase in the November ISM new orders index would help the leading indicators index. The Markit services PMI also increased nicely. The PMI increased from 50.6 to 51.6 which is a 4 month high. Just to be clear, we think that following both indicators is important. It’s notable that the Markit PMI has a higher sample size though.

In the service sector, new business increased, but growth was still weak. There’s still room for it to improve in a cyclical upturn. Employment increased for the first time since August. Job creation was only slightly positive, but that’s a good for this recently bearish reading. Despite hiring growth improving, optimism fell and was historically very weak. Input costs rose slightly, pushing up prices received growth.

Production and new orders growth increased in the manufacturing sector. Backlogs were up for the first time since June. Manufacturing is improving at a quicker rate than services. It is more cyclical after all. It could be responding to improvements in the global economy. If that’s the case, the manufacturing PMI could rise quickly. The domestically oriented service sector might respond to the Fed’s 2019 rate cuts next year. Manufacturing hiring growth was the strongest since March. Input costs rose. Strong demand allowed firms to pass price increases down to buyers. Even though the manufacturing PMI was up solidly, just like the service sector 1 year optimism fell. Optimism fell because of economic uncertainty. This could be because of the trade war, the 2020 election, or just general global uncertainty.

Unlike the Empire Fed and Philly Fed manufacturing indexes, the Kansas City Fed index was negative. The November index stayed at -3. As you can see from the chart below, the average of the regional Fed indexes predicts the ISM manufacturing PMI will rise to 51.4 from 48.

The consensus estimate for the ISM report, which will be released on December 2nd, is 50.1. The regional Fed indexes never predicted a sub-50 ISM PMI this year unlike the last 2 slowdowns. Keep in mind, that stocks actually do better when the ISM PMI is below 50 than above 50. A rise above 50 could be bad for returns.

In the comments section of the report, there was only 1 mention of tariffs, but there were 2 mentions of the 2020 election. The election could be the next negative catalyst for business expectations and capex. One firm stated, “The economy is running smoothly and efficiently at this time. We are well balanced overall and see continued growth short of political upheaval and concern around the upcoming elections.”

October existing home sales missed estimates, but increased sequentially. Sales were up from 5.36 million to 5.46 million which missed estimates by 20,000. Last month’s report had a 2.5% monthly decline and a 3.5% yearly increase. This one had 1.9% monthly growth and 4.6% yearly growth. Existing sales in October were the 3rd highest of 2019. The yearly comps will be getting easier which means double digit growth could be coming. As you can see from the chart below, sales in November, December, and January were 5.21 million, 5 million, and 4.93 million.

If the economy accelerates in 2020, we could see another cycle high in existing home sales. The labor market is strong and interest rates are low, but inventory is tight and consumers say prices aren’t affordable. There were only 3.9 months of inventories which was down from 4.3 months last year. The market is balanced when there is 6 months of inventory which means this is a sellers’ market. This supply imbalance explains why price growth was high. The median sales price of existing homes was up 6.2% to $270,900. Single family sales were up 2.1% to 4.87 million (yearly growth 5.4%). Yearly median single family prices rose 6.2% to $273,600. Condo sales fell 1.7% yearly to 590,000; median prices were up 5.6% to $248,600.

Obviously, 1.5% GDP growth is weak. The fact that the Markit PMI essentially hit the consensus estimate for GDP growth isn’t the point. Compared to its recent bearishness, it improved. If this becomes a trend, the manufacturing recession is on its way to being over and 2020 economic growth will show improvement. The Kansas City Fed index stayed at -3, but the 6 month expectations index rose from 2 to 15. The existing home sales report was solid just like housing starts and permits. The new home sales report comes out on Tuesday.