Is Housing In A Bubble? 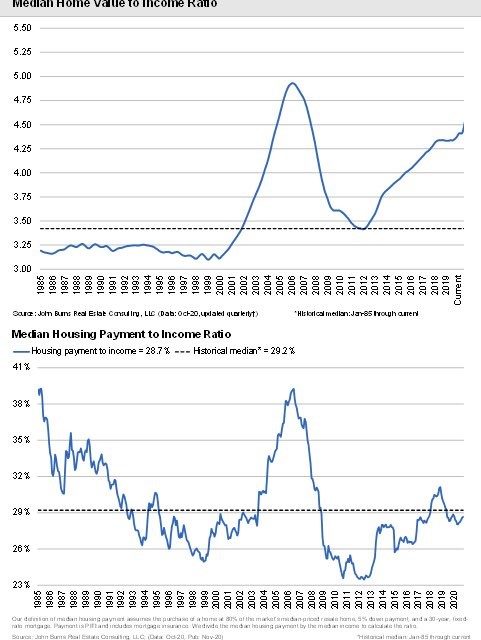 Now that 2020 is over, there is some whitewashing of how bad the recession was because of how great the stock market has done and optimism about the vaccines. On the other side, the NBER hasn’t determined the end month of the recession yet. It makes sense to wait until the virus is contained before making that call. The recession is clearly over, but NBER isn’t a forward looking investor like markets are. It is making sure it won’t get it wrong. Sometimes end dates are changed, but there aren’t that many options for this one because it was so brief. The recession was basically from March to May. You can even go by weeks if you want to because the drop off and recovery were so sudden.

The recession was devastating to the bottom 50% of wealth/income and small businesses. It doesn’t matter how much the Nasdaq 100 rises. Let’s face the facts. Large companies were in some ways helped by the virus. That doesn’t mean it was a good thing, since it came at the expense of small businesses. One of the most dramatic data points on the recession was just released.

As you can see from the chart above, there was a 17.9% yearly increase and a 16.8% monthly increase in U.S. households filing for food stamps in April. The divergence among states is massive. North Carolina had a 2.4% monthly decline and Massachusetts had an 89.6% increase. The virus didn’t affect the south early in the pandemic. It was more of an issue in the summer. This is just a glimpse of the devastation caused by the recession. This gets to how economically unstable working-class households are even though households have deleveraged since the housing bubble. It only took a few weeks for people to go straight to food stamps. This program doesn’t give people much money to spend on food, leading to food insecurity.

Housing is a double edged sword. Housing loans in the past 10 years have been given to well qualified buyers. Furthermore, low interest rates have been locked in. More people can refinance in 2021 if rates stay low. Furthermore, there isn’t much supply of homes and demographics are great. The most common age group in America is upper 20s which is when people start buying their first home. Affordability is important to first time buyers because they don’t have a house to sell to pay for the next one. There has been an increase in people moving from cities because of the pandemic, but that will probably go away when the virus is controlled later this year.

On the other hand, housing would be very expensive if rates rose. The charts above show the difference. The housing payment to income ratio signals housing is about as affordable has it has been on average. The top 50% have done fine in this recession, so they bought homes quickly after the initial decline in the spring due to the pandemic. Low rates helped bolster the secular trend.

As you can see from the chart on top, the home value to income ratio has only been higher (in the past 35 years) during the worst of the housing bubble. This is sort of like how low rates are justifying higher stock prices. If rates rise significantly, many might call this a housing bubble after the fact. There isn’t much bubble activity, but a lot of assets such as housing are too expensive if the 10 year yield rises to 5%. We aren’t saying that will happen, yet at least. It’s just a scenario to understand.

33 stocks in the Nasdaq 100 were up 50% or more in 2020. That’s the most since 2013 when 34 were up that much. In 2020, retail investors discovered leveraged ETFs and options. There has been record breaking small options activity. Many thought there was bubble activity in 2019. However, it took until retail traders were going long out of the money call options on speculative stocks on margin for there to be a true mania. That’s what we are seeing now. It’s virtually impossible for this to end well for them and the stocks they are trading.

The chart above shows some of the gains we saw this year in ETFs. 95 ETFs were up over 50% and 21 were up over 100%. Clearly, there has been an increase in ETFs in the past 13 years, but the gains have still been large. Obviously, these gains weren’t in passive total market indexes. They were in the riskier products. One of the most popular ETFs after the recession ended was JETS which measures the airlines. That’s catchy name helped it gain popularity. According to the AAII investor sentiment survey, at the end of the year, 46.1% of investors were bulls and 25.6% were bears. The NAAIM exposure index was down from 89.11 to 82.97. It has been above 80 since the week after the election and the good vaccine news came out.

Since 2020 was the year of the retail trader, you shouldn’t be shocked to find out there wasn’t an increase in the share of passively managed funds as a percentage of assets under management since the pandemic started. Retail investors think they can do it themselves without Wall Street or the indexes. That’s not wrong, but traders are going about it the wrong way by allowing greed to take over their process (or lack thereof).

This period is similar to 2006 and 2007 when the passive share stayed the same. Eventually the share of passive investors will become a problem. Buying a stock just because it is in an index is bad for the economy and markets. It makes them inefficient if enough people are doing it. We don’t know when the tipping point will be reached though.

There was a large spike in people on food stamps in April in the states that were hit the hardest by the pandemic. Housing is affordable as long as rates stay low. There is a bubble in retail trading activity with many ETFs rising over 100% and call options activity from small traders at a record high. This active investing caused the increase in passive’s share to stall in most of 2020. Eventually, passive will become an issue. 2020 actually pushed the tipping point further in the distance.