Is Extreme Bearishness A Contrarian Indicator? 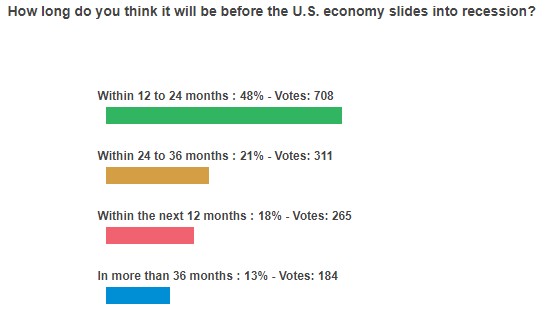 Sentiment surveys show that investors got extremely nervous during this recent correction over the past few weeks. It’s quite remarkable that the percentage of bears got almost as high as the December 2018 mini-bear market and the percentage of bulls fell nearly as low as then. At the worst, the S&P 500 fell 6.8% in August 2019; stocks fell about 20% late last year. Investors are hyper sensitive to movements in stocks and changes in news flow. To be fair, since late last year trade tensions have gotten much worse and nominal yearly GDP growth is lower. There are more tariffs now and yearly nominal GDP growth decreased from 4.9% in Q4 2018 to 4% in Q2 2019. The main positives are the consumer and the increasing likelihood of a more dovish Fed.

Specifically, the chart below shows the percentage of bears literally doubled from the previous week as it went from 24.1% to 48.2%. That’s much higher than the long term average of 30.5%.

In the prior week, investors were only slightly less bearish than usual despite the market being up about 20% year to date before this correction. It wasn’t an overheated market in sentiment terms. Keep in mind, this survey measures where investors see stocks going in the next 6 months. The percentage of bulls fell by 16.8% to 21.7% which is much lower than the historical average of 38.5%. Somehow the percentage of bears is already double that of the bulls and this hasn’t been a proper correction of 10%. This was a normal pullback, yet a high percentage of investors panicked.

It’s not just individual traders who panicked. Hedge fund managers became the most bearish since February 2016 based on their net short to net long ratio. Bulls love to see so many professional money managers changing their minds after such a small decline. If it takes a little decline to send people into a frenzy, this market is nowhere near euphoria. However, remember the market doesn’t need to reach a magical level of extreme greed to fall into a bear market. Instead there needs to be a negative catalyst such as heightened trade tensions or a recession. It’s very possible the euphoric peak was in January 2018. After that peak, stocks have since been in a sideways correction.

These surveys are easier to follow in euphoric markets because stocks top out slowly. On the contrary, bottoms happen quickly. By the time this survey came out on Thursday, the market had already rallied significantly from its low. It’s best to follow the market in real-time when timing extreme fear. This survey was taken from Thursday through Wednesday. If the survey was only taken after the recent rally, sentiment would have been more positive.

The American Association of Individual Investors also asked traders what they thought of the Fed’s rate cut. 30% of traders said they didn’t like it. 13% said it limits the Fed’s options when a recession comes. 14% said the decision was political. Essentially, that means 57% didn’t like it. Just 23% said the rate cut was the right response. One trader stated, “Feels like a bad decision. They should have maintained the rate so that there would be more room to adjust rates when needed.” It’s ironic that these same traders who panicked after such a small correction are disappointed the Fed reacted to the same negative news with a rate cut.

As you can see from the chart below, 82% of investors don’t see a recession occurring in the next year, while 87% see one occurring in less than 3 years.

It’s very common to see respondents not wanting to stick their neck out with a prediction in the near term, while being confident a recession will occur in the next couple years. We’ve seen these types of results for years. Don’t be scared about recession predictions 2 years from now. It’s hard to say with confidence what the economy will be doing by then. We just find this poll interesting because even though a huge swath of investors turned negative on stocks, they don’t see a recession in the next year. 24% of traders see the trade war as causing the next recession. If a deal is made, there will be a big rally in stocks.

Was The Fed Correct To Cut?

Before the rate cut was made, we mentioned how the Fed was cutting rates while financial conditions were loose. That’s like bringing more water to a flood zone. However, as you can see in the chart below, when Trump’s tariff caused stocks to fall, financial conditions got tighter.

The move in stocks was nothing compared to the treasury market where rates cratered. Investors panicked. The 10 year treasury is 2 standard deviations rich according to Bank of America’s model based on the economy. The model has the 10 year yield at 2.5%. This just shows how much panic buying has occurred in the past few weeks.

Even though it has become tougher to sign up for unemployment claims which has suppressed them, initial claims continue to be inversely correlated with stocks. When claims are low, stocks are high and vice versa. This correlation has been in place for years; claims’ forecast hasn’t made a major mistake yet. As you can see from the chart below, claims fell to 209,000 in the week of August 3rd, showing the labor market is in fine shape. That explains the strong consumer spending growth.

Investors got very nervous after the small 6.8% decline in the S&P 500. That’s a very bullish sign. Investors still don’t see a recession occurring soon though. The Fed may have been correct to cut rates because financial conditions were hurt by the stock correction which started after the tariff announcement. The panic buying in treasuries got absurd. Jobless claims continue to signal that stocks will move higher.