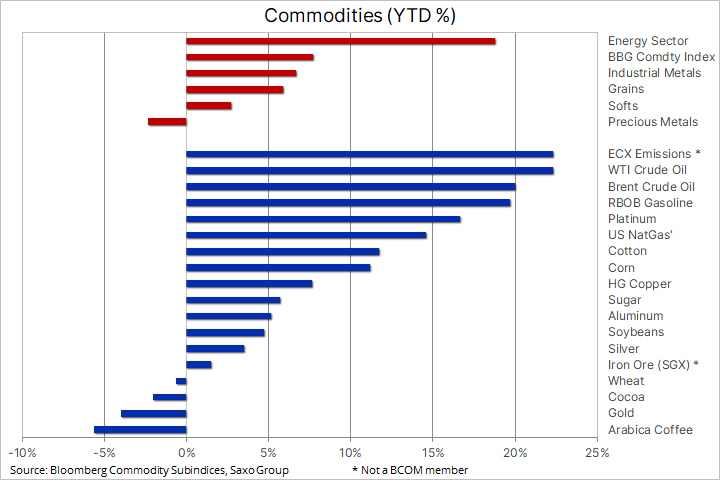 The calendar should be arbitrary and have no significance to markets, but it does affect them because of the way money works. For example, money usually comes into markets at the beginning of the month. At the end of the quarter, money managers try to “window dress” by buying the winners of the past three months. There is low volume at the end and the beginning of the year. The best winners of the year usually do well in December and poorly in January. Many investors hold big winners into the following year to delay tax payments.

This is only part of the story as to why 2021 has already been so different from 2020. The other reasons are the exciting boost in the number of vaccines given out and the anticipated stimulus packages. Specifically, with energy there has been a recent surge in cold weather in the middle of America which has led to power outages especially in Texas. This weather is a reminder of just how different 2021 is from 2020. Oil went negative about 10.5 months and now it’s in the low $60s. Sentiment has turned towards commodities; it seems like every new event is a positive for the industry. What a turn of events! The chart below shows what commodity investors didn’t believe was possible last spring. Almost all major commodities are up year to date except for precious metals, cocoa, and coffee. This is the magic of a macro cycle shift. It’s powerful, although, it still hasn’t sent down the high flying tech stocks.

Investors who ignore macro will get swamped if they weren’t positioned for this. It’s funny how the same people who say they don’t follow macro also are betting everything on rates staying low. If your entire portfolio is a long duration play, shouldn’t you at least have an understanding of where rates are headed? Or if you don’t know where rates are headed, you could own banks or energy to diversify your duration risk.

Bond yields are in line with the cyclical shift as are most markets. The 10 year yield is at 1.32%. The curve is steepening as you can see in the chart below. Of course, this is only the recent history of the curve. The difference between the 10 year yield and the 2 year yield peaked at 2.84% last cycle. It will continue to steepen as long as economic growth keeps accelerating and the Fed keeps rates low. The Fed is nowhere close to hiking rates as the economy hasn’t reopened yet. The market is pricing in the future, but the Fed can’t. This scenario has led to the steeper curve.

What A Quick Recovery

For a few weeks in March, the most emotional fearful investors called for an outright depression. We should not be amused at those outlandish economic predictions because there initially were predictions that a few million Americans would die which is tragic. The spread of the virus was high and we didn’t know how deadly it would be. We aren’t discounting the more than 486,000 Americans who died, but the pandemic wasn’t as bad as the worst fears. Furthermore, the economy quickly adapted as businesses relied on software more than ever. Also, fiscal and monetary policy were the most stimulative in US history.

The stimuli stemmed the bleeding. After the next round of stimulus checks goes out and the economy starts to reopen in the spring, many people will be doing better financially than they were at the start of the pandemic. The COVID-19 crisis was different from other recessions because of the significant hardships experienced by the lower income class who couldn’t work from home. This made the government more motivated to help people. The fact that some are complaining the government hasn’t done enough shows how far the Overton Window has shifted. The greatest stimuli ever are being discounted. Of course, to some people nothing is ever enough, but there are cries from real economists for more help. We aren’t saying it’s not warranted. We’re just adding context to the discussion.

Following the last crisis, U.S. GDP never reached its prior trend. This time US GDP will reach its prior trend because of the sharpness of this recovery and the fiscal/monetary help. Some will probably see this as the proper policy course for all future recessions. That being said, it was going to take time to unwind the biggest housing crisis in U.S. history no matter what policy was pursued.

As you can see from the chart below, Q4 S&P 500 earnings exceeded the pre-pandemic high by 2%.

It’s an oversimplification to say profits are back because they have dramatically shifted in unsustainable ways. The biggest internet companies are doing extremely well, while energy lost money yet again. While many believe energy will never be a good investment and that the large internet companies will never lose their growth, that may not be a high probability bet.

We’re already seeing energy have a good start to 2021. Furthermore, work from home tech purchases won’t stay at the elevated level they were at last year. Finally, small businesses will have a fighting chance to succeed because of the reopening of the economy, the desire to do things in person, and the buildup in consumer savings. Of course, we haven’t even mentioned the mounting legislation the large internet firms face. Politicians around the world are coming for the big internet firms’ wide profit margins.

What seemed impossible in 2020 is happening in 2021. The yield curve is steepening and commodities are rallying. The cold weather in America is boosting oil and natural gas prices. Support for green energy is taking a hit because it can’t power the country in such times of strife. We just had the strongest fiscal and monetary policy reaction to a recession in history. The economy is set to get back to its pre-recession growth trend in Q3. Furthermore, profits are already back for S&P 500 firms. We are just at the beginning of a long term secular trend towards regulating the big internet companies.