Is A 12% Decline In Jobless Claims Good Enough? 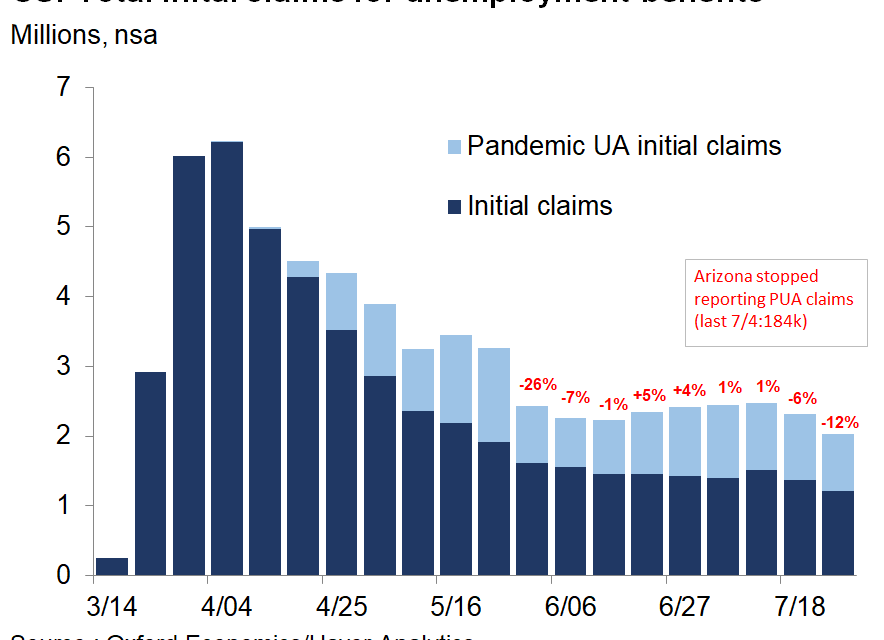 PUAs fell 106,000 to 830,000 which is a decent improvement. Remember, PUAs can’t be adjusted because this is a new program. As you can see from the chart above, unadjusted claims including PUAs fell 12% which was the biggest decline since late May. The total is still 2.04 million, but it’s making progress. This is great news considering the fact that we are only scratching the surface of a potential decline in COVID-19 cases. Deaths haven’t even peaked yet.

The bad news is continued claims rose from 16.151 million to 17.018 million in the week of the 18th. That’s the BLS survey week. It just supports what we already knew, namely the BLS report is going to be bad. It’s much more important to know when the restrictions will be lifted due to the decline in COVID-19 cases and how quickly the recovery will be once it resumes.

We almost never discuss the NAAIM investor exposure index because about 90% of the time, it doesn’t tell us much. However, the past two weeks have been extremely bad for the bulls. Investment managers have gotten way too bullish. As the table below shows, in the week of July 29th, the exposure index stayed above 97. The first quartile had an exposure reading of 87.25%. In other words, the relatively bearish investors were still almost all in on stocks. Remember, tops aren’t made quickly. It usually takes longer than you’d expect. In other words, these two scary signs, might not mean anything for a few weeks. That’s different from pessimistic bottoms which generally occur right after extreme readings are shown.

The counterpoint is usually that the AAII investor sentiment survey shows more bears than bulls. Even if you are bullish, please don’t use this as one of your arguments. The percentage of bears has been higher than the percentage of bulls for 23 weeks which is a new record streak. This week, the percentage of bulls fell 5.8% to 20.2% which is an astounding 17.8% below average. The percentage of bears rose 1.6% to 48.5% which is 18% above average. Stop for a second and realize this survey is clearly not reflecting individual investor positioning. We have the widest retail investing exposure since the 1990s with millions creating new accounts. Clearly this survey doesn’t reflect their excitement.

The chart above shows that sentiment was very poor prior to the financial crisis in 2008. This isn’t to say another crisis is coming. The point here is that you shouldn’t always fade the AAII survey when it shows a lot of skepticism. Based on recent surveys, if stocks rise in the next few weeks, there will only be more bears and less bulls. The record streak for bears outweighing bulls could be destroyed. There are so many more bears, the streak isn’t close to ending. This is not the market climbing a wall of worry like normal bull run. Firstly, this steak of readings is unprecedented; secondly, investors are positioned bullishly.

The big internet firms went from claiming they don’t have monopoly powers on Wednesday in a Congressional hearing to reporting monopoly-like great results on Thursday. This was an amazing juxtaposition. As you can see from the chart below, Facebook has been growing its annual lobbying spending. After Facebook, Amazon, Apple, and Alphabet reported on Thursday, CNBC commentator Michael Santoli stated, we are in a “can it possibly get better than this moment.” Individuals discussed burning their value investing books because they missed the recent run in FAANG stocks. Bull market leaders that outperform for years act like vacuums, sucking up everything in their sight.

The market is at an extreme moment as the 5 year yield fell to 22 basis points which is the lowest level on record and the dollar fell to its lowest level since May 2018. As per usual, growth stocks lead by the big internet names are trouncing the value stocks. Although, the small cap value index is up almost 8% since July 9th. Low yields are being used as an argument to pile into growth stocks, but value stocks have been mostly ignored in the past few months. As you can see from the chart below, value stocks have a 2.7% higher yield than investment grade debt. The desperate search for yield hasn’t pushed investors into value names.

The jobless claims report was actually good for once as PUAs and regular unadjusted claims fell. The NAAIM index shows managers are way overweight stocks. This is a dangerous sign, but it doesn’t mean there will be a correction in the next few days. It can take a couple months for one to occur. There is extreme euphoria in the FAANG stocks despite the increased likelihood of regulations. That’s why they are spending more on lobbying. Value stocks have not benefited from the global search for yield.