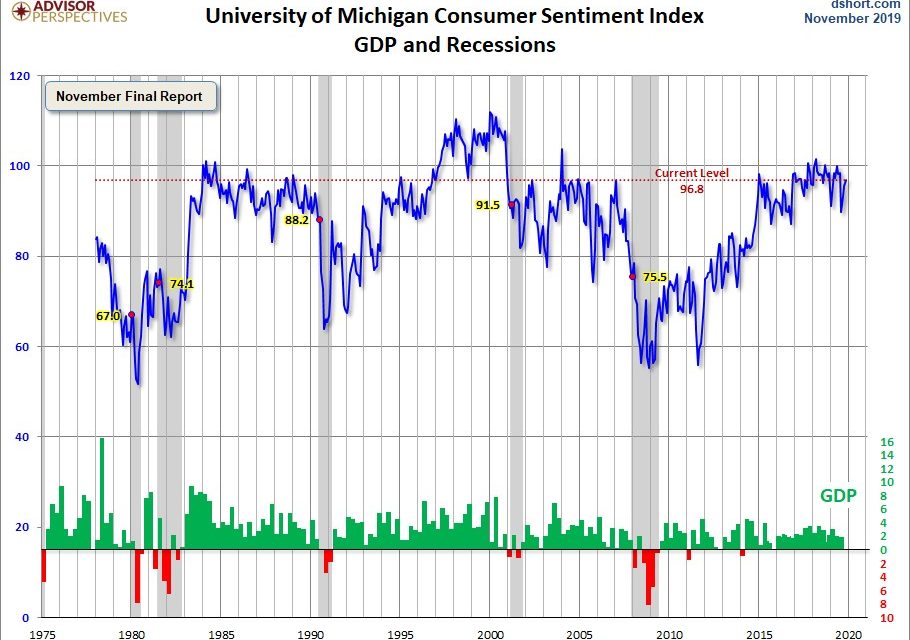 Some say price is the best sentiment index. If that’s the case, investors are euphoric because the S&P 500 rose to another record high on Monday as it canceled out its less than 1% decline in its 3 day losing streak in the prior month. The S&P 500 is up 25% year to date. Whenever negative economic reports have recently been released, the market has ignored them. Traders are very confident the economy will turn around after Q4, so Q4 data doesn’t matter much to them.

As you can see from the chart above, the Goldman Sachs risk appetite momentum indicator is at historical highs. That’s while the Atlanta Fed, NY Fed, and St. Louis Fed Nowcasts project 0.4%, 0.71%, and 1.57% Q4 GDP growth. The October ECRI coincident index shows 1.7% growth which is slightly above the 2016 trough of 1%. The leading index in the week of November 15th showed 1.1% growth on weak comps. The VIX has been below 15 for 31 days (longest streak of 2019), while Chicago Fed national activity index cratered as we will discuss later in this article. The market is being led by healthcare as the betting market shows Biden has a better chance of winning the Dem nomination than Warren. The XLV is up 12.81% since October 8th. PredictIt has Biden with a 23% chance of winning and Warren at 21%.

The final University of Michigan sentiment index increased 9 tenths from its preliminary reading. As you can see from the chart below, it was up from 95.5 to 96.8. It’s not near where it has been at the start of the past 5 recessions. This implies there isn’t an imminent recession.

There won’t be a recession if consumer spending reflects current optimism. The sentiment index was at 91.5 before the 2001 recession, but that was a big drop from the 1990s peak. This expansion had a lower peak which implies the start of the next recession will have a reading in the 80s. It’s important to note that sentiment isn’t revised after it is calculated to show different results.

It’s ironic that in both optimistic periods, there were impeachment proceedings (Clinton & Trump). Currently the data shows, there is more partisanship and a greater difference between business and consumer confidence than in the 1990s. Even if a consumer thinks the economy will tank because of partisan reasons, it probably won’t hurt their spending significantly if they have a good job that is secure and provides consistently positive real wage growth. This explains why the consumer has been strong recently.

Consumers don’t expect inflation, unemployment, and interest rates to fall, but they don’t expect significant increases either. Consumers expect their personal financial situation to improve as there were gains expected throughout income levels. This is different from the weakness in the Bloomberg Consumer Comfort index for those making under $50,000 earlier this month. There were net increases in household wealth probably because of the positive growth in home prices and the strong stock market. There was renewed excitement about discounts (good for holiday shopping) and falling mortgage rates.

The previous Bloomberg Consumer Comfort index showed the largest 3 week decline since 2008. That changed in the week ending November 17th as the index increased for the first time in 5 weeks. It increased from 58 to 59.1. The consumer’s opinion of their personal finances, the buying climate, and the economy increased similar to the University of Michigan report. Economic expectations rose to a 4 month high. Confidence from Republicans fell to the lowest level since May 2018. They became less optimistic because of the impeachment proceedings. Their confidence has fallen 5 straight weeks and is down 10 points from its record in September. Independents and Democrats became more confident. Previously their confidence had been falling with that of Republicans.

Stocks rallied on Monday despite the technically recessionary Chicago Fed index. We say technically because the 3 month average needs to fall to -0.7 for there to be a recession call, but just the October index fell there. The index fell from -0.45 to -0.71 which missed estimates for -0.2. As you can see from the chart below, the 3 month average fell from -0.21 to -0.31.

This report was impacted negatively by the GM strike, but the results weren’t great otherwise, similar to the industrial production report. The production components fell 0.55 after falling 0.36 in the prior month. That was the GM effect. Keep in mind that only 27 of 85 indicators made positive impacts on the index and 58 hurt the index. It wasn’t one part of the report that caused it to be negative as all the major segments were negative. 51 of the 85 indicators had actual results and the rest were estimated. Sales, orders, and inventories hurt the report by 3 basis points. Employment indicators fell 10 basis points. Personal consumption and housing hurt it by 3 basis points.

To be clear, the GDP Nowcasts will be too negative if consumer spending growth is strong like the sentiment index implies it will be this holiday shopping season. Also, the Chicago Fed national activity index wouldn’t have been in recession territory if it wasn’t for the GM strike. On the other hand, stocks are rallying higher even though business investment is falling. The healthcare sector is helping the market as it has outperformed recently because Warren has slipped in the polls.