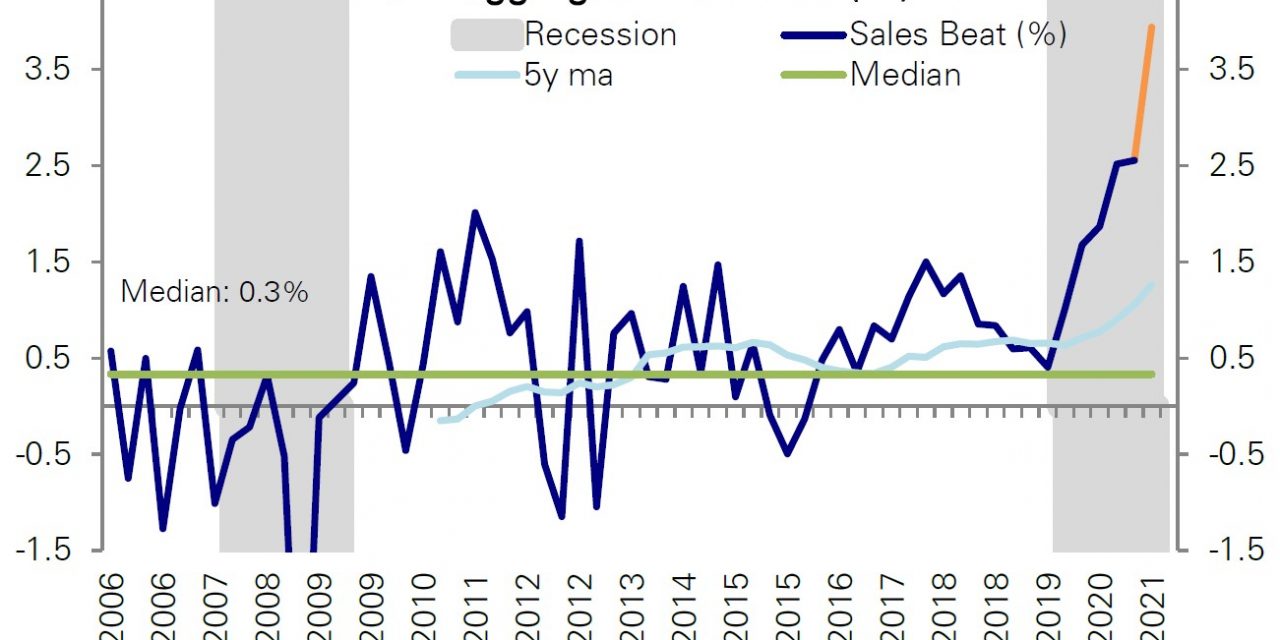 The ISM and Markit manufacturing PMIs went in opposite directions this month. The ISM PMI fell modestly. Keep in mind, this is a diffusion metric. It measures sentiment versus the prior month. It’s very difficult for more businesses to say business is better than the prior month when the prior month had strong results. Anything above 50 would have been impressive based on the very strong comp in March. The manufacturing sector is still strong, but it couldn’t get stronger in rate of change terms (at least in the ISM reading). The biggest increase in cyclical stocks is likely over, but this PMI doesn’t mean they will necessarily fall.

As you can see from the chart above, the ISM PMI was down from 64.7 to 60.7 which is still a very good reading. In fact, this is the 3rd highest reading in the past year. It’s consistent with a 5% increase in GDP which is normally very good. 2021 is expected to see 7% GDP growth due to the reopening and the multiple stimulus programs. The new orders, production, and employment indexes were all down modestly. They fell 3.7, 5.6, and 4.5 points to 64.3, 62.5, and 55.1. Inventories were in contraction territory which makes sense because there is a shortage of a bunch of raw materials such as lumber.

The economy is running hot. Specifically, the inventories index fell 4.3 points to 46.5 and the customer inventories index fell 1.5 points to 28.4 which is extremely low. Electrical components and corrugated boxes have been in short supply for 7 months and 6 months respectively. The prices index was up 4 points to 89.6 which is the highest reading since July 2008. That was when oil was well above $100 per barrel. Outside of July 2008, this is the highest reading since 1979.

We’ve seen some use this report to say there is stagflation. That’s extremely wrong because this report shows the manufacturing sector is very strong. We aren’t going to have inflation like the 1970s and 1980s, but CPI should get above 3% this summer which is very high in terms of the last decade of data. Every single commodity was up in price except for propylene. A fabricated metal products firm stated, “Steel prices are crazy high. The normal checks on the domestic steel mills are not functioning — imported steel is distorted by the Section 232 tariffs.”

Warren Buffett at the Berkshire Hathaway annual meeting echoed this sentiment. It’s ironic to hear investors like Buffett say the stock market relies on low rates and add that inflation is ramping. That certainly poses a valuation risk since higher inflation can drive rates higher. In the past few weeks, the 10 year yield has been stuck in a range. If it makes a new high, valuations should fall.

The chart below shows the Markit manufacturing PMI increased in April unlike the ISM PMI. This PMI hit a record high as it rose from 59.1 to 60.5. Data only started being collected in May 2007 though. New order growth also hit a record high (highest in 11 years). Of course, price growth was extremely strong. Costs increased at the fastest rate since July 2008. That’s the same as the ISM’s prices index. It’s difficult to find any economic metric that shows inflation isn’t rising quickly.

The Chief Business Economist at Markit stated, “Supply chain delays worsened, however, running at the highest yet recorded by the survey, choking production at many companies. Worst affected were consumer-facing firms, where a lack of inputs has caused production to fall below order book growth to a record extent in over the past two months as household spending leapt higher.”

At the Berkshire annual meeting, Mr. Buffett commented that customers were willingly accepting price increases. When demand is so high that there are shortages, customers are excited to get the raw materials at any price. The lumber market is the best example of this. Buyers just want material. They don’t care about the price. This reminds us of a stock market bubble. It won’t continue for long.

This is a tough stock market to navigate because earnings results are so good, but there appears to be excesses in the market. Investors are very confident. In fact, stocks as a percentage of US household assets are 41% which is a record high going back to 1952. Do you sell stocks when aggregate sales beats are exploding just because everyone owns stocks? The best option is to find businesses that are growing sustainably and are trading at a good price. That’s not an impossible task, but it is tough!

The Macro Picture Can’t Get Better

Let’s take a step back from the cyclical economic improvement. Let’s look at trends in terms of decades. As you can see below, US corporate taxes and bond yields have been falling in the past few decades. That can’t continue. In fact, the Democrats plan to raise taxes and the minimum wage because labor’s share of output has been declining since the early 1970s.

In addition to rising minimum wages, there is likely be an increase in union membership in the next 20 years as we have been predicting. Finally, the chart on the upper right shows there have been very little concern about competition, mergers and monopiles. This will change in the next decade because we have record high centralization.

The manufacturing PMIs were both good even though they differed. They both showed inflation is increasing rapidly. The CPI report should show above 3% inflation this summer. More firms are giving guidance because the economy is running hot. Sales are beating estimates sharply. In the next few decades, we believe US corporate profits will struggle to grow quickly because there will be more investigations into monopolies, wages will rise due to more union membership, taxes will rise, and interest rates will stop falling.