Inflation Is Coming But Will It Be Transitory? 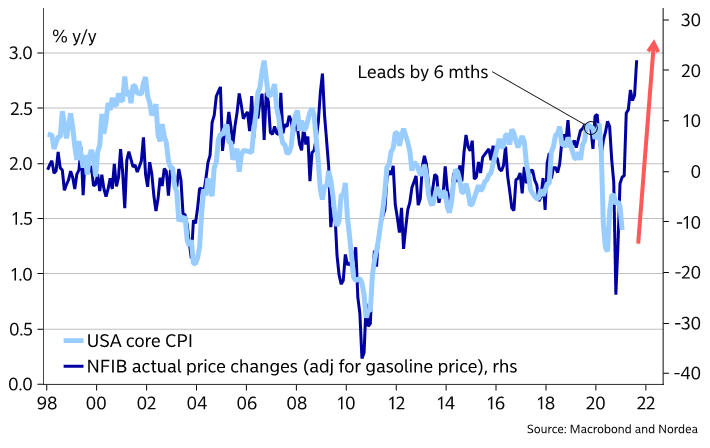 The factor swings that started after the vaccination data came out in November haven’t stopped in 2021. It has been breathtaking. There are three segments of the market. There are the cyclical value stocks that benefit from the reopening and rising rates. Then there are the high growth secular companies that benefited from the lockdowns and low rates. The new 3rd part of the market is the meme stocks retail investors love. This is different from cult story stocks that have beloved brands and high valuations. Some investors on social media revel about how little fundamental research they have done.

As you can see from the chart below, the spike in retail trading in 2020 and 2021 means retail volumes are almost as large as mutual funds and hedge funds combined. Retail investors aren’t bothered by the 10 year yield rising. The biggest fundamental shift in their activity should come when the economy reopens. We think they will spend their stimulus money on real economic activities instead of investing it in the stock market.

The latest crazy factor move was on Tuesday when the big cap internet stocks exploded. It was a great day for growth and meme stocks. The meme stocks have taken over some of the value indexes making them useless. Going back to 1996, there were only 5 prior days where the S&P 500 rose as much as it did while having a net negative number of stocks advancing. The other examples were all when the dotcom tech bubble was bursting (outside of one day in November 2020). The huge rally in the secular growth stocks may have been a head fake. The strongest rallies occur in bear markets.

The NFIB small business confidence index was 95.8 in February which was just a 0.8 increase from last month. The NFIB index is finally done declining due to political reasons. However, it will likely stay suppressed until another Republican gets elected president or the GOP controls Congress. As you can see from the chart below, hiring plans decoupled from the overall index which signals this was a political issue.

In February, the net percentage of firms with current job openings rose 7 points to 40%. This is consistent with the level of job creation in the leisure and hospitality industry in February’s BLS report. The earning trends category was up 5 points to -11%. The net expecting the economy to improve was up 4 points to -19%. Oddly, the worst part of the report was the 3 point decline in expectations for credit conditions. Credit conditions couldn’t be better. This doesn’t make sense.

Inflation Is Coming This Summer

As you can see from the chart below, the NFIB actual price changes index adjusted for gas prices implies core CPI will rise to about 2.9% in the next 6 months. This same chart implies core PCE inflation will rise to about 2.4% this spring. The most interesting aspect of this coming spike in inflation is that policymakers think it will be transitory. That reaction makes the inflation spike more sustainable.

The more ‘establishment’ an economist’s thinking is, the more likely they are to expect inflation to be temporary. There is huge recency bias on inflation because very loose monetary policy hasn’t caused inflation in the past 10 years. The difference this time is fiscal policy is very loose. Plus, the economy is about to reopen which hasn’t happened in decades (hasn’t gone from closed to reopened). The bond market disagrees with most economists. There is no chance the Fed will hike rates this year. There is nothing to stop the coming inflation.

The biggest suppressant of core CPI has been shelter inflation. New and existing home prices have risen, but rent inflation has been low due to the moratorium on evictions and the weakness in cities. If shelter inflation spikes in the next 6 months, we can get to 3% core CPI.

As you can see from the chart below, the median consumer expectation for rental costs is a 9% increase in the next year which is up from 6.4% in January.

From 2014 to 2020, this never went above 6%. Shelter inflation is about to lap extremely easy readings later this year. The weakness starts in March. We will definitely see a bottom in yearly shelter CPI in the March reading. The March report comes out in about a month since the February reading came out on Wednesday.

Job Postings Are Back

We expect much higher job creation in March than in February. This expectation is supported by the latest job posting data from Indeed. As you can see from the chart below, job postings are now 6.7% above the pre-pandemic peak. This is updated as of the first week of March. We are excited to see the coming decline in jobless claims. Alaska just announced everyone over the age of 16 can now get the vaccine. There are now less than 40,000 Americans hospitalized with the virus.

The stimulus has a monthly payment per child almost like a universal basic income. There is about be $250 per month ($300 per month for children under 6) given out from July to December. This is probably overkill if we’re trying to counter the effects of the pandemic because the economy should be much closer to full employment by July. However, helping parents is a major victory because having children has gotten too expensive.

The stock market is having the greatest factor rotations since the tech bubble burst. That’s a bad sign for growth stocks despite their victory on Tuesday. Small business confidence increased slightly. The rise in prices in the NFIB report implies core PCE and core CPI inflation will spike this spring and summer. Policymakers believe it is transitory. If rents actually increase as much as the consumer survey indicates, we will see above 3% core CPI inflation. The comps are going to get easier starting in March. Job postings have more than fully recovered. The labor market probably won’t have a need for more stimulus by July, but helping parents is always welcomed news.