How The Federal Reserve Will React To The Next Financial Crisis 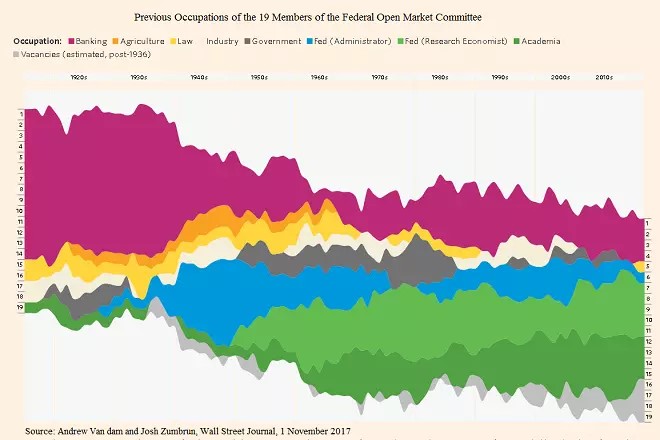 If you measure the success of the Fed by the stock market or the latest GDP reports, it is doing well at setting policy as inflation is low, stocks are high, GDP growth looks like it will be in the mid-2% range in 2017, and consumer confidence is high. That doesn’t make the Fed any less interesting because the Fed never runs out of perplexing things to say as it exits the unprecedented policy measures put in place after the financial crisis. With Powell set to start his term in February 2018, the Fed statements are more important as investors try to determine if there’s a policy change or a change in forward guidance.

As a primer, the chart below shows the historical backgrounds of each member of the FOMC. It appears Trump wants to pick Governors who have private sector experience instead of government experience. However, it’s impossible to determine how the FOMC members will vote based on only their background. This chart is simply food for thought.

Since Jerome Powell was selected to be the Fed chair and will assume the position in February, let’s review some comments he’s made in the past. Keep in mind, his first Fed meeting as chair will be on March 21st. At that meeting, there’s a 68.1% chance the Fed raises rates at least 1 time.

At the October FOMC meeting in 2012 after the Fed announced QE3, he said:

“First, the question, why stop at $4 trillion? The market in most cases will cheer us for doing more. It will never be enough for the market. Our models will always tell us that we are helping the economy, and I will probably always feel that those benefits are overestimated. And we will be able to tell ourselves that market function is not impaired and that inflation expectations are under control. What is to stop us, other than much faster economic growth, which it is probably not in our power to produce?”

As you can see, Powell isn’t a big proponent of QE. Since QE is being unwound in his tenure, this negative opinion is in line with policy. If the economy fell into a recession, his opinion would be a factor because many market participants would call for rate cuts and more QE. Powell might not meet the market’s expectation for QE since he doesn’t think it creates economic growth (accurately so). He asks the rhetorical question when QE should end and at what price because it’s not clear how the policies are determined. Considering the fact that QE was unclear, this is a wake up call that the balance sheet unwind ending with the Fed owning between $2 trillion and $2.5 trillion of assets is far from a foregone conclusion.

The next quote is interesting because he’s questioning how the unwind will be a success and now he’s in change of doing that exact policy. He’ll have to make a quick switch from saying the Fed has nothing under control to saying everything is in control. At that same meeting Powell said the following:

“When it is time for us to sell, or even to stop buying, the response could be quite strong; there is every reason to expect a strong response. It just seems to me that we seem to be way too confident that exit can be managed smoothly. Markets can be much more dynamic than we appear to think. When you turn and say to the market, “I’ve got $1.2 trillion of these things,” it’s not just $20 billion a month— it’s the sight of the whole thing coming. And I think there is a pretty good chance that you could have quite a dynamic response in the market.”

The best response to Powell’s statement is so far, so good. The chart above shows the Fed’s balance sheet since the statement in October 2012.

The Fed successfully stopped buying treasuries and mortgage backed securities. Since the Fed stopped its QE, there was massive buying by the ECB. We’ll see in 2018 and 2019 when the ECB tapers its program if the ECB masked the Fed’s end of QE or if the markets were able to absorb the shock without risk to financial conditions, the economy, and the stock market. As you can see from the chart below, the Fed has barely shrunk the size of the balance sheet 2 months into the policy.

The Fed accelerated the speed of the unwind to $20 billion per month starting in January just as the ECB lowered its bond buying from €60 billion per month to €30 billion per month. Even with this unwind and tapering, the S&P 500 started the year with 6 straight records. It looks like the risks Powell worried about haven’t come true, yet.

The final quote is what stirs those who are worried about the ramifications of low interest rates and QE. Powell says,

“I think we are actually at a point of encouraging risk-taking, and that should give us pause. Investors really do understand now that we will be there to prevent serious losses. It is not that it is easy for them to make money but that they have every incentive to take more risk, and they are doing so. Meanwhile, we look like we are blowing a fixed-income duration bubble right across the credit spectrum that will result in big losses when rates come up down the road. You can almost say that that is our strategy.”

The S&P 500 has had a record streak without a 3% selloff and has had a record streak of positive total monthly returns (14). This makes some investors worry if there’s an endless put in the market created by the Fed which eliminates selloffs. The reason this is worrisome is because the more unhinged valuations become, the further stocks can fall. It’s easy to see a Fed chair like Powell pulling the plug on the idea that the Fed will help the stock market if anything goes wrong. That’s far from the ideal scenario for investors with heavy portfolio weightings in equities who’ve relied on the Fed to protect them until now.

On the bright side, Powell’s worry that ending the QE program would cause problems was unfounded as there hasn’t been any systemic risk as stocks have rallied and the economy is fine. The unwind is going well, but we’re only in the 1st or 2nd inning of it. The fact that Powell is afraid the market is being supported by the Fed is very worrisome because he might try to go out of his way to prick the bubble if stocks have a great 2018. There aren’t any great solutions to stopping bubbles; the best policy is to avoid creating them in the first place.