How Sensitive Are Rates To Economic Growth & Inflation? 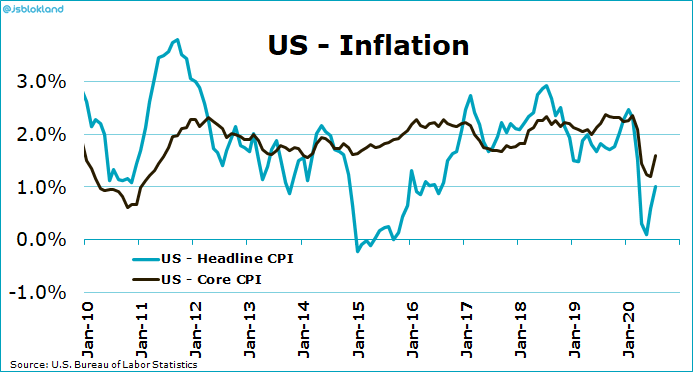 With such low rates for such a long time, almost everything that has done well in the past few years has at least been a partial bet on duration. Macro is important. The investors in growth stocks that have been helped by low rates won’t deny that. They either think they can’t predict where rates will go, or they think rates will stay low.

There are 3 important variables here. The first is how sensitive rates are to economic growth and inflation. It doesn’t take much of a cyclical recovery or higher inflation to get the 10 year yield up when it’s at 50.8 basis points like it was at on August 4th. The recent rise to 71.8 basis points occurred with some improved economic data points and higher PPI and CPI than expected. We will review the CPI report next.

The second variable is how sensitive various assets are to a rise in rates. We saw an initial reaction to this recent rise as precious metals and tech stocks fell late last week and early this week. However, gold turned around on Thursday and the Nasdaq 100 rallied on Wednesday and Thursday even as the 10 year yield went up. As of Thursday, the yield had increased 5 days in a row (to 71.8 basis points).

The final variable involves the long game. The Fed is pressing hard to push inflation higher with some FOMC members even suggesting above 2% inflation is okay even though 2% is their target. The question is what happens to markets if the Fed pushes for inflation when inflation is higher? There’s no fear of inflation when it is very low. When inflation increases, there could be a major shift if the Fed doesn’t become more hawkish. It’s difficult to say what will happen because the Fed could always act prudently when inflation increases. However, right now the Fed is trying to learn from its mistake late last cycle when it raised rates and shrunk the balance sheet. The Fed is more afraid of repeating that mistake than high inflation.

The July CPI report was in tune with the PPI report. Monthly headline CPI was 0.6% which doubled expectations and matched June’s reading. Yearly headline CPI was 1% which beat estimates for 0.8% and June’s reading of 0.6%. Food and energy were countervailing measures as food inflation was 4.1% and energy inflation was -11.2%. Core CPI was also 0.6% which tripled both the estimate and the prior reading. Finally, core CPI was 1.6% which was above the consensus of 1.1% and June’s 1.2% reading.

As you can see from the chart below, for the most part, from 2012 until before the COVID-19 crisis started, core inflation has been near the Fed’s target. However, because core PCE inflation is usually below core CPI and the Fed looks at PCE inflation closer, inflation has mostly missed its target. This partially why the Fed is getting more aggressive at trying to boost inflation. The Fed was struggling to get core PCE to stay at 2% even with full employment at the end of the last expansion.

Food at home inflation was stubbornly high as people are still eating at home more often because of restrictions on indoor dining. It was 4.6% as it was driven higher by meats, poultry, fish, and eggs which had 8.4% inflation. In recent years, core inflation has almost exclusively been driven by services. That trend continued in this report as core commodities inflation was -0.5% and core services inflation was 2.3%.

Core inflation has largely been driven by shelter because it’s the largest cost people incur (highest weigh in CPI). Shelter inflation was 2.3%; it was in the low to mid 3s in the past few years before the COVID-19 recession. In June, medical care services inflation hit 6% which was the highest since at least 2000. It fell to 5.9% in July, but that was a 0.4% 2 year stack increase because of the tougher comp. It’s probably going to fall further in August because the comp is 1% harder.

As we have mentioned in previous articles, used car demand is doing great. The Black Book used vehicle retention index was up 9% in July after increasing 8.5% in June. These spikes will cause core CPI to jump about 0.3% each. There is about a 3 month lag before it effects CPI which means the impacts will be seen in September and October.

Both retail investors and institutional money managers are in love with this stock market similar to the late 1990s. The bulls, who consider themselves to be savvy, want to capture quick profits and get out in time before a decline. They want to do this because gains are coming quick. The anticipation of a stock market bubble entices people rather than scaring them away. We just had the best 100 day return for the S&P 500 ever. This type of excitement about a potential bubble makes for a self-fulfilling cycle of higher prices.

The AAII investor sentiment survey has been the ‘old guard’ of indicators as respondents in this survey have called the market a bubble and have stayed stubbornly bearish. In the week of August 12th, some bears capitulated. The percentage of bulls rose 6.7% to 30% and the percentage of bears fell 5.5% to 42.1%. There are still more bears than bulls and sentiment is still worse than average, but the survey moved closer to optimism. As you can see from the chart below, retail trading activity increased in June due to free online trading and the lockdowns. Even without the lockdowns, retail traders are still involved because stocks are moving higher.

Professional investors love this market just as much as retail. The NAAIM index rose from 94.55 to 101.2 which means the average investor is slightly leveraged long. The most bullish investor has been fully leveraged long for 10 weeks. The overall index has been above 90 for 5 weeks which is the longest streak since the one that started in September 2017 which was 7 weeks long. This was the highest reading since June 2018 which was 103.93. As you can see from the chart below, such readings don’t always lead to corrections right away. However, we think the streak of readings above 90 is more interesting. There is a buildup of euphoria which has occurred in concert with the spike in momentum tech stocks.

Inflation increased in the PPI and CPI reports. This is partially why the 10 year yield increased for 5 straight days. Higher yields could hurt tech stocks and precious metals. Retail investors and the pros are very bullish which is probably a bad sign. Trading activity using online brokerage accounts exploded in June. Retail traders started by buying the dip as they had disposable income and extra time. They are staying in the market because it has done well. The pros are levered long on average. They have been extremely bullish for 5 weeks.