How Much Of US Housing Is Overvalued? 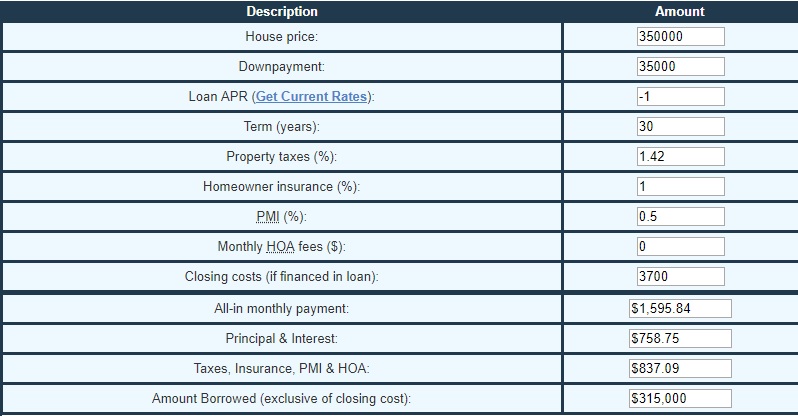 When rates first went negative, banks didn’t offer negative rates on deposits and mortgages, but now that has changed with the recent decline in rates. Whether mortgage rates are nearly 0% on the positive side or they are negative, this is a historic moment. Such low rates are difficult to imagine for US buyers even today as the average 30 year mortgage rate is 3.6%.

As you can see from the chart below, the Danish bank Jyske Bank is giving out the first negative rate mortgages.

The average European mortgage rate of 1.65% is the lowest since at least 2000. It’s ironic to see negative rates being given out on a 10 year mortgage since such low rates encourage borrowing for longer. The 20 year rate given out by Jyske Bank is 0% and the 30 year rate is 0.5%. Getting the 30 year mortgage makes the most sense since you can free up capital to invest elsewhere. To be clear, with a negative rate mortgage, the borrower simply pays slightly less than the principle owed rather than actually getting a check, but it’s effectively the same thing.

It’s highly unlikely negative mortgage rates will come to America. The current extremely low rates are already spurring housing demand as we will get to later in this article. The table below shows a hypothetical example of a 30 year mortgage with -1% rates.

It’s interesting to consider how much of an issue property taxes will become if they are a higher cost than interest. To homeowners paying already high rates, this is already a huge issue, but it could be amplified to the point where states and municipalities are forced to lower rates to keep people from leaving. Lower rates can do the amplifying. Property taxes can’t be paid off like a mortgage. They aren’t fixed like the rates in a fixed rate mortgage.

The decline in interest rates might spur the housing market. Acceleration in real residential investment growth and a strong consumer can help the economy avoid a recession even with manufacturing contracting. According to MBA, in July mortgage applications for new homes increased 31.2% yearly because of the decline in rates. Applications were up 11% sequentially. According to the MBA report, there will be an annual run rate of 754,000 new home sales in July. That sounds overly optimistic because there were only 646,000 sales in June. If sales were to increase by that much, estimates for real residential investment growth in Q3 would increase substantially. The July new home sales report comes out this Friday. In the August 9th MBA applications report, purchases were up 12% yearly, supporting the strength seen in July.

The August housing market index increased 1 point to 66 which matched estimates. That’s tied with May for the highest reading of 2019. This index was buoyed by the jump in the prospective buyers traffic index which increased from 48 to 50 which means traffic isn’t declining for the first time since October 2018. This index is a great measurement of first time buyers. These buyers aren’t fleeing the housing market because rates are so low. The present sales index was up 2 points to 73 which was the highest reading since October 2018. Expected sales in the next 6 months fell 1 point to 70.

On a regional basis, the West is looking really good. As you can see from the chart below, the West’s index was up 1 point to 75 which makes it the best region in the country. That’s the best reading in at least 1 year.

In July sales in Phoenix and Sacramento were up 10% and 6% yearly while their active inventory fell 14% and 16%. That shows demand is outpacing supply. The South’s index stayed at 69. It’s the nation’s largest market. The Midwest’s index jumped 5 points to 59, making it no longer the weakest region. The weakest region continues to be the Northeast which rose 2 points to 57.

The July housing starts report was mixed because permits and completions were strong, while starts were weak. As you can see from the chart below, housing starts fell from 1.241 million to 1.191 million. That missed the low end of the consensus range which was 1.21 million.

This Isn’t A Second Housing Bubble

Housing wouldn’t be nearly as affordable if rates increased. National prices might even fall if rates increased enough. However, that would be a potential example of a bond bubble, rather than a housing bubble. As you can see from the chart below, the CoreLogic Market Conditions indicators, which categorize current prices versus the prices sustainable by local market fundamentals such as disposable income, show 32.4% of metro areas were overvalued as of May 2019.

70.2% were overvalued at the peak of the housing market. This doesn’t even get into the delta of how much the expensive markets decoupled from the fundamentals. As you’d expect, millennials are moving towards the more reasonable priced markets. Of the top 10 cities millennials are moving to, 4 housing markets are undervalued, 5 have fair value, and 1 is overvalued (Salt Lake City).

Negative interest rates aren’t coming to the US mortgage market, but low rates are already spurring housing demand. It’s only a matter of time before the hard data housing reports (housing starts & new home sales) start showing modest improvement. They will likely have yearly growth later in the year as the housing market fell off a cliff last fall partially because mortgage rates increased. To be clear, the housing market is reliant on the labor market staying strong like the jobless claims report shows it is. The West had a strong Housing Market index. Permits and completions were strong, while starts were weak in July. Just 32.4% of 392 US metro areas are overvalued.