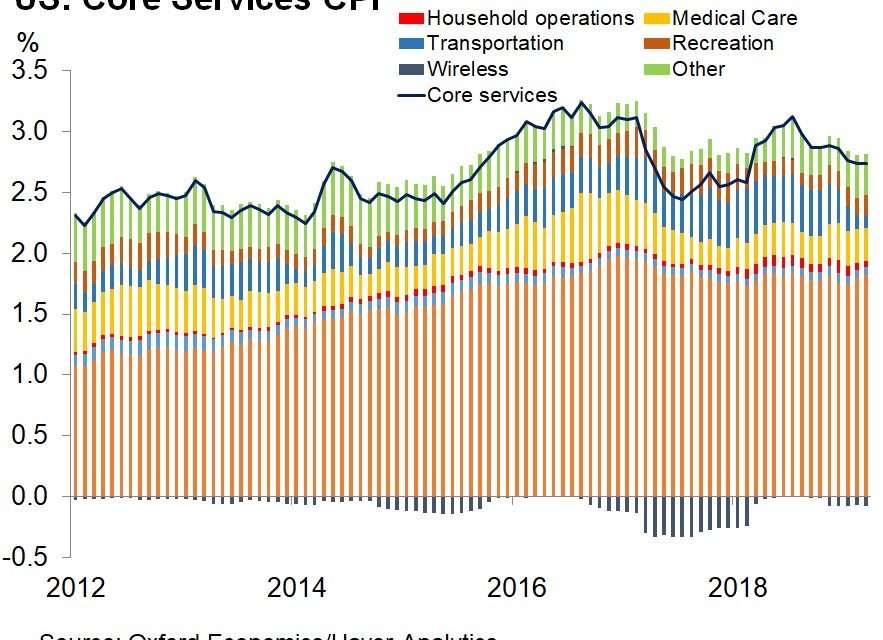 Just like we suggested would occur, the housing market is looking strong this spring selling season. This improvement could help the real residential investment component of GDP. It was negative every quarter last year. In March, purchase applications for newly built homes were up 7% annually because of lower mortgage rates. The demand is also helped by the stable labor market, declining yearly home price growth, and home builders shifting towards building more affordable homes.

The Housing Market Is Rebounding

As you can see from the chart below, the MBA purchase applications index has been in an uptrend for a few years.

2018 saw applications fall to the low end of the channel range. They are spiking this year. The purchase applications index in the week of April 5th was up 1% weekly on top of 3% growth in the previous week. The spring selling season is off to a strong start as yearly growth in the week of April 5th was 13% which matched this year’s peak. This spike is more important because it is happening at the busiest time of the year. This year has seen 10 positive growth prints and 3 negative growth prints.

Regardless of whether the consumer is correct on the economy, the housing market needs to look pretty good for someone to change their opinion on the economy in a negative manner, while shifting their viewpoint in a positive direction on housing. Buyers love falling rates. Some buyers pay extra to lower their rate; this decline in rates is like getting that for free.  On a weekly basis, refinancing actually fell 11% because it increased 39% in the previous week. This shift caused the composite index to fall 5.6% after rising 18.6%.

Refinancing has increased in the past few weeks, but it is low compared to earlier in this cycle as you can see from the chart below. The chart also shows delinquencies have fallen to 10 year lows.

Private loans should be fine next recession, but some FHA loans that were given to borrowers with below average credit scores and a debt to income ratio above 50% could be in trouble. Generally, the first few years of a mortgage are the toughest because wages increase over time and a mortgage payment is fixed. That’s one benefit to buying over renting as the rent usually increases after every new lease is signed. By the time you are at the end of your 30 year loan, the payment should be very easy to make.

Reviewing how data is rounded isn’t sexy when analyzing metrics, but it can explain the data better sometimes. That’s the case in the March CPI report. As the chart below shows, yearly headline CPI was 1.9% which beat estimates for 1.8% and last month’s inflation of 1.5%. However, rounded to the hundredths place, CPI was 1.86% which means the report was 2 basis points away from meeting estimates. That’s an important distinction because some investors will see the acceleration and headline beat and start to panic about runaway inflation. Rather, this report supports the status quo.

As the chart shows, yearly core CPI fell from 2.1% to 2.0% which missed estimates for 2.1%. When you round to the hundredths place you can see it wouldn’t have missed estimates if it would have been one basis point higher. Even though core CPI missed estimates, it was a very strong reading because the comparison was tough. From February to March 2018, core CPI increased from 1.85% to 2.12%. That means the 2 year stack increased from 3.93% to 4.16%. The Fed focuses on core PCE to set policy. Usually, core PCE is below core CPI, meaning the Fed has plenty of room to not do anything. Since yearly core PCE will probably be below 2% in March, the Fed won’t be pressured to hike rates to combat inflation. The PCE report will be released on April 29th.

Even though overall inflation didn’t move much, there were some underlying changes worth highlighting. There were 3 important takeaways from this report. Firstly, services inflation dominated commodities inflation. Secondly, sequential price growth improvement was seen in food and energy. Therefore, headline inflation will soon rise above core inflation. Finally, shelter inflation was still high despite the weakness in home price growth.

Core commodities inflation was zero. The weakest part of this was apparel which had prices fall 2.2%. Services less energy inflation was 2.7%. The chart below breaks down core services inflation. Shelter was once again a big component of inflation. Prices were up 3.4% which is only 0.2% off its cycle peak.

Food and energy inflation increased sequentially. Food price growth increased from 2.0% to 2.1% which was the highest growth since March 2015 when it was 2.3%. Food away from inflation was 3% and food at home prices were up 1.4%. Food at home prices are much more volatile. Speaking of volatility, gasoline price growth increased from -9.1% to -0.7%. Gas prices are about to be up year over year in April. As you can see from the chart below, national average gas prices have been up 57 straight days which is the longest streak since at least 2004. Headline inflation should rise above 2% in April.

The housing market is strengthening which should boost the real residential investment component of GDP in Q2. Housing leads the economy by the most out of the leading indicators. If the housing market is turning around, we need to restart the countdown clock for the next recession. Inflation isn’t an issue for the Fed. For now, the Fed can get away with not hiking rates. That’s allowing stocks to rally and the economy to potentially get out of this slowdown without a recession.