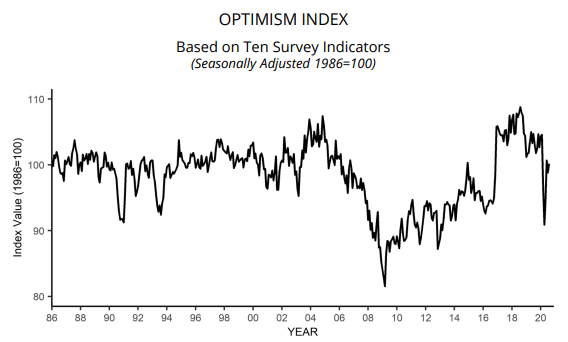 In August, the small business optimism index increased from 98.8 to 100.2 which beat estimates for 98.9. It’s no surprise small business confidence crept up. What is a surprise is how relatively optimistic small firms are in relation to last cycle. Many small firms were decimated by this recession. We wonder if there is survivorship bias here. The firms that would be pessimistic  went out of business, so they aren’t answering this survey anymore. We already know this survey shows more confidence when a Republican is president based on historical data.

The uncertainty index rose over 2 points to 90 which is the 2nd highest reading since March 2017. However, this was a strong report overall. There were two major underlying changes in the index. The net percentage of firms saying they had higher sales in the past 3 months compared to the prior 3 months rose 13 points to -15%. The net percentage with higher earnings trends in the past 3 months rose 7 points to -25%. This data point is usually negative. The key here is the rate of change improvement. These improvements make sense because the prior 3 months include March, April, and May which were the worst of the recession.

The net percentage of small firms raising selling prices rose 3 points to 1%. Inflation hasn’t come up yet. Small firms stated the single most important problem they face is quality of labor with 21% mentioning this. The next two were taxes and poor sales at 17% and 15%. It’s interesting that competition from big business was only listed by 9% of firms which isn’t unusually high. This goes against the prevailing wisdom that monopolies are holding the economy back. Maybe we have survivorship bias again in that no small firms even try to compete with big business, so it’s not a problem for them. It’s much easier to work with big businesses.

This recession has been absolutely terrible for some people. This is why economists point out how dreadful it is for people not to have enough savings to deal with a temporary loss of income. The reality is many don’t have enough savings because of income constraints, not because of an unwillingness to save. It’s expensive to be poor. For example, if you need surgery and don’t have health insurance, it costs tens of thousands of dollars. If you need a quick influx of cash, interest rates are high. Credit card rates are above 20% even with record low interest rates. If you have money, it’s easy to get a loan with very low interest rates.

The unfortunate reality is corporate earnings can go up even if the bottom quartile of consumers does poorly because they don’t have much spending power. That’s why setting fiscal policy based on the stock market is a mistake. As you can see from the chart above, there has been a massive spike in the percentage of households that sometimes go hungry. This spike is much larger than the increase after the financial crisis which was the worst recession since the Great Depression and caused Americans to lose their homes. Over 10% of households sometimes go hungry. This is a hugely negative societal shift that will likely have political and economic consequences.

The price to book value ratio doesn’t matter much outside of reviewing bank stocks. As you can see from the chart below, as of 2019, 84% of S&P 500 assets were intangible. That percentage has increased in the past few decades with only 32% of assets intangible as of 1985. This doesn’t mean value investing is dead. There are other metrics that go around this issue. You can look at PE ratios and EV/EBIT. The EV to EBIT ratio is used by the QVAL and IVAL value ETFs.

It’s important to recognize secular changes without getting caught up in the latest market action. For example, a sign of euphoria is valuing stocks based on optimistic expectations for their future sales. That’s why it’s great to see something like the chart above which shows data from many years back. Value investors can’t blame these changes to assets on the balance sheet on the recent speculation in tech stocks.

Startups Are Getting Smaller

As you can see from the chart below, the average startup in America and a few states in the Midwest has seen a steady decline in the average number of employees. Specifically, it’s down from about 5 to 4 from 1994 to 2019 which is a 20% decline.

This decline coincides with the decline in the share startups have in the labor market. This isn’t exclusively due to the information sector, although, recognize that every sector has been permeated by tech which has led the economy to be more knowledge driven as the chart above refers to. Over time, leisure and hospitality startups have about 10 workers. With the current environment bad for this industry, startup employment must be suffering. Manufacturing and information averaged 6 and 5 workers, while construction averaged 4.

This data seems to be in a steady downtrend as it’s not impacted the cycle. That being said, information spiked from 5 to 8 employees per startup in the tech bubble in the 1990s before falling back to 3 in 2019. This low level speaks to the inequality in the economy since less people are benefiting from the rapid success of today’s tech startups. Furthermore, the tech giants have fewer employees than the giants of the past (in other industries).

Small business confidence increased slightly. Optimism is very high compared to the anecdotal stories of weakness. The share of Americans going hungry has increased; this recession hurt the most vulnerable the hardest. Intangible assets are more important than ever. However, notice that there are other ways to measure valuations. Value stocks can still exist even if you look past the price to book value. The average size of startups has decreased over the past 25+ years which has led to startups having a smaller impact on the labor market.