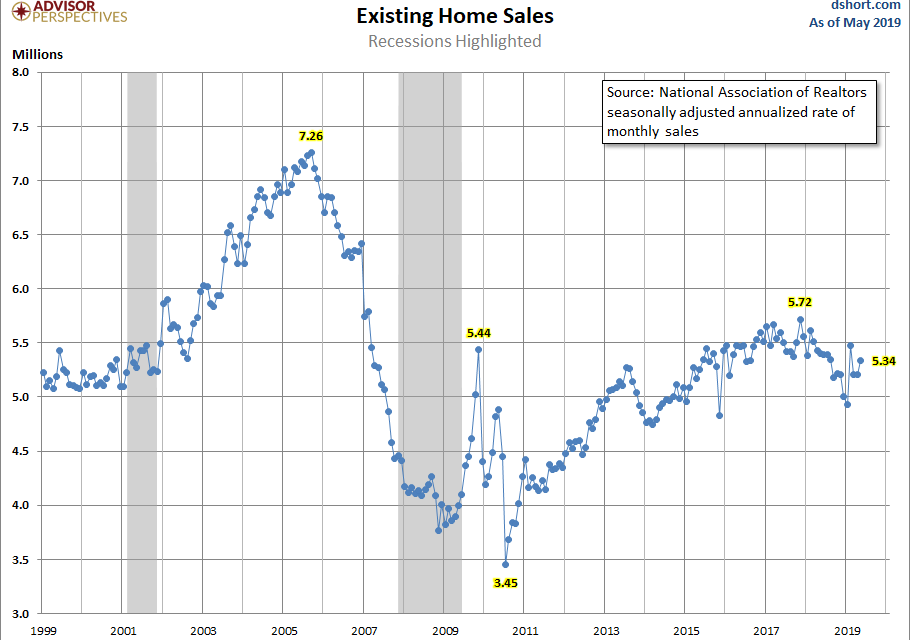 The S&P 500 is up 17.7% year to date as of June 21st. That’s a fantastic run for an economy headed in the wrong direction. It’d be amazing performance even if the economy was seeing accelerated growth. Specifically, the S&P 500 hasn’t been up 15% headed into the last week of the first half since 1998. Another interesting tidbit is most metrics don’t show investors are euphoric. That’s possibly because people are fearful of a recession and the trade war with China.

The CNN Fear and Greed index is at 52 which is neutral. The AAII individual investor sentiment survey showed 29.5% of investors were bulls and 32.1% were bears. It’s weird to see more bears than bulls near record highs. As of June 19th, the NDR trading sentiment composite for the S&P 500 was at 45.56 which is neutral. One place where there is euphoria is the treasury market as its NDR reading was at 67.34 which is excessive optimism.

It makes sense to start thinking about how assets will react to the first Fed rate cut because there is a 100% chance the Fed cuts rates in July according the Fed funds futures market. Traders are so confident in a cut that there is even a 32.3% chance the Fed cuts rates by 50 basis points. The table below shows how various assets and asset classes do after the first rate cut of the cycle.

It’s tricky because either this is a precautionary rate cut which will be reversed in the next few quarters when the economy rebounds or this is a rate cut before a recession.

As you can see, the S&P 500 only gives 2% returns after the first cut. That’s pretty bad when you consider more than all of those gains come in the first 3 months where stocks increase 2.9%. High yield bonds (excess returns over US Treasuries) do the worst as they fall 13.8% and Brent oil does the best as it increases 13.5% over the next year. WTI oil increased over 9% in the past week because of the dollar’s decline and the geopolitical tensions between Iran and America. That was the best week for oil since December 2016.

The June Markit Flash PMI was even worse than the May PMI which puts it on the cusp of showing the economy is contracting. This makes it look like a recession is coming soon although it’s still too early to tell. The flash composite index fell from 50.9 to 50.6 which is the lowest reading in 40 months. Anything below 50 is a contraction. As you can see from the chart below, the services activity index fell from 50.9 to 50.7 which is also a 40 month low.

This is one of the worst readings this cycle. Furthermore, the future expectations index fell to 57.8 which is the lowest reading in the 9.5 year history of this series. It is 13 points below its average and down 8.5 points since January.

The manufacturing sector was even worse as the manufacturing PMI fell from 50.5 to 50.1 which is the lowest reading in 117 months. The manufacturing output index fell from 50.7 to 50.2 which is a 37 month low. Keep in mind, the flash readings are just from the first half of the month. However, this index was similarly weak in May meaning it might not jump higher in the 2nd half of June. The payrolls index in this report was the weakest since April 2017 as Markit predicts there will be 140,000 jobs created in June which isn’t terrible as there were only 75,000 added in May.

The business outlook index hit its all-time record low. This series was started in July 2012. Using the data from the 3 months in Q2, Markit expects Q2 GDP growth to be 1.4% which is slightly lower than the consensus of 1.9%. 2/3rds of manufacturers attributed some or all of their higher raw material cost increases to tariffs, but the impact was canceled out by the weakness in demand which is what Oxford Economics predicted.

Not only is the economy weak in June, but also the outlook for the start of 2020 is getting worse. While the ECRI leading index has increased in the past 2 weeks from 144 to 144.6, the yearly growth rate has fallen from -1.3% to -2.3%. The stock market has helped it, but tougher comps have hurt it. This index leads the economy by 2-3 quarters which means there will be weakness in the beginning of next year. We are now in the weak period predicted by this index in December and January. The coincident indicator for May was just released. It showed growth fell from 2.3% to 2%. It’s still about double the growth trough in 2016. So far, this indicator says this slowdown isn’t the worst of the cycle.

The May existing home sales report was solid as the decline in rates might be helping the housing market finally. April sales were revised from 5.19 million to 5.21 million. As you can see from the chart below, there was a 2.5% monthly increase in May as sales were 5.34 million which beat estimates for 5.28 million. Yearly growth improved from -4.1% to -1.1%. Resales were up 4.9% to 1.920 million.

Sales prices were up 4% monthly and 4.9% yearly to $277,700. This was the biggest price increase since August 2018. This is the 87th straight month of yearly gains. You can see the sales prices in each region in the chart below.

The May leading economic index is close to signaling a recession. The ECRI leading index is down yearly again. The Markit Q2 readings indicate there will be just 1.4% GDP growth. This explains why the Fed is about to cut rates for the first time this cycle. On average in the past 5 observations, stocks return just 2% in the year after the first cut. At least the housing market is doing okay as existing home sales increased 2.5% monthly. Later this year, yearly growth should be positive because the comparisons are easier as housing was weak in Q4 2018 when interest rates were much higher.