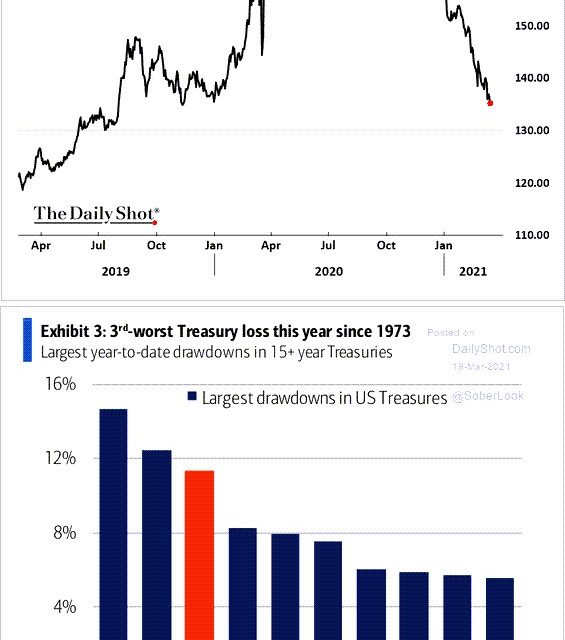 In the past few months many have said the treasury market was oversold. That was irrelevant because the long bond yield had a fundamental reason for increasing. Imagine if a stock gets a buyout offer and it spikes. No one would short that stock because it is technically overbought. You’d only short it if you think the buyout offer won’t go through. Technical signals generally shouldn’t be the only reason you make a trade.

As you can see from the chart below, this has been the 3rd largest year to date drop in the long bond since 1973. That includes a period with spiking rates. This move has now gotten historic. Don’t get too excited though because the timing of selloffs matter when you’re looking at year to date numbers. It’s random that the confluence of events leading to the selloff in treasuries occurred at the end of last year and the beginning of this year.

You need to decide how much room the trade has left. If you think the 10 year yield can go to 2%, why fear a 10 basis point drop because the long bond is oversold? If anything, you should add to the trade if the yield falls enough when it corrects. On the other hand, if you think the 10 year yield peaked, any short term down move is problematic. You should exit the trade now. This scenario example essentially explains how the near term price action of an investment is irrelevant if you don’t plan on selling. However, it is everything if you want to sell.

You can pretty much tell by looking at a stock’s chart whether it is a long or short duration play. There aren’t many stocks that aren’t on one side. Fundamental investors are getting very impatient with the action because for the past few months, actual company performance hasn’t mattered. The only thing that has mattered is how it does with rising rates.

If you’re a long term investor, this is mostly short term noise. The problem is if you are a long term investor, you shouldn’t exclusively fill your portfolio with growth stocks with high multiples. Many investors did this which is why they are forced to worry about the 10 year yield. People ignored diversification because they didn’t see interest rate risk as real until it hurt them.

The trade is so simple which gets investors who focus on individual companies irate. If the stock is in energy or banking, it likes higher rates. If it is in tech, it hates higher rates. The lower the multiple, the better. The higher the multiple, the worse off the stock is. You probably shouldn’t be buying risky stocks with high multiples either way. This was just the catalyst to end the trade.

Energy is short duration because investors believe most of its earnings will come within the next few years. They don’t think it has long term viability. Fossil fuel usage might not peak until 2050, but some companies might not have enough inventory to last that long, especially frackers which have high decline rates. Obviously, higher inflation is also a big win for energy.

Long duration secular stocks become almost like treasuries if they get to be expensive enough. Investors price in their growth as if it is a given; their free cash flow yields fall to the low single digits. That’s why they don’t like when long yields increase.

Cloud stocks are an example of stocks that were priced based on the long yield. Investors probably shouldn’t act as if their growth is a given anyway. There should be a benefit to taking a risk on the stock. Either way, investors now need to sell these stocks because the long yield offers more competition. If you own a stock that falls when the 10 year yield hits 2%, it was probably too expensive anyway.

The strength of the correlation is bonkers. From February 8th, the median EV to NTM sales multiple has a -93% correlation with the 10 year yield. As you can see from the chart above, since 2015, the correlation is -50%. The cloud stocks got more sensitive to yields because they got so expensive. No cloud investor would care about the 10 year yield if they owned stocks at a price to sales ratio of 5. They care because they own extremely expensive stocks.

It’s up to personal interpretation what is and isn’t predictable. It seems like bitcoin has become predictable because so many new investors are profiting from simply following the trend. It would be ironic if the asset known for supporting free markets wasn’t efficient itself.

As you can see from the chart above, bitcoin now represents 0.7% of the global multi-asset diversified portfolio. If you don’t own any crypto, you aren’t in line with the average passive portfolio. That’s probably not a bad thing. You don’t want to chase assets exhibiting bubble-like tendencies just to match the market.

The selloff in treasuries has been historic. It has been justified based on the fundamentals. This selloff has been a huge victory for short duration stocks like energy. It has been bad for expensive cloud names. The overall market isn’t efficient because you shouldn’t be able to ride trends this easily. Bitcoin is now making an appearance in the global multi-asset diversified portfolio. It has officially become mainstream. Institutional investors are involved. The bigger it gets, the more systemically important it becomes. If bitcoin were to double from here and then fall 90%, it would have a huge impact on financial markets.