Higher Taxes Not Bad For Stocks? 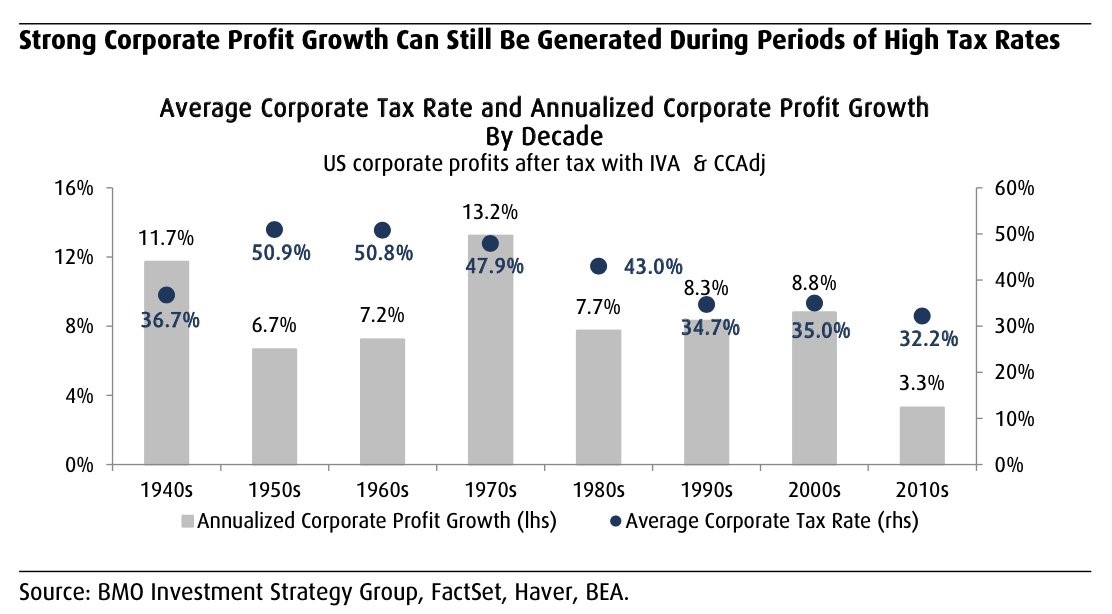 Raising the capital gains tax rate won’t be bad for equities. Of course, it’s bad for total returns if you plan to sell with gains though. The capital gains tax increase probably will only hurt the super-rich. If you are one of them, you might want to change your strategy towards buying secular growth stocks that you won’t sell for years. The problem with that strategy is everyone is doing that right now due to low rates. It’s not easy to buy cyclicals, but it can be very profitable when they are hated.

There is no discernable correlation between tax rate changes and returns in that year. You can argue the tax cut helped stocks in 2019, but we think there were many reasons stocks did well in that year. The economy rebounded, valuations started the year low, and the Fed became more dovish in late 2018.

We can’t end our discussion of taxes with just looking at the impact on the overall market because each sector will be affected differently. Each company will also will be affected differently. Some investors might decide to ignore this because this doesn’t impact the business. It just mildly changes valuations. You have to be an expert on taxes to know how a new law will impact a company’s effective tax rate. You can decide to be conservative and do your valuation calculations based on a tax rate of 28% instead of the current 21%.

The 2nd chart above shows the number of firms in each sector that could be impacted by the 15% global minimum tax. This is aimed at the trillion dollar tech companies. These firms are so big that they can determine tax policy. As you can see, 20 tech firms had over $2 billion in net income and a less than 15% effective tax rate in one of the past 3 years. It isn’t sustainable for companies to pit countries against each other, making them lower than tax rate to acquire jobs. Global governments are about to fight back against this policy. We will see companies with HQs in countries that make more sense in the future if this is adopted.

Rent Inflation Is Coming Back

As we have been saying in the past few months, rent inflation is going to increase fairly rapidly this summer and fall. The pandemic is close to ending and so will the eviction restrictions. As you can see from the chart below, rent price increases declined quickly in April 2020. They fell throughout the year. They increased for the first time in March even though the comp wasn’t easy. Rent prices were up 1.1% which is still a small increase.

The easier comps and demand for housing in the city will cause rent inflation to spike soon. Moving is a big deal. People want to know for sure that it’s safe. It’s certainly safer than it was 3 months ago, but we are still a few weeks away from true safety. Bloomberg estimates that at the current rate America will have 75% of the country vaccinated in 3 months. However, keep in mind Israel defeated COVID-19 with about 60% of the country vaccinated. Furthermore, the 7 day average of new cases in the US has fallen to 51,465 which is the lowest since October 12th. The 7 day average of deaths is 697 which is very close to the trough since last spring.

In the week of April 24th, RedBook same store sales growth was up 40 basis points to 13.9% which is very strong. Furthermore, the 7 day average of 2 year BAC card spending growth in the week ending April 24th was 20%. The weakness in the prior 2 weeks is over. We don’t know what caused that.

A lot of this money is being spent at bars and restaurants. As you can see from the chart above, pub-going is recovering rapidly. It’s now safe for people with the vaccine to go out to bars.

If the corporate tax and capital gains tax rates are raised, it won’t impact stocks. A higher corporate tax rate won’t even hurt corporate profit growth. A higher rate will impact utilities the most; a global minimum tax rate will impact 20 tech firms. Rent price growth has bottomed. It’s about to spike higher over the next 6 months. People are returning to pubs now that the vaccine has been widely distributed.