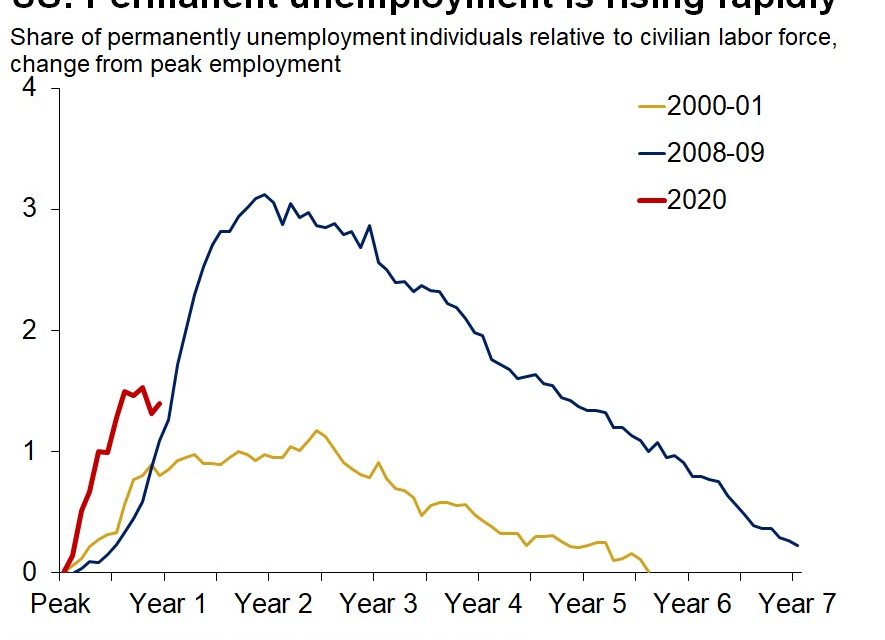 Job creation in January was good given the circumstances (the third wave of the pandemic). We’ve seen three straight weekly declines in jobless claims to end the month which implies the potential for improved February job creation. In the survey week of the January BLS report, the decline in COVID-19 cases and hospitalizations was only beginning. Some economists and investors got excited prior to this report because of the strong ISM services index and the solid ADP report which showed 174,000 private sector jobs created. That hype wasn’t realized. ADP was wrong by a wide margin as there were only 6,000 private sector jobs added.

The biggest negative of this report was the revision as December turned out to be a very bad month for the labor market. Overall job creation was revised down from -140,000 to -227,000. There was a massive step down in private sector jobs added as it went from -95,000 to -204,000. On a sequential basis, January’s numbers were better, but we can’t claim victory because we didn’t know how bad December was until Friday. There were 49,000 jobs added in January which only missed estimates by 1,000. However, private sector estimates were missed by 29,000 (6,000 were created). That means government job creation beat estimates by 28,000.

Given the strong manufacturing ISM manufacturing report (employment up 0.9 to 52.6), it’s surprising the sector lost 10,000 jobs. That missed estimates by 40,000 and fell 41,000 sequentially. The best part of this report was that information added 16,000 jobs as this is the highest paying industry. There were strong composition effects which boosted wage growth as information and professional & business services (up 97,000) created the most private sector jobs and pay workers well, while leisure & hospitality lost 61,000 jobs and it pays workers the least. Leisure and hospitality has had a downturn in job creation in the past two months. This is like pushing down a spring. There should be a massive reversal in March. We will consistently see over 100,000 jobs added in the industry per month in the spring & summer.

Last month was a great report for permanent job losers as they fell from 3.718 million 3.37 million. As you can see from the chart below, there was some give back in January as permanent losers rose to 3.503 million. It looks like this might be stabilization before the recovery in this indicator. It’s weird to see this indicator fell sharply in December now that we know how bad its labor report was. Temporary layoffs rose from 2.762 million to 3.039 million last month. They fell to 2.746 million in January. It’s weird to see this decline in January since there were so many losses in leisure and hospitality. Maybe this means restaurants and hotels went permanently out of business.

The amazing wage growth in January was because of composition effects. If an information job is created and a leisure & hospitality job is lost, the average pay increase, but no one is getting a raise. Hourly wage growth was just 0.2% on a monthly basis because of the tough comp of 0.8%. However, yearly growth was 5.4% which beat estimates by 4 tenths. That was the same as December which had a 3 tenth positive revision.

The length of the work week increased from 34.7 hours to 35. It’s very rare for the work week length to increase that much and it’s even rarer for it increase so much with high wage growth. This is a record high work week going back to 2006. The 0.3 increase was the 2nd highest in a month ever. Longer work weeks and higher hourly wages combined made for a massive spike in weekly earnings growth. Yearly growth was 7.5% which is the 3rd highest reading since 2006 (best 7.6%).

Defense stocks usually are great performers and are currently cheap. As you can see from the chart below, in the past 65 years, the defense index has increased at over 4 times the rate of industrials and about 3.5 times the rate of the market. That’s because it outperforms during recessions. The table below shows the past 4 recessions in which it beat the market handily. In 2 of the 4 recessions, the Defense budget growth rate was positive. Only once was it significantly negative.

The labor report was weak on an absolute basis, but it was better than December. There was positive job creation which is about all you can hope for in a pandemic where entertainment is shutdown. The worst part of the report was the increase in permanent layoffs. The defense industry has outperformed the market in the past 65 years. On the negative side, it usually outperforms the market in recessions (the economy is headed for an acceleration, not a recession).